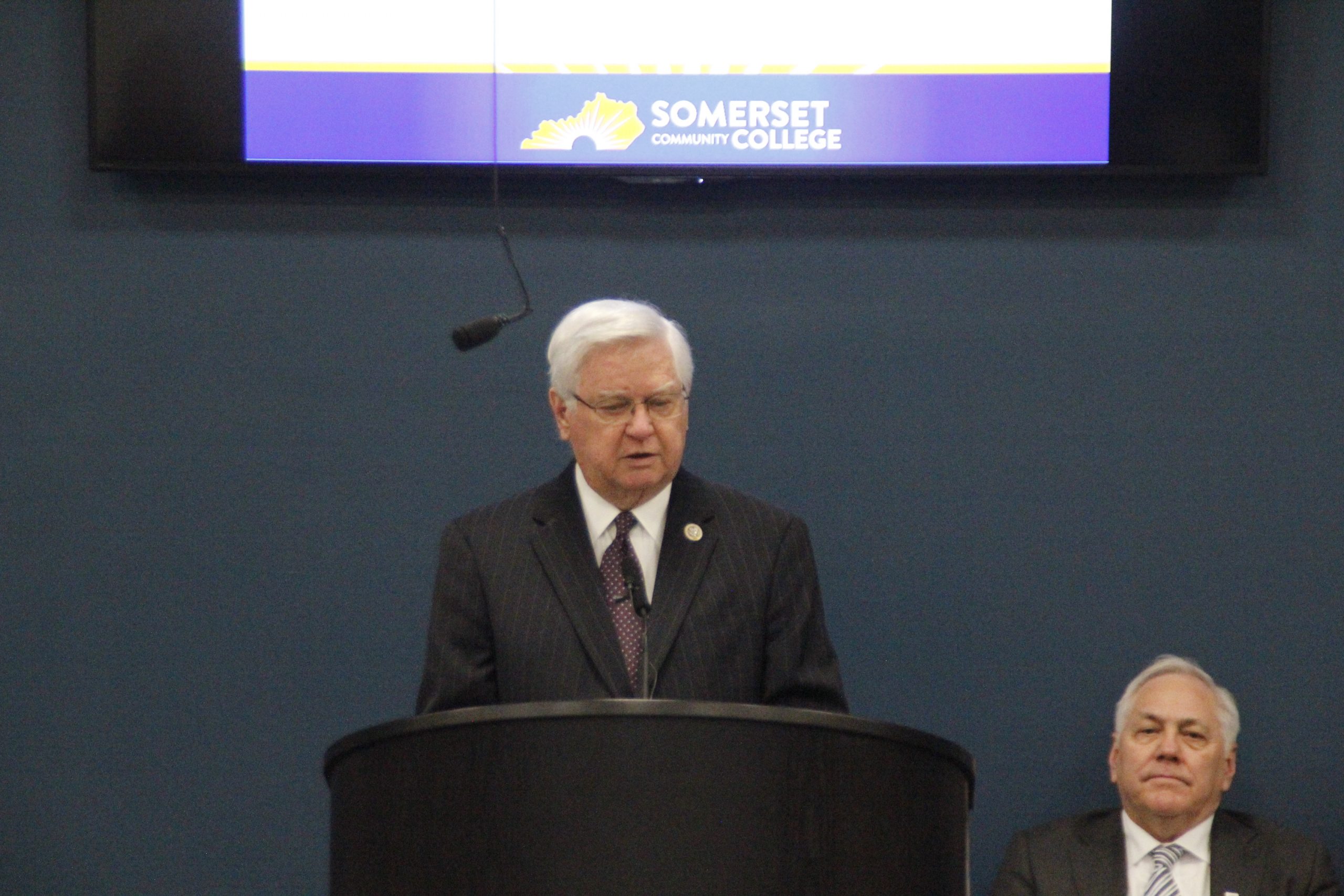 By Greg Bird
Congressman Hal Rogers was in Somerset Monday for a significant announcement that will have a strong impact on education in the southern Kentucky Region.
Joined on stage by Dr. Jay Box, President of the Kentucky Community and Technical College System and Dr. Carey Castle, President and CEO of Somerset Community College the Congressman introduced the plans for the University Center of Southern Kentucky that will begin operations next fall. The initiative will offer four-year baccalaureate degrees to students on the grounds of Somerset Community College.
“The one thing missing from the Lake Cumberland region is the option for students to get an affordable bachelor’s degree,” Rogers said. “Now spring graduates in May 2019 will have the option to stay here at home to get a four-year degree at an affordable rate
“Instead of a single university, this will be a multi-versity,” Rogers continued. “Because students will be able to choose which university offers the best degree for their career path without leaving Somerset. Opening a new door for education here at home is a key factor to ending the out-migration of our best and brightest students.”
The Congressman touted the potential economic impact for the region as the new center will allow more students to earn their degrees in their home area, allowing them to save money on housing, travel and meal plans, as well as making it more likely they will stay in the region after graduation to find work.
“If more students are educated here, they will stay here.”
The Center will work in conjunction with other universities to form partnerships with the center, offering classes and programs on the Somerset campus. Upon graduation from SCC with their Associate’s Degrees, students will be able to choose from a partnering university of their choice and complete a four-year Bachelor’s Degree right on the Somerset Campus.
Tuition and fees will be determined by the partnering schools, but students could potentially save thousands of dollars a year on education costs by eliminating the need for housing, travel and other expenses associated with studying at a university away from their home town.
Details on what schools and programs are still in development, and will be announced once agreements are finalized.
“The drive to succeed doesn’t have to involve driving great distances to obtain a Bachelor’s degree,” said Dr. Castle. ”You will now be able to get your degree in Somerset at the University Center. It is a mix of institutions that are complementary and different. I think the opportunities are going to be great for this region.”
Dr. Box echoed the benefits for local students.
“This center is a win-win for students in the Somerset area because it will allow them to get a four-year degree at SCC,” he said. “I applaud Congressman Rogers’ leadership in making this partnership happen.”
Congressman Rogers compared the Center to the University Center of the Mountains located on the Hazard Community and Technical College. UCM was established in 2004 and partners will 11 colleges and universities such as Eastern Kentucky, Midway, Morehead and University of the Cumberlands. Over the past 14 years UCM has helped award over 2,000 degrees to students.
Somerset does not currently have a college directly offering four-year degrees, but Campbellsville University has a regional center located in the city and Lindsey Wilson College offers some classes through their community campus at SCC.
Local businessman J.C. Egnew was on hand for the announcement, calling it a “brilliant plan and program.” Egnew said the University Center will allow the region to “enhance our ability to respond to changes in the future.”
UCSK’s first director will be Trent Pool, who has worked with Somerset Community College for 16 years.
Prior to the announcement, a group of approximately 100 leaders from the Lake Cumberland region met on campus to discuss support and guidance for UCSK, establishing the university center’s Founder’s Club. The club elected the following leaders: Chairman Bill Turpen of Somerset, Vice-Chair Paula Thompson of London and Secretary Cindy Clouse of Somerset.