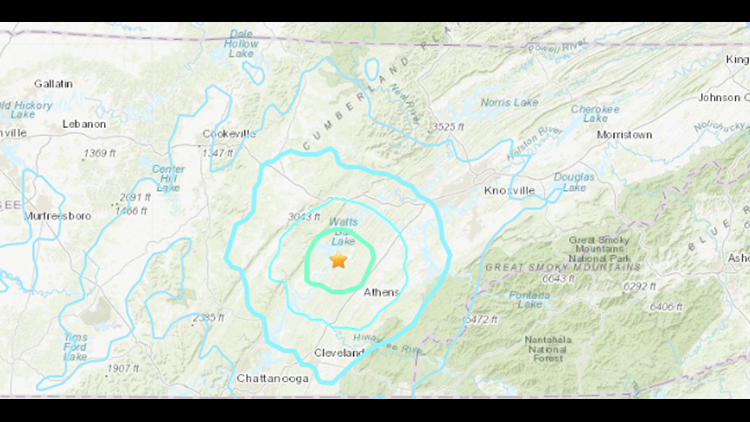 By Greg Bird
If you felt the earth move in the middle of the night Wednesday, you weren’t alone.
The United States Geological Survey reported two earthquakes struck eastern Tennessee, with the effects of the quake being felt as far away as Atlanta in the south.

Several McCreary Countians also reported feeling the shake-up on their social medial feeds.
The first tremor hit around 4:45 a.m. The epicenter was located about 11 kilometers north-northeast of Decatur, with a depth of 9 km. About 15 minutes later a second quake was felt in the same area at a depth of 6.8 km.
The first quake, with a magnitude of 4.4, was the second strongest on record for eastern Tennessee the National Weather Service in Morristown tweeted. In 1973 a quake recorded at a magnitude of 4.7 was felt in Maryville.
The follow-up quake was less intense, just 3.3 on the scale.
No injuries or damage from either quake was reported in Tennessee. The Watts Bar Nuclear Power Plant, operated by the Tennessee Valley Authority, reportedly suffered no damage as well the TVA stated.
McCreary County Emergency Management Director Stephen McKinney stated he had not received any reports of damage locally as well.
The last significant earthquake felt in McCreary County occurred in November 2012, when a 4.3 magnitude quake was centered in Blackey, Kentucky – with a follow-up aftershock immediately afterward. Several citizens reported felling the effects of that quake.
In January of 2009 a 3.1 magnitude earthquake occurred about 17 miles east of Pine Knot, just west of Williamsburg. No damage or injuries were reported as a result.