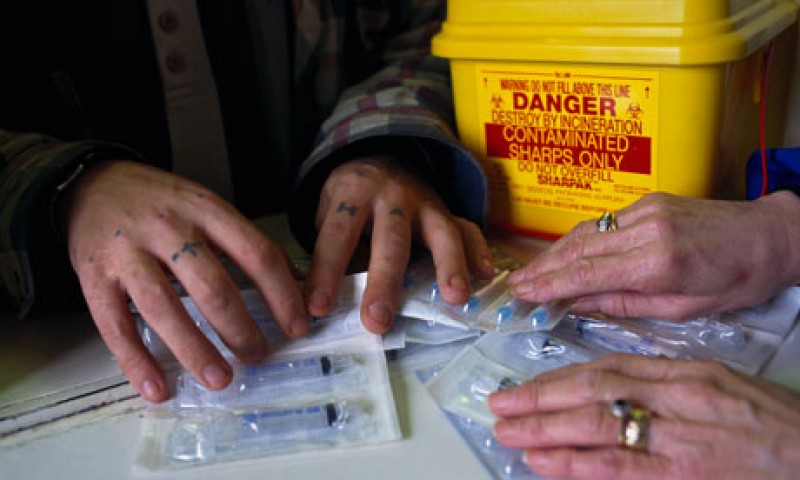 Officials at the Lake Cumberland District Health Department (LCDHD) are happy with how McCreary County’s needle exchange program is progressing thus far. According to the Department’s Director of Nursing, Laura Woodrum, changes in processes have been made over the past year as seen fit to better serve clients and community. Since the inception of the program, Woodrum says there has been an increase in visits and participation. Woodrum attributes the increases to better awareness of the program and reduction of stigma within the community.
Begun locally in McCreary County in 2017 as a way to reduce the spread of blood borne diseases such as Hepatitis C and HIV which are often spread through tainted, improperly disposed of needles, McCreary County’s needle exchange program supplies unused needles to those who bring used needles into the local health department office for proper disposal. Those who participate in the needle exchange program remain anonymous.
In addition to properly disposing of used needles and offering clean needles to those who participate in the needle exchange, the Health Department offers disease testing and drug counseling to participants who ask for those services. However, neither disease testing or drug counseling are required.
The increase in number of participants in McCreary County’s syringe exchange can be determined by comparing data on the LCDHD website. Since November of 2017 through the end of 2018, McCreary County Health Department has had 907 total visits for the needle exchange program. Locally, the Department has a 77% collection ratio with 36, 512 new syringes handed out in exchange for 28,123 used needles. (Clients aren’t required to bring syringes in on the first visit which results in the dispensed total being more than the collected total.) In those participants who made repeat visits (return clients), there was a 97% exchange rate excluding the first visit. From December 2017 to December 2018, the total number of visits in McCreary County increased from eighteen to fifty-eight. In the same period of time, the number of repeat or new unduplicated visits increased from eleven to forty-six. Two of the forty-six visits in December 2018 were new visits.
Thus far, there have been 195 total clients for the McCreary County needle exchange. Approximately 59% of the total self-reported injecting suboxone, and approximately 53% reported injecting meth. Other injection reports included the injection of cocaine, heroin, and other opioids. The self-reported frequency of injections ranged from one to eight times weekly on up to nine or more times daily as was reported by 89 participants.
Of the 195 total clients for the McCreary County Health Department (two of the clients were from Pulaski County), two tested positive for HCV (Hepatitis C) and fifty-nine self-reported being HCV positive.
In an effort to further maximize effectiveness of the local needle exchange program, LCHDH has partnered with Adanta and plans to have a peer special support counselor available for participants to help with the syringe exchange and offer additional treatment referrals and services.
Including McCreary County’s program, there are four operational syringe exchange programs in the ten county Lake Cumberland District Health Department. Woodrum said the LCDHD hopes to expand their syringe exchange program to additional counties within the district.