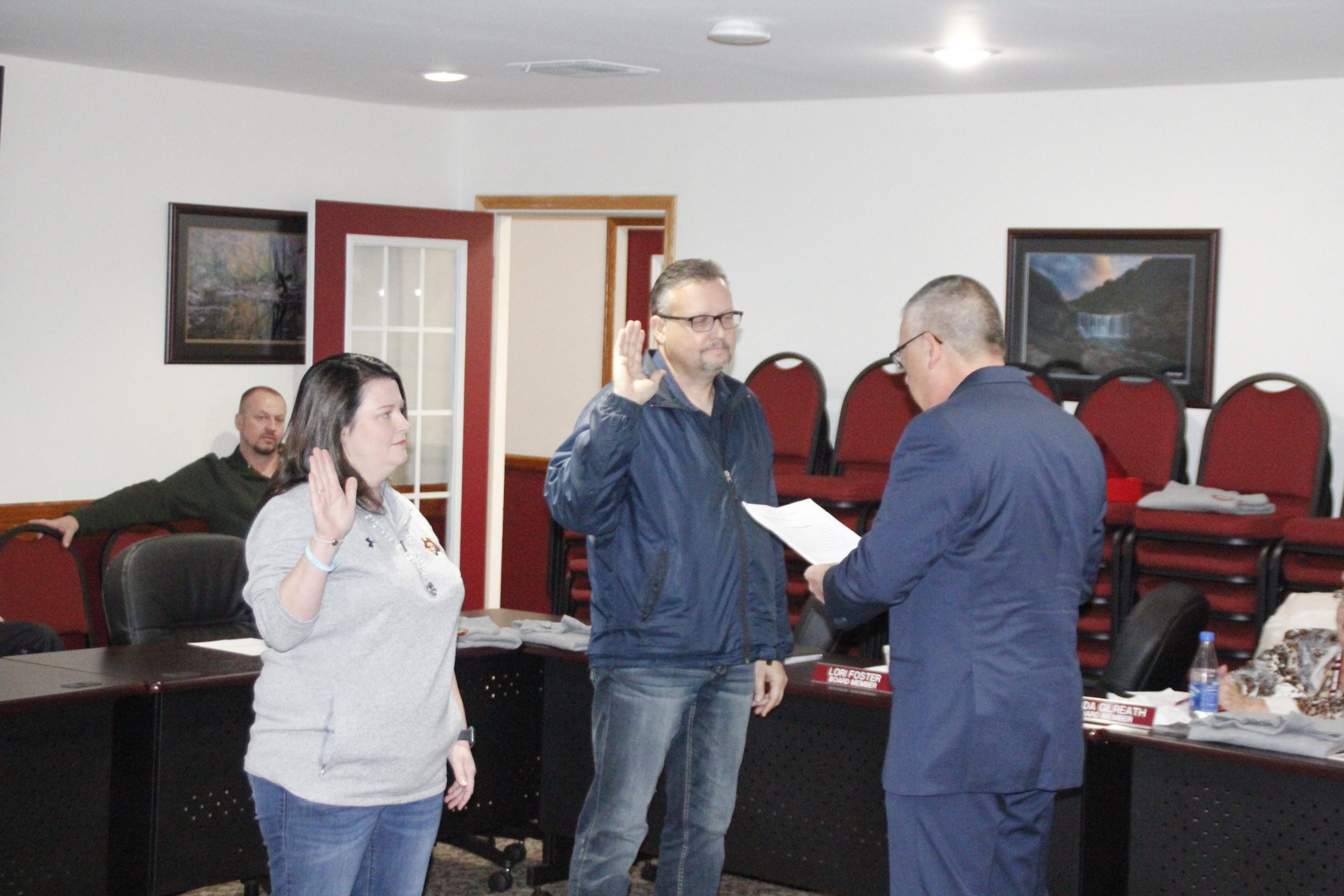 Newly-elected McCreary County Board of Education members Lori Foster and Braxton King were officially sworn in to their positions Tuesday night at a special called meeting at the Board Office. Foster, representing District 4 and King, District 2, were administered their oath by Judge Executive Jimmie “Bevo” Greene.
With the new members in place the Board elected Dustin Stephens as the new Chair, replacing Brandon Kidd, while Debbie Gibson retained her role as Vice-Chair.
The Board voted to make a change in their regular meeting date, moving the meetings to the fourth Monday of each month, as opposed to the Fourth Thursday as it had been in the past. The change in date will officially begin in February, as the January meeting had already been scheduled.
In honor of School Board Recognition Month Superintendent Mike Cash read a proclamation issued by Judge Greene and presented the Board with a mug emblazoned with the district logo.
Following the ceremony and re-organization Superintendent Cash held a working session with the Board and district leadership who provided updates and answers to questions the Board had asked.
Cash presented a lengthy review of Board duties and powers to acquaint the new members with their duties while in office and to provide a groundwork as they move forward.
The Board had asked about last month’s decision to hire a tele-therapy service to help provide speech therapist services to students in the district. Special Education Director Amelia Stephens stated there currently was a shortage of licensed speech therapists. The district has one therapist is on medical leave and a second vacancy, leaving two positions open at the time. The job has been posted for several months, and an active search had been done to recruit someone to fill the vacancy, but no applications had been received.

Stephens said the move to use tele-conferencing to fill the gap was necessary at this time since the district is required by law to provide speech therapy for students who require it. The move will allow the district to meet their legal requirements, and make up for any sessions missed over the past few months.
She added that the district is actively pursuing a potential candidate for the vacancy, but they would not be available until after the spring once they graduate.
The Board also spoke with Transportation Director Stuart Shepherd and driver Greg Burdine concerning the shortage of bus drivers in the district and what could be done to attract new employees.
Burdine stated the shortage is not limited to McCreary County, and most districts in Kentucky are experiencing a similar situation. He noted the current drivers for the district are pleased with the Board’s efforts to improve the bus fleet and conditions at the bus garage. Burdine said one thing the Board may be able to consider is finding a way to add more bus monitors to the fleet to aid in supervising the children while on the busses.
Around 9:15 p.m. Board member Debbie Gibson called for a motion to adjourn.

The regular scheduled meeting of the Board of Education will be next Thursday at 6:30 p.m.