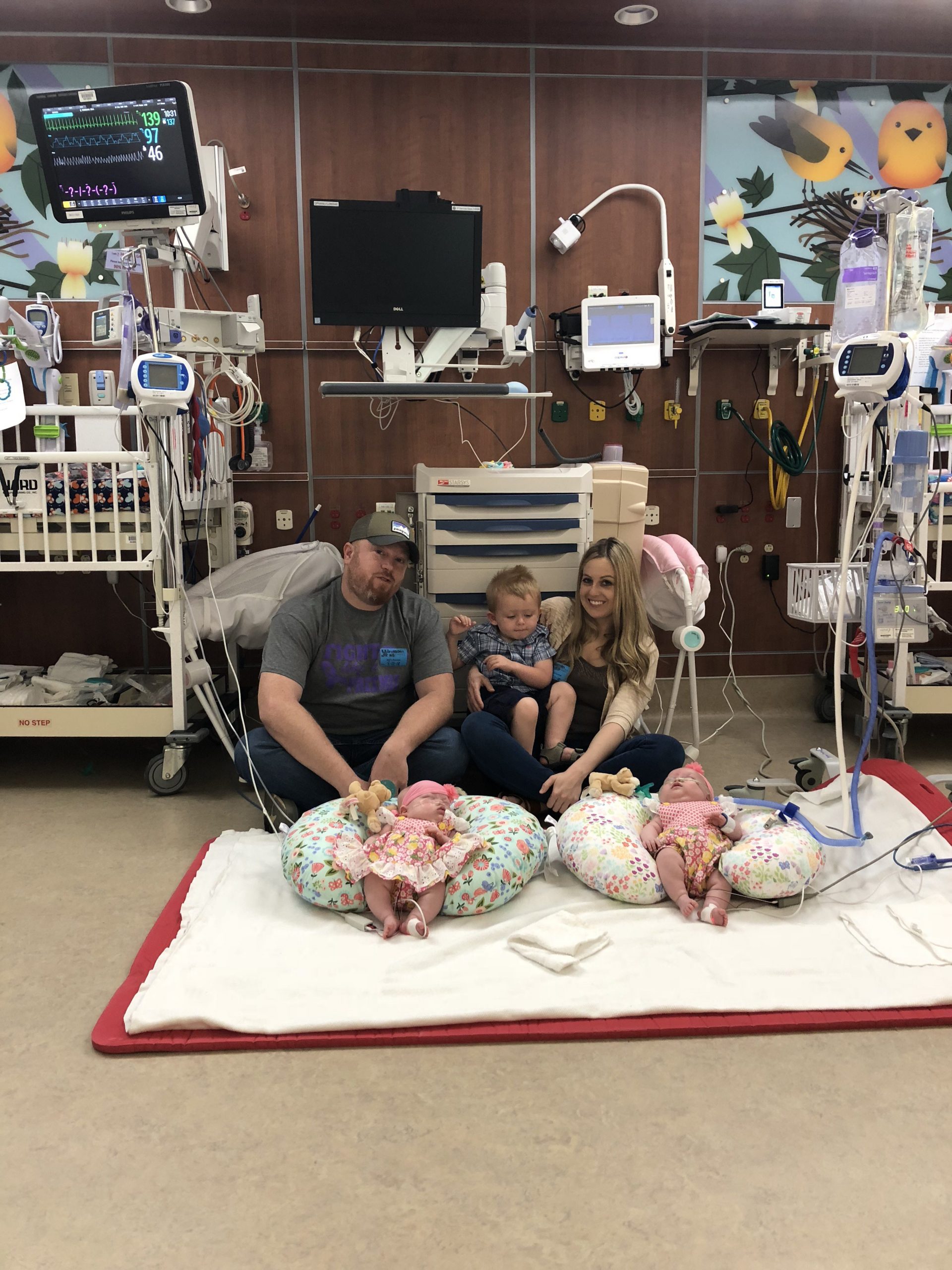 For Candice Greene Bridgeman, the delivery of her twin daughters, Micah Ann and Miyah Arlene, at twenty-five weeks was a miracle. The story of their journeys in life thus far has been just as miraculous.
Candice’s husband, David, agrees.
“We’ve made it this far with the girls because of an unbroken chain of miracles,” David remarked as he cradled one of his tiny daughters in his arms. “There were so many times when there was a problem for the girls, and then, miraculously, the problem would just disappear. Everything came together for them and us through an unbroken chain of miracles.”
As one in a set of triplets, Candice wasn’t initially daunted by the thought of having twins. However, with the early knowledge that her babies had been identified as mono mono twins, a rare type of twin occurring when the egg separates after the placenta is formed resulting in a lack of barrier between the two embryos, Candice realized her babies had only a 50% chance of survival in womb. Statistically, the mono mono twin rarity occurs only once per every 55,000.
“We actually thought we were having Siamese (conjoined) twins at one point,” David noted. “Had that been the case, we knew we would just have to take them and love them.”
Candice was admitted to the hospital at twenty-four weeks as is standard practice for those carrying mono mono twins. Early hospital admission is necessary so the unborn twins can be constantly monitored. It was during the first week of monitoring that the first of many of the family’s miracles occurred.
“Dr. John Barton, who delivered the girls, just happened to be in the room at a moment when the girls were being monitored,” Candice recalled. “He saw Micah’s heart rate plummet, and it wasn’t coming back up. The umbilical cords had entangled to a degree that everything could have been cut off. Micah was basically dying.”
Dr. Barton immediately ordered an emergency delivery.
“I was in the hospital at Central Baptist in Lexington, on a table, hooked up and alone,” Candice shared. “My family was two hours away because David had to be home to take of our son, Christian, and work to support us. Everything happened so fast. It was scary.”
Happily, the delivery was successful with Micah weighing in at one pound, eleven ounces and Miyah at one pound, seven ounces. Both were eleven and one half inches long.
“They weren’t even as long as a ruler,” Candice noted.
The babies were automatically hooked to ventilators and transported from Central Baptist to the neonatal intensive care unit (NICU) at University of Kentucky.
“Because of the type of C-section they had to do, I couldn’t see my babies for three days,” Candice recalled. “It was hard. David went back and forth between me and them and let me know how they were doing, and I constantly phoned the NICU to check on them. Even after I finally got to see them, I couldn’t hold them in my arms for twenty-eight days. It was really difficult.”
Both girls were born with holes in their hearts, brain bleeds, and pulmonary valve stenosis. However, the chain of miracles continued as holes in hearts healed, brain bleeds resolved, and expected heart surgery was deemed unnecessary.
Both girls were on ventilators for three months, and both will probably always have chronic lung disease. Micah was taken off oxygen at a year old, and Miyah can now go briefly without oxygen. Miyah, who is a little less strong than Micah, will most likely need eye surgery in the future because of the loss of her peripheral vision. Both will have feeding tubes in their tummies until approximately two years of age.
Miyah and Micah remained in the hospital for six months. Candice and David were blessed by friends from McCreary County who have an apartment in Lexington. The couple allowed them to use the apartment, rent free, during the hospitalization.
“It was such a blessing and so kind of them to reach out to us,” Candice said gratefully. “We are very appreciative of their help.”
Eight months passed before Candice and the babies finally reunited with David and Christian as a total family unit in their McCreary County home.
“As much as I wanted to be home, I broke down when the time came to leave Lexington,” Candice shared. “I just didn’t think I could do it. The nurses were like family and told us what to expect when we arrived home. They trained us and encouraged us. They told me I could do it!”
At home, with support from relatives and friends, the family learned to handle the twin’s oxygen therapy and other medical needs.
Prayer and faith are credited for getting them through hard times-particularly when Miyah went into repiratory failure just two months after being home in McCreary County.
“She was on a ventilator for twenty days and medically paralyzed to keep her still,” Candice explained. “She didn’t move-not even to blink. It was scary. The doctors were getting a team together to perform a procedure to oxygenate her blood. We prayed all night, and she was spared that procedure. It was just another miracle.”
Today, at thirteen months old, Micah and Miyah are still very tiny but doing well. They only have two scheduled therapies per week-feeding and physical. Both are alert, active, and determined to keep Mom, Dad, and their three year old big brother, Christian, on their toes.
“I’m amazed so many people have followed our journey with the twins,” Candice said. “So many churches and people here in McCreary County prayed for us. People I don’t even know ask about them. I’ve learned a lot about people who are there for you when you go through tough times. I’m so thankful to live in a community where people stop what they are doing to pray for you. I know God heard the prayers of those special people, and He answered those prayers.”

“I feel like God made us stronger through this,” Candice continued as she rocked one of her tiny babies in her arms. “This experience taught me to truly trust in God and His plan. It seemed like bad news came almost constantly. It was very depressing. No matter how many times I heard bad news, I cried out to Jesus, and I felt His peace wash over me. I knew I had to be strong for those tiny one pound girls. Doctors are great, but they don’t know everything. The doctors told us the girls might not make it, but we weren’t going to give up faith. Now, the girls are here with us today. I love telling their story because they really are just tiny miracles.”