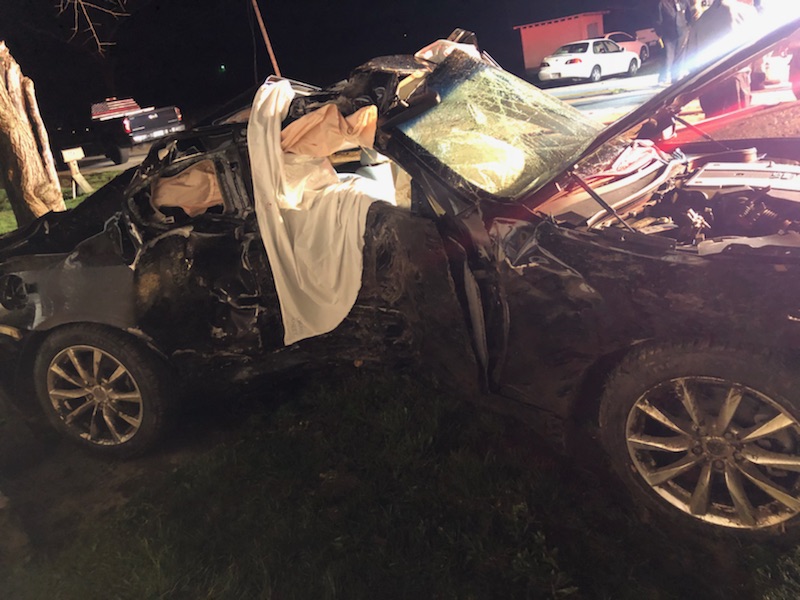 Photo courtesy MCSO
Two men died early Monday morning after this vehicle left the roadway and struck a tree. The McCreary County Sheriff’s Department is conducting the investigation in to the accident.

McCreary County Sheriff Randy Waters reports Deputy Dustin Ridner is conducting the investigation after the two men died after crashing a vehicle in to a tree at approximately 2:04 a.m.

According to the accident report filed by Deputy Ridner the vehicle, a 2011 Infinity Coupe, was traveling at a high rate of speed eastbound on KY92 when it apparently left the right side of the roadway after rounding a curve –traveling for approximately 59 feet. The driver may have tried to correct the path of the vehicle, but the action caused it to cross to the other side of the road where it drove in to a yard, before striking a tree on the passenger’s side.

The passenger, identified as Douglas Strunk, 65, of Stearns, was pronounced dead at the scene by McCreary County Coroner Tim Corder. The driver, Richard Stephens, 51, of Richmond, was being prepped by McCreary County EMS for an air-medical evacuation, but developed complications and was instead transported to the Big South Fork Medical Center where he was later pronounced dead as well.

Speed and alcohol are considered to be factors in the crash.

Deputy Ridner is continuing the investigation.