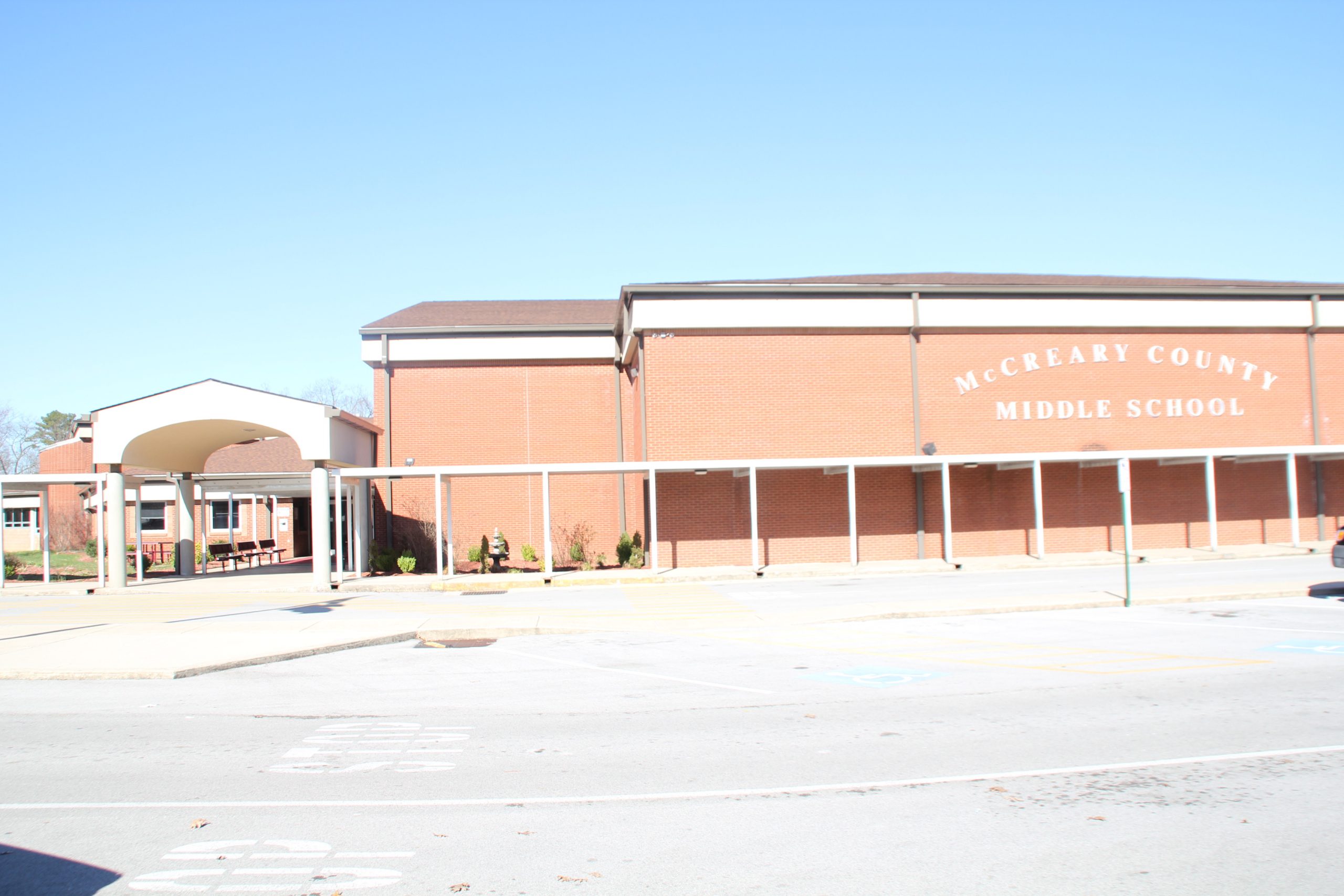 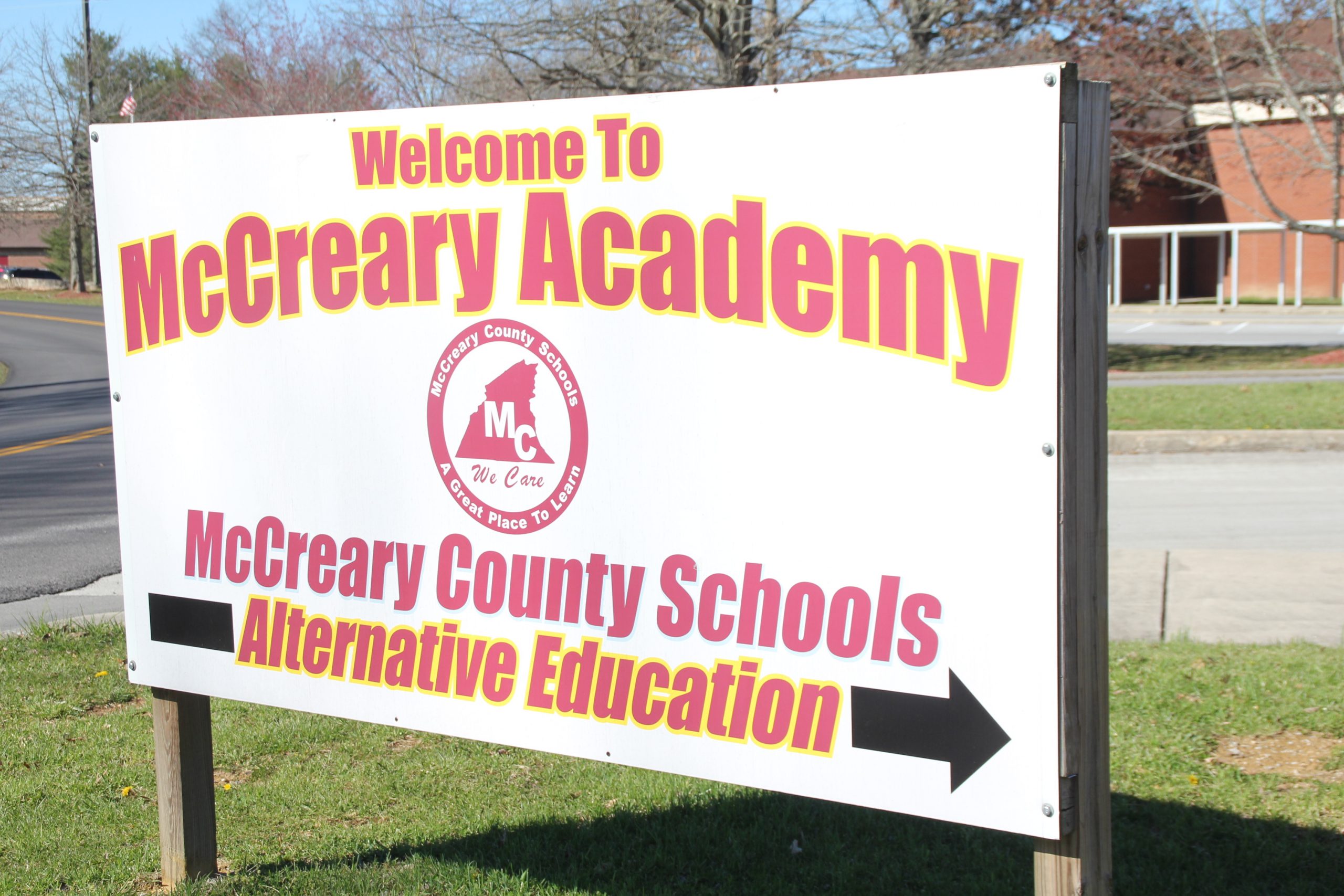 Photo by Greg Bird
Starting next school year McCreary Middle will expand by adding 6th Grade to the school, while the majority of Academy students will be housed at the High School.

With a 5-0 vote the McCreary County Board of Education approved a restructuring plan that would move 6th Grade students permanently to McCreary County Middle School starting next year – a move that would open up more classroom space for pre-school students in the District.
In their regular monthly meeting Monday, the Board heard discussion from principals at all five county schools concerning the possibility of moving all 6th grade classes to the middle school – starting next school year – thus opening up classroom space at the two elementary schools. The additional space would be utilized to expand the pre-school program, allowing more McCreary County four-year-olds to attend school and get a jump-start on their education.
Each of the Principals agreed that such a move would benefit the District overall, and supported the idea of restructuring.
The plan will have impact on every school in the county as space will have to be allocated for new students everywhere.
To accommodate the additional 190 to 200 students next year, McCreary Middle School Principal Todd Waters said the majority of McCreary Academy students (currently housed in the basement of the middle school) would move to the high school.
It would also align the middle school to a traditional format – housing 6th through 8th grades together, allowing for better alignment of education and extra curricular activities for 6th grade students.
Waters said he has already made adjustments to the floor plan of the school, as well as creating a new class schedule for next year in preparation for the move.
“It will fit pretty easily,” Waters said. “We will be a little snug, but I think it is a great thing.” Waters added the extra pre-school capacity will be a benefit for all schools in the District as more children will be able to start school early, which should help improve test scores overall.
Skip Jones and Rebecca Blakley, Principals at Whitley City Elementary and Pine Knot Elementary respectively, both said their schools would be able to accommodate additional pre-school classrooms, meaning that every four-year-old should be able to get in to pre-school. Due to limited space in the past, some four-year-olds were not able to attend pre-school.
Both elementary schools would add one to two additional pre-school classrooms, with the possibility of more if the need arises. Blakley said last year there were about 40 students on the waiting list for pre-school, so the additional rooms should be sufficient for the coming year to accommodate all students who wish to go to pre-school.
High School aged students in the McCreary Academy would move to the High School, with the Middle School keeping one classroom for Academy students at that school. Principal Sunshine Canada said there are about 10 middle school-aged students in the Academy at this point, compared to about 50 high schoolers.
The High School Academy students will be housed adjacent to the Freshman Academy at McCreary Central, in a self contained wing – allowing the classes to be segregated when needed.
MCHS Principal Sharon Privett said moving the Academy to the High School will allow for better integration of students who are working on credit recovery in to the school, allowing them to take additional coursework, such as ROTC, career and technical classes. Behavioral students will also be able to be kept separate from the regular population.
Privett did express the potential need for an additional School Resource Officer to work primarily with the Academy. The Board asked District Finance personnel to see if the budget could support hiring a sixth officer.

Board member Debbie Gibson stated she was against the idea of moving the Academy at first, but after speaking with Privett and Canada, she was convinced the move would be in the best interest of the students and supported the reorganization.
The potential realignment of grade levels was a significant factor in the School District’s attempt to levy an additional “nickel tax” in McCreary County in 2017.
Under the District’s 5-year facility plan three major projects were listed as priorities: repairing the roofs at McCreary Central High School and Pine Knot Elementary School, as well as the construction of a new wing at McCreary Middle.
The new wing was planned to accommodate additional classroom space, thus allowing for room to house sixth-grade at the school.
With the roof repair projects in the process of being started at both schools, the middle school construction remains as the top priority for the District.
District finance personnel reported Monday night it would be about five years before the District has the bonding potential to begin such a large-scale project. Until a new wing is built all principals agreed space would be “tight” in all schools, but they all agreed it would be possible to manage until the new building is completed.

In other Board actions Monday: Board Chairman Dustin Stephens appointed Lori Foster to be the Board’s representative on the screening committee when it meets next month.
Applications for the vacant Superintendent position are still being accepted by the Kentucky School Boards Association until April 6. Once all applications are in, the screening committee will meet on April 15 to begin the process of reviewing all applicants to forward their recommendations to the Board for final review.

The next regular scheduled meeting of the McCreary County Board of Education will be on Monday April 22 at 6:30 p.m.