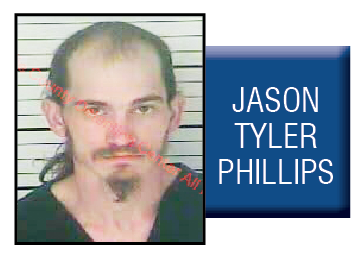 A Wayne County man has been arrested in connection with the Saturday night murder of Jason K. Dishman, 36, at a residence in Stearns.

According to the Kentucky State Police, Detective Billy Correll, who conducted the investigation, Dishman suffered from gunshot wounds after an apparent confrontation with Jason Tyler Phillips, 28, of Monticello. The victim was transported to the Wayne County Hospital, where he was pronounced dead that same evening.
After the investigation identified Phillips as a suspect in the case, he was arrested without incident Sunday evening and officially charged with murder in the case.
Phillips and Dishman apparently were both at a McCreary County residence on West Highway 92 around 7:00 p.m. Saturday night when the shooting occurred. According to the arrest warrant the two men were alone outside of the home when a witness reportedly heard approximately three shots ring out. The witness further stated they had observed Dishman running away from the area where the two were originally standing when he was shot. It remains unclear if Dishman was shot prior to being seen running, and forensic testing is being conducted on evidence collected at the scene.
The State Police has not released a possible motive for the shooting as of press time.
Phillips left the scene on foot before law enforcement officers arrived, but left his vehicle at the scene. A search warrant was obtained for the car where investigators found one spent .22 caliber shell casing, an empty .22 caliber ammunition package and one bullet.
Phillips was lodged in the Leslie County Detention Center