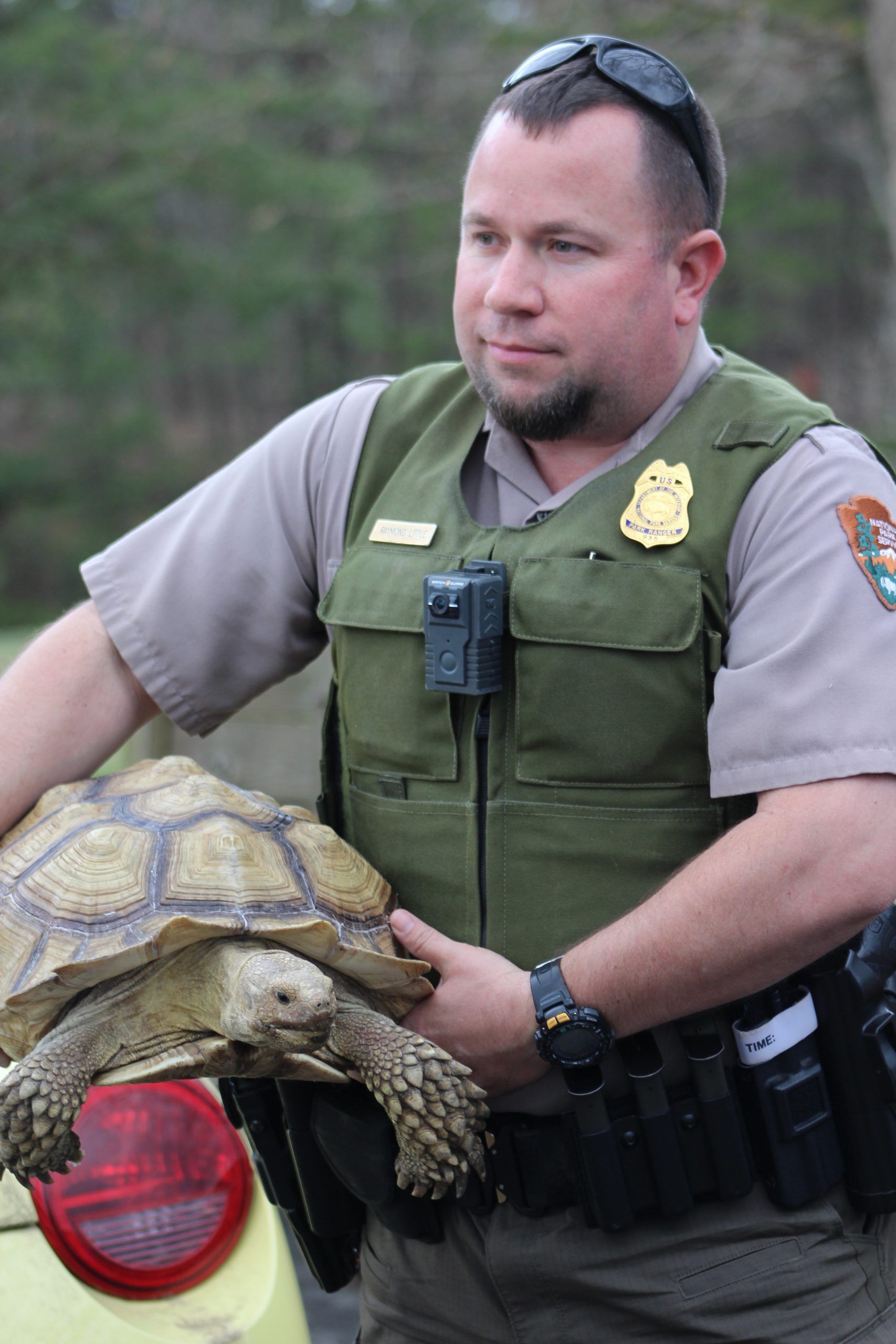 It’s not every day that the average homeowner in downtown Stearns discovers an African native munching on dandelions in his/her front yard, but that’s exactly what happened earlier this week when Mary Singleton discovered a runaway African spurred thigh (sulcata) tortoise on her front lawn.
Flabbergasted upon discovering a tortoise more than twice the length of her size eight, sneakered foot, Mary watched as the hungry reptile crawled around the yard plucking grass, wild violets, and ravenously devouring yellow dandelion blooms. In addition to grass, violets, and dandelions, the tortoise enjoyed chomping on some raw cabbage given to him by Mary.
Hoping to keep the tortoise safe, Mary contacted Raymond Little, U.S. Park Ranger/Federal Law Enforcement officer for the Big South Fork River and Recreation Area. Officer Little quickly arrived and identified the tortoise as an African spurred thigh tortoise, capable of reaching a weight of up to 150 pounds and considered the third largest tortoise species in the world.
Officer Little loaded the friendly, male tortoise up in his truck and took it with him for safe-keeping. Later that evening, a picture of the tortoise surfaced on Facebook with a post requesting help in finding a lost, hard-shelled, “pet.”
Eventually, the owner and runaway tortoise were reunited. The owner explained the tortoise had been allowed outside to enjoy the warm, sunny day when it evidently decided to run away in search of greener pastures and more dandelions to eat. Officer Little advised the owner to keep the tortoise in a large, secure enclosure and offered tips about the specialized diet-including calcium supplements-needed by the tortoise in order to thrive and prevent shell deformities from occurring. Officer Little also intends to visit the tortoise occasionally to check on its progress.
Although the species is native of the southern edge of the Sahara desert in Africa, they are sometimes kept as pets due to their typically pleasant disposition. However, keeping African spurred thigh tortoises as pets can be difficult partly because of their size. They require large enclosures, temperatures above 60 degrees, bedding composed of grasses or grass-based hay, and have very specific diet requirements. 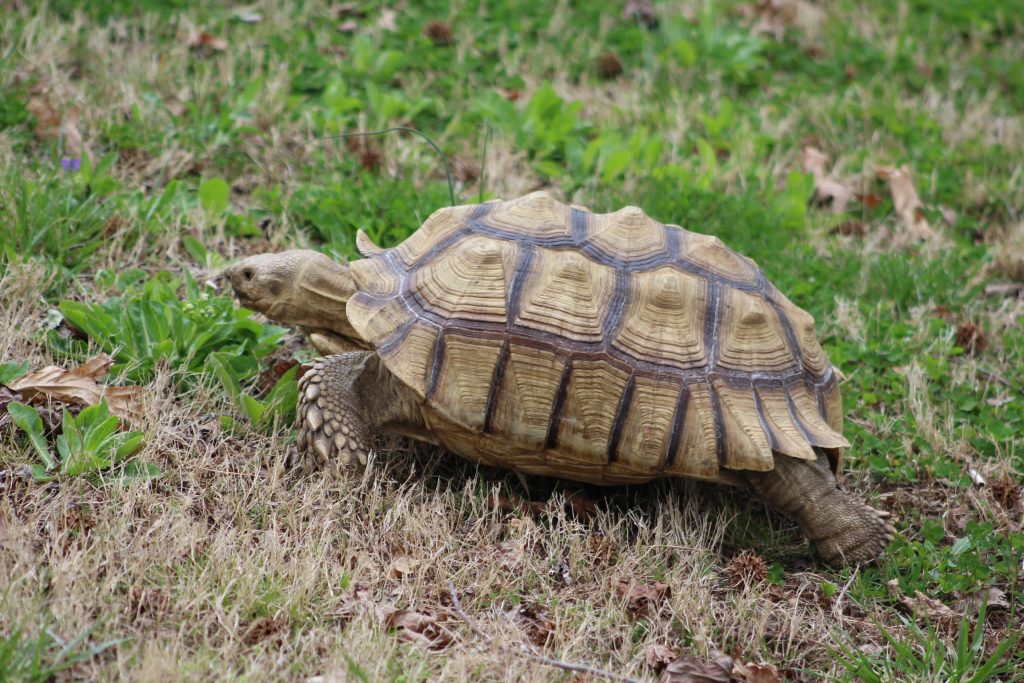 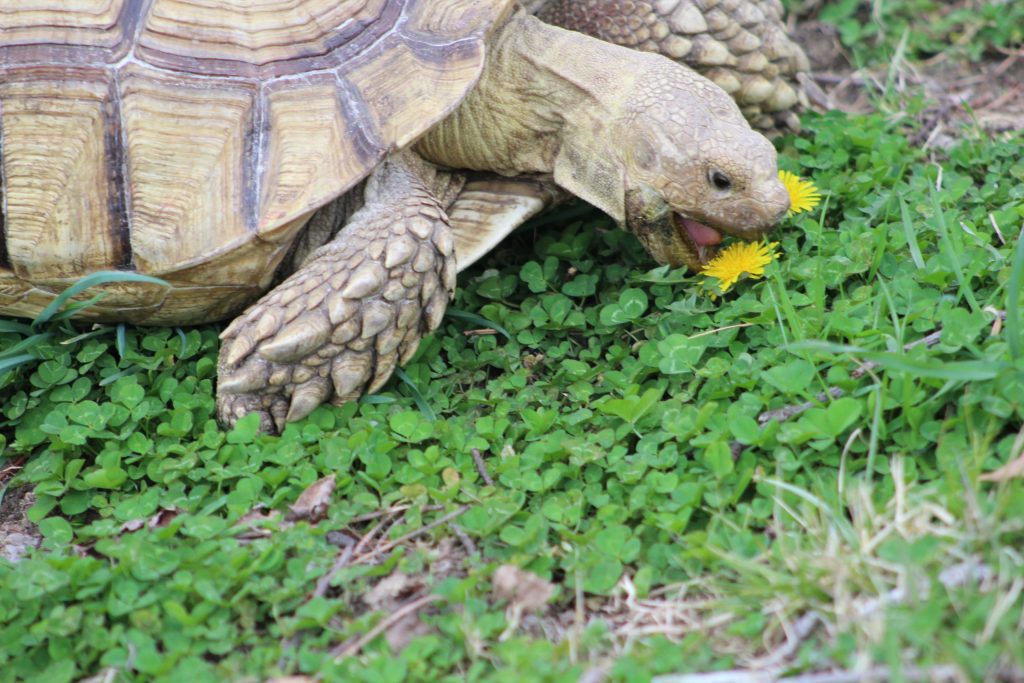 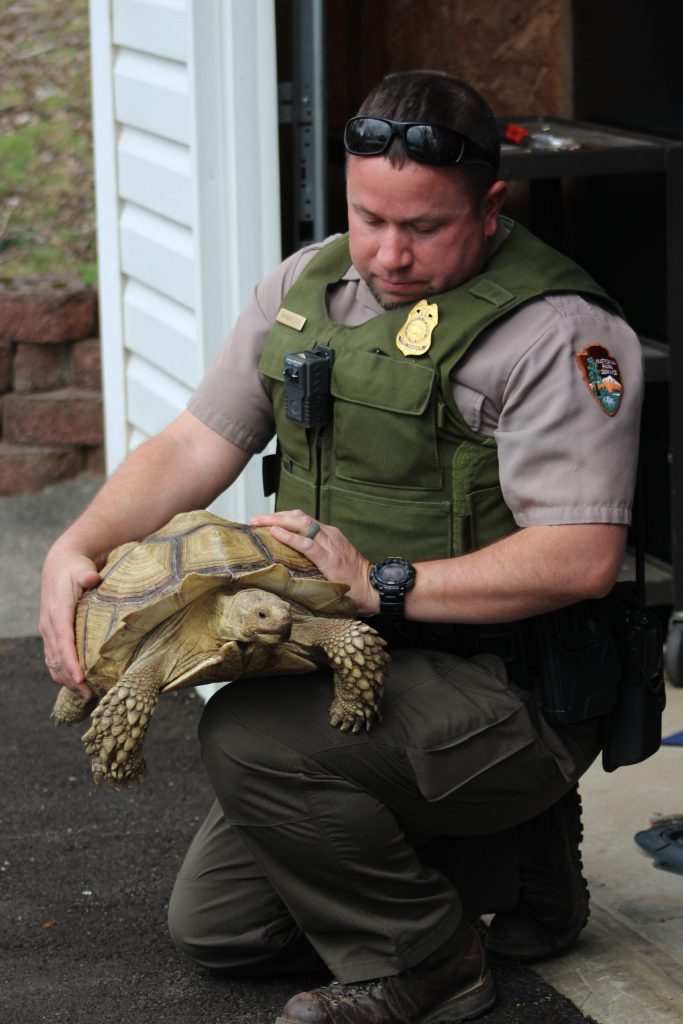 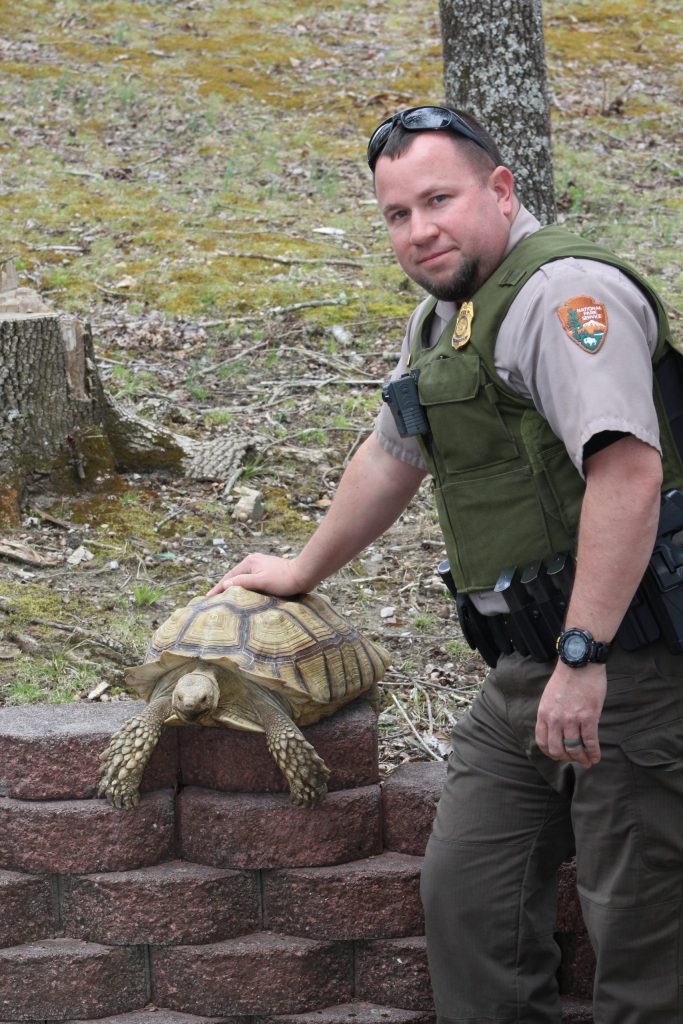 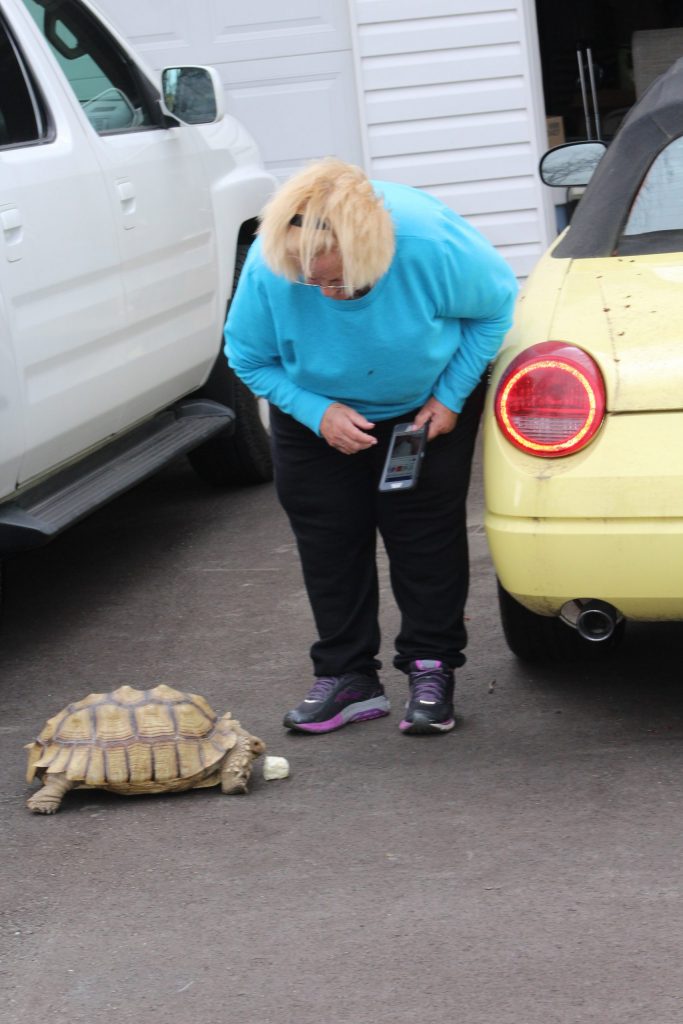 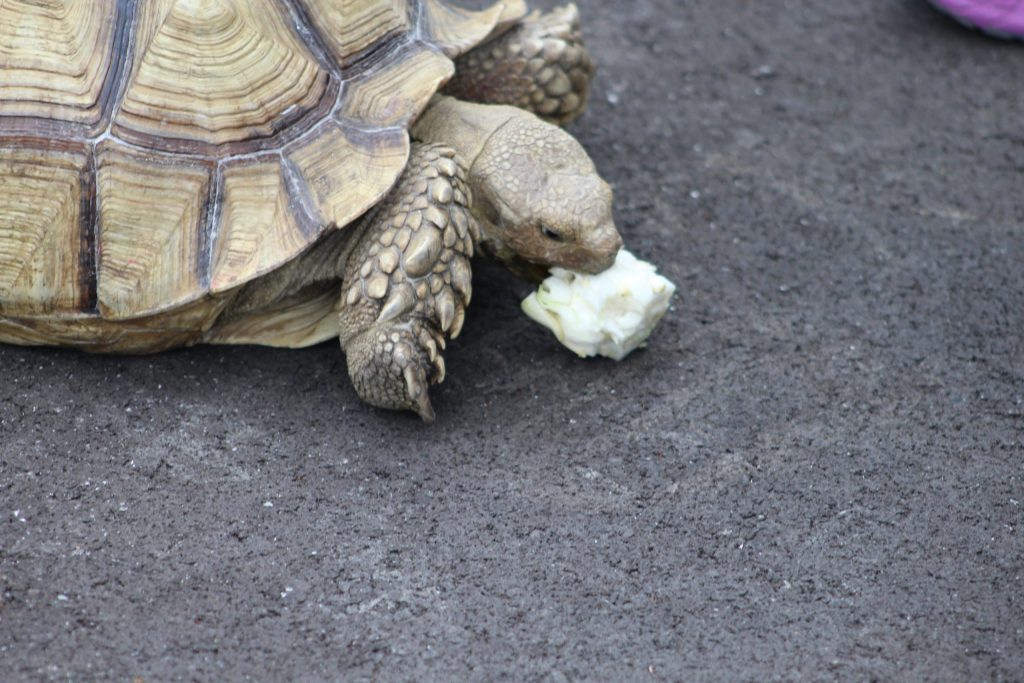 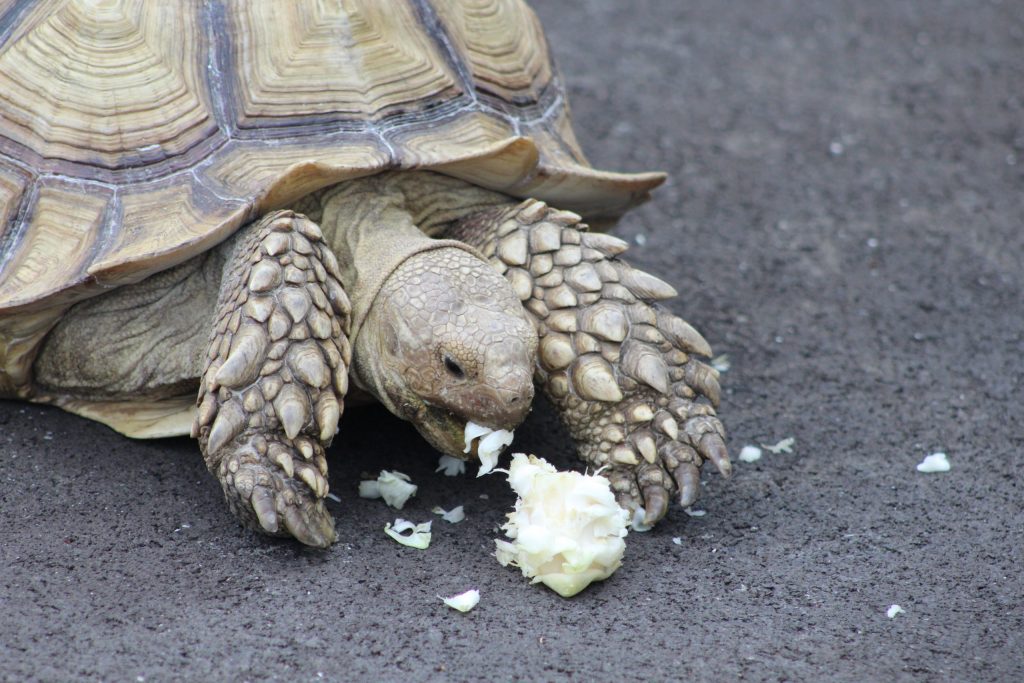 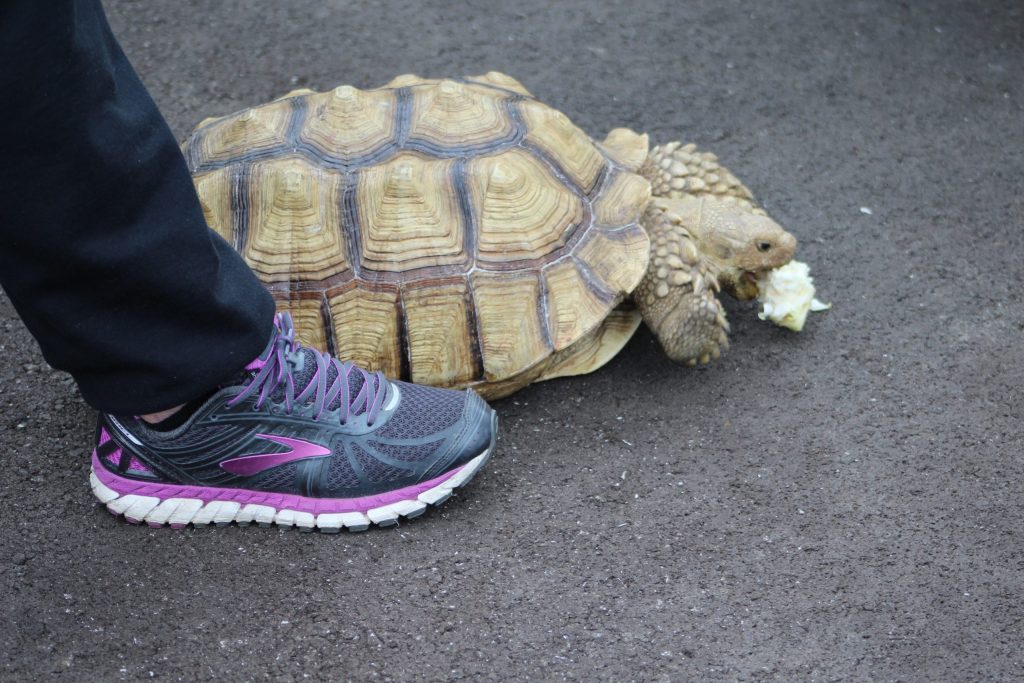