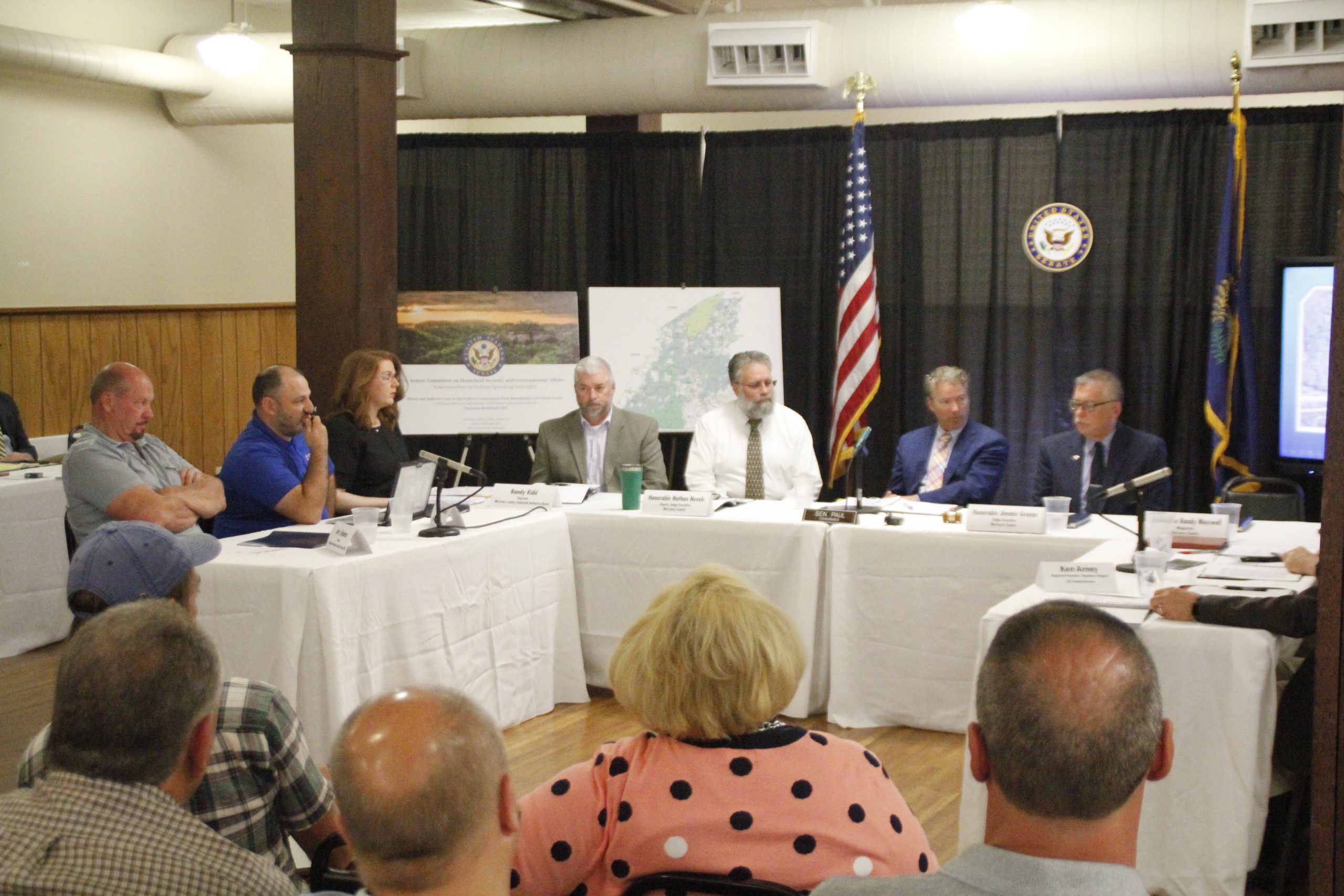 Photo by Greg Bird
Kentucky Senator Rand Paul met with local leaders as well as representatives from the Forest Service and Park Service to try and find ways to work together.

United States Senator Rand Paul called for better communication between local and federal governments during a field hearing last Thursday in hopes of helping McCreary County get better access to the thousands of acres of federally owned land in the county.
The hearing, attended by local government and business leaders, as well as representatives from the United States Forest Service and Park Service, held at the Stearns Heritage Hall, had the stated purpose of bringing the federal agencies and local government closer together to find ways for more cooperation in providing local residents access to the forest and park lands.
Forest Service Director Ken Arney and National Park Service Southern Regional Director Robert Vogel were invited to the hearing to listen to concerns and complaints, as well as offer their input on possible solutions.
The Senator criticized the federal agencies for a lack of opaqueness when working with local agencies regarding road closures and land access to the National Forest and Park Service.
“What can we do better?” Senator Paul asked. “Some of this stuff is really simple and I can not understand why it can not be fixed.”
“We work for you,” he said of the American people. “If nobody can use it, is it of value?”
Noting he has received complaints of blocking road access Paul said that when his office contacted Forest Service staff about finding out how to request access, they were told they would have to submit an open records request – something that did not sit well with the Senator.
“That to me is an insult,” he said. “That is not the way government should work.” 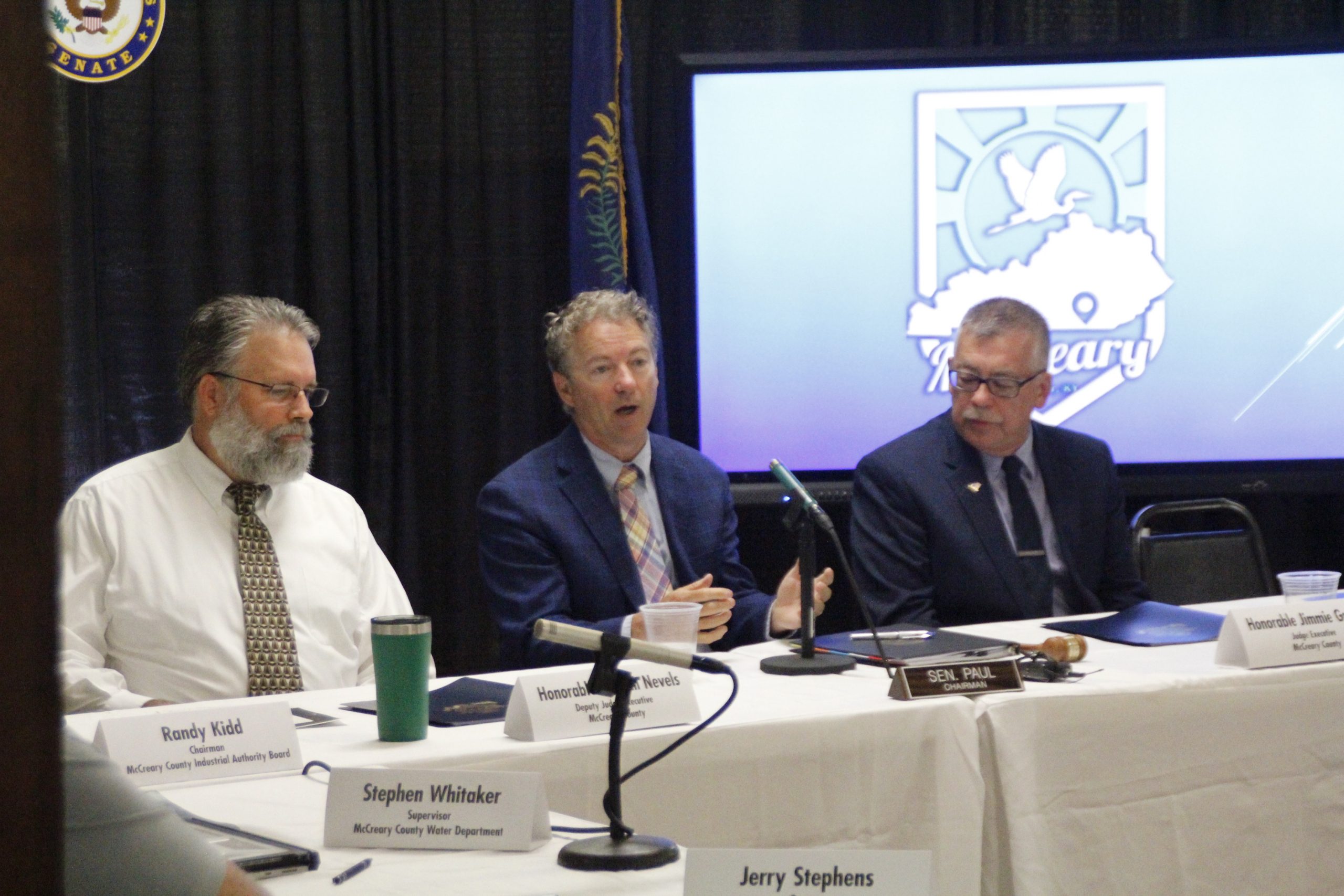 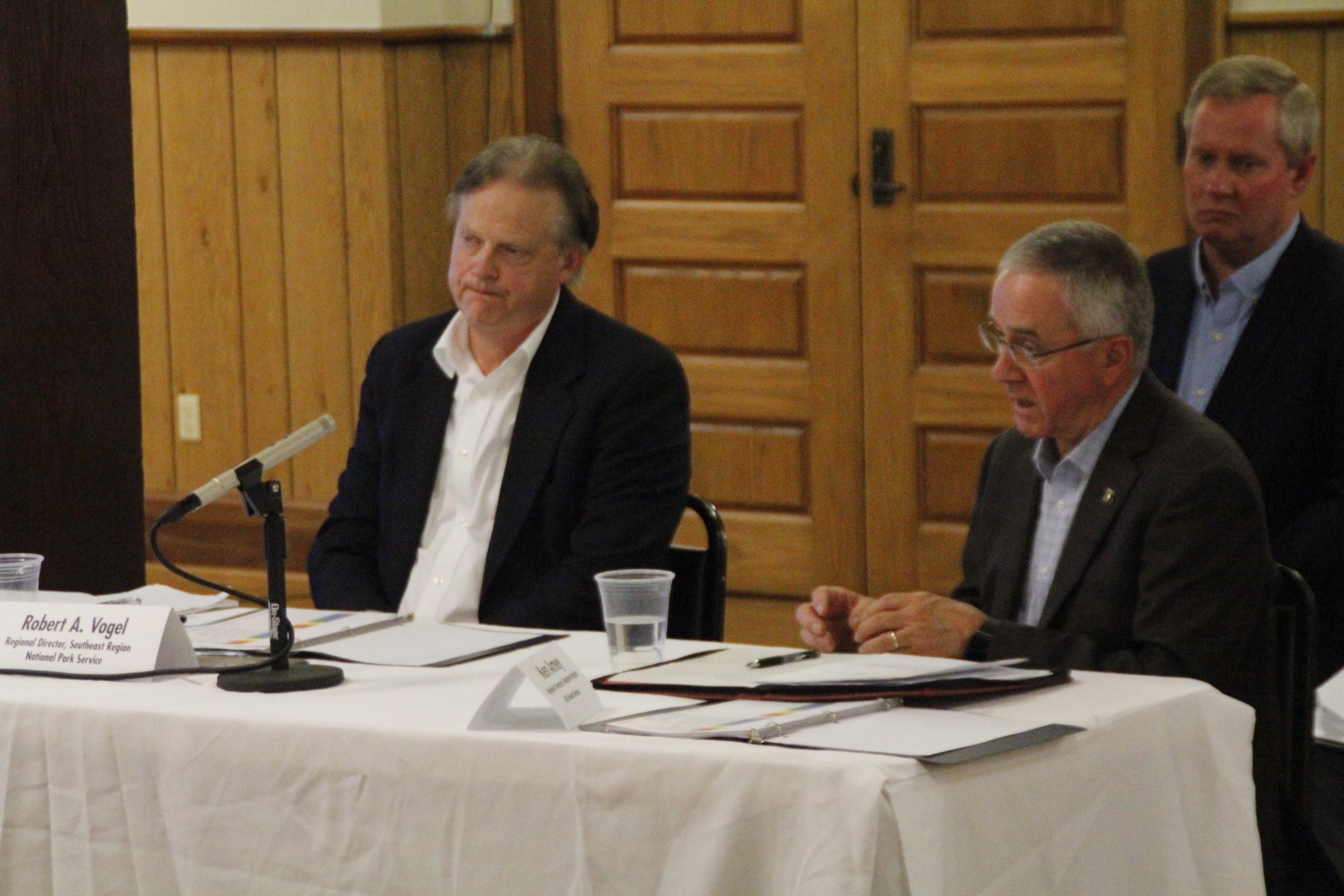 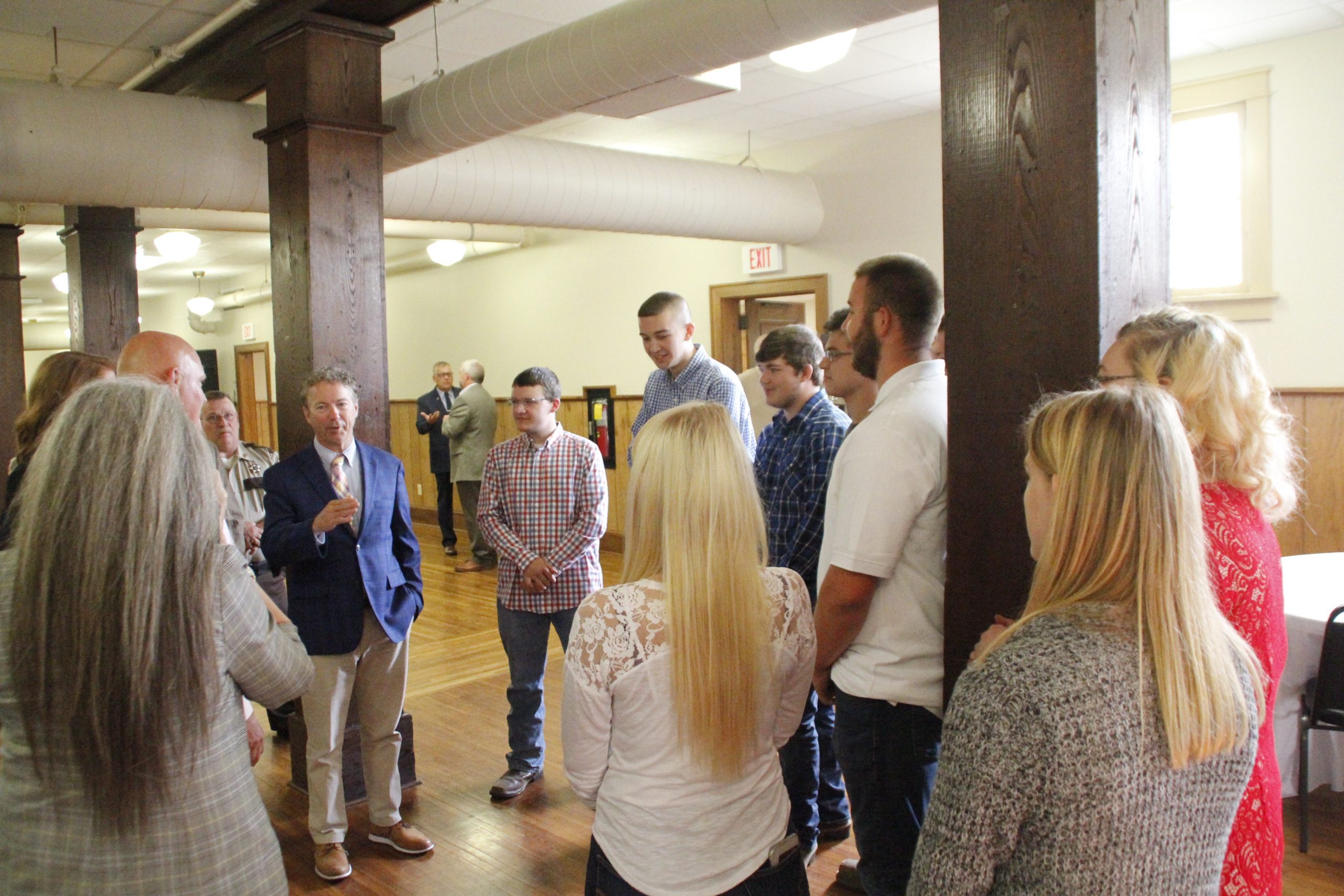 Judge Executive Jimmie “Bevo” Green testified that the county’s budget is “handcuffed” with over two thirds of all land in the county owned by the federal government and only pennies on the dollar being paid in payments in lieu of taxes.
If McCreary County were to be granted better access to use the land, either by commercial development or recreational access to the National Park, Greene argued, it would go a long way toward rebuilding the local economy.
When the Big South Fork Park was established in the 1970’s there were promises of opportunities for the county Greene said. But those opportunities were mainly to be found south of the border. 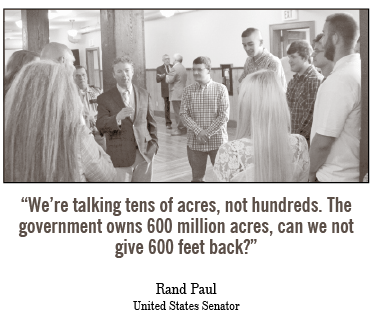 “For whatever reason most everything went to Tennessee,” he said. “We would like to be offered a fair share of what Tennessee and other areas have.”
Deputy Judge Nathan Nevels pointed out 82.5 percent of land in McCreary County is controlled by the federal government, leaving only about 47,000 acres available for private development – with a lot of the available land in hard to reach or difficult to develop terrain.
Nevels requested the Forest Service work with the county to open up some small parcels of land along northern U.S. 27 and Highway 90 to allow for commercial development.
Paul said his recent attempt to introduce an amendment to a land use bill forcing such a move was criticized by special interest groups for getting rid of protected land, but emphasized the land area was only a small fraction of the forest.
“We’re talking tens of acres, not hundreds,” he said. “The government owns 600 million acres, can we not give 600 feet back?”
“We can’t think of things as they’ve always been done, we have to think about doing something different.”
The Senator asked , if there was a process to either sell, lease or exchange Forest Service land to citizens.
Arney stated there are ways to go about opening land, and promised to work with county officials to outline the process. He stated an outright sale of the land is an uncommon occurrence, but it is possible. In order to do so, he cautioned, it would require opening the issue to public comment.
He said trade of land is more common, but there also exists the possibility of opening land for a special use permit.
However, Arney was unable to provide an example of such a permit being issued .
“So it is unlikely to happen without changing something,” Senator Paul stated.
Other speakers at the hearing included McCreary County Water District Supervisor Steven Whitaker who spoke about the lack of maintenance of Park Service property in and around Blue Heron as well as the impact of Forest Service prescribed burns has on air and water quality.

McCreary County Industrial Authority Chair Randy Kidd spoke about the possibility of the Park Service granting more access to Park lands in McCreary County, noting the majority of the access is in Tennessee – driving tourists south to take advantage of the amenities outside of the county.
He said, after the park was established in the 1970’s, it felt like locals were not wanted in the park.
“Oppression is what we started to know,” he said.
Kidd stated if McCreary County had better access to the park, it would help the economy and tourism efforts.
Park Service Director Robert Vogel said he would be very happy to work with local leaders to look in to the possibility, and noted the Park Service tries to work with local governments in the development and planning of such endeavors.
He did note that there is a process for doing so, and it would require studies to determine what impacts any development would have on the land.
Local businessman Jerry Stephens spoke about management of the forest, specifically the lack of harvesting timber before it dies and invites disease and harmful insects to the forest.
Stephens estimated McCreary County contains about $300 million worth of timber located on National Forest land, but cutbacks in logging permits has led to more resources going to waste and an overall degradation of the health of the forest.
“(The forest) is dying faster than it is growing,” Stephens said. There is all kinds of timber that is over mature, and very little young timber.”
He recommended the Forest Service look at expanding logging, which would not only remove dead and dying trees – leading to an increased fire risk – but also would stimulate the local economy by reviving an industry that had been strong in the area in the past.
“It makes sense to me,” he said. “There are so many millions of dollars in McCreary County that’s not being used. A healthy forest is economically advantageous and environmentally advantageous.”
Arney admitted that logging was down significantly over the past few decades, but said the Forest Service is looking at the possibility of doing more.
“We are looking at it and we know we need to do more active management than we are currently doing,” he said.
Olivia Immitt, an employee of the Big South Fork, spoke about the natural beauty of McCreary County, but is concerned about making changes to the ecosystem without careful consideration and study. Even small changes could make large impacts on the forest.
Senator Paul closed the hearing by stating he hoped that, with the help of his staff, local leaders and Forest and Park officials will begin a dialog over the next few months and try to develop a working plan. He promised to revisit the issue in about six months, and if an impasse is reached he would look toward changing laws to make it easier.

“I think there is a way for both the environment and economy to do well,” he said. “We can do better.”