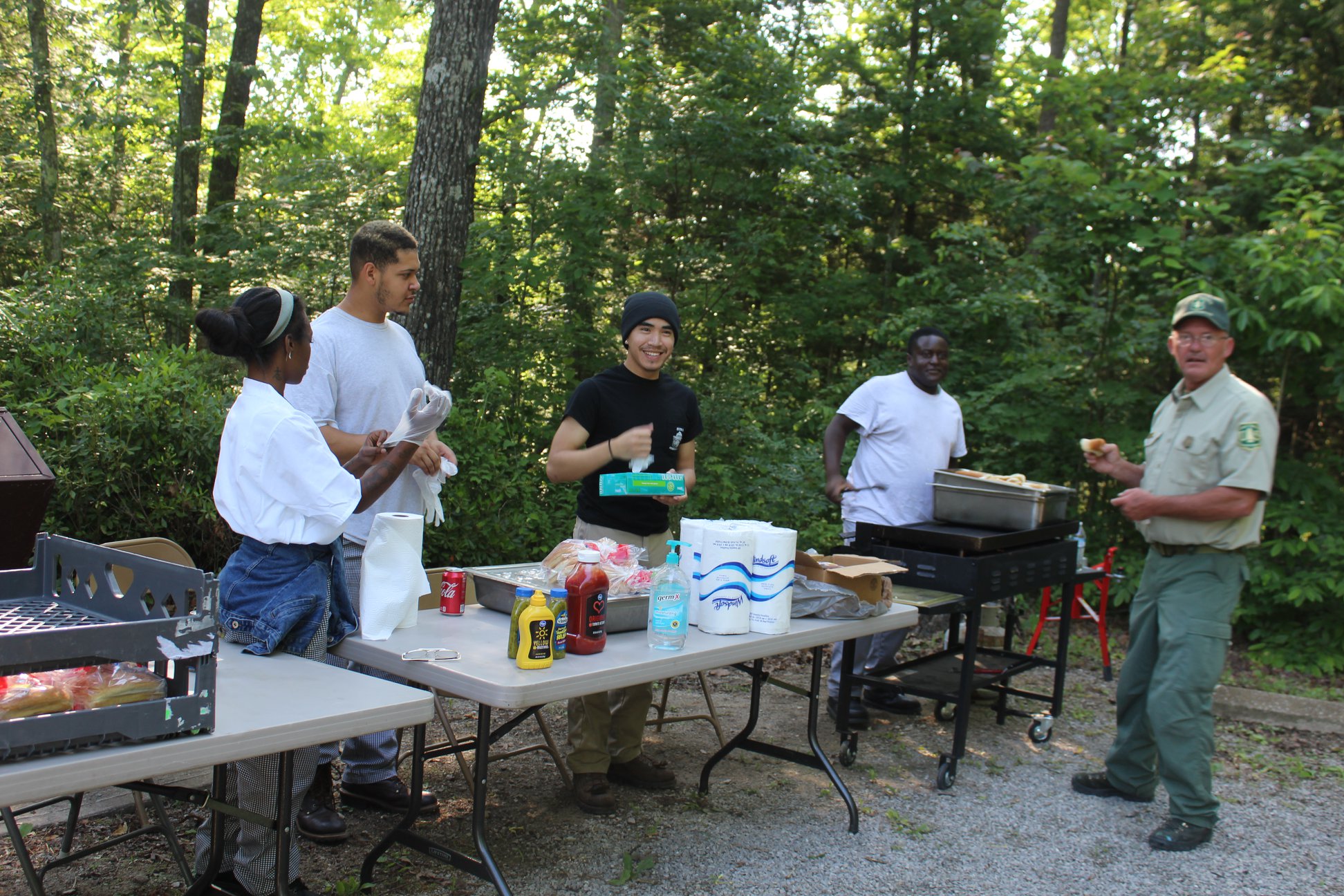 Photo by Eugenia Jones
Pine Knot Job Corps students helped out with the latest kid’s fishing derby. With the news that the centers would not be closing, the staff and students will be able to continue providing service to the local community.

Apparently bowing to congressional pressure the Departments of Labor and Agriculture reversed their controversial decision to close nine Job Corps centers across the United States and privatize 16 others.
The announcement that the centers would be closing came suddenly two weeks ago and spread concern in the communities that house the centers, including McCreary County as the Pine Knot Job Corps were slated to by shuttered by September.
Of 128 Job Corps centers across the United States 25 were operated by the U.S. Forest Service. Those centers were the ones targeted for either closure or to be sold off and privatized.
Many congressional leaders, including Kentucky’s Senator Mitch McConnell and Representative Hal Rogers, expressed shock and dismay over the announcement, questioning the decision and began taking steps to intervene.
A congressional amendment, aimed at stopping the closure had passed the House of Representatives and was set for a vote in the Senate, but last Wednesday’s announcement put an end to the need for the bill.
Congressman Rogers, who had sent letters to USDA Secretary Sonny Perdue and DOL Secretary Alexander Acosta opposing the move, as well as supporting legislative actions to block the closures, issued a statement praising the decision to halt the proposed action.
“From day one, we never received a clear explanation for the abrupt decision to close the Pine Knot Job Corps Civilian Conservation Center,” Rogers said. “I’ve seen, first-hand, the value of these Job Corps CCC employees and the impact that these programs have on the at-risk youth they serve, not to mention, their important work to protect our national forests. I applaud Sec. Perdue for reversing the decision and I look forward to working with this administration to find a sustainable path forward to improve operations and keep these centers open.”
Senator McConnell, who had also contacted both secretaries to urge them to reconsider, announced last Wednesday that he had been informed of the reversal.
“I’m grateful that President Trump and his administration have answered our calls to preserve the Job Corps Civilian Conservation Centers in Kentucky,” said Senator McConnell. “These centers provide critical educational and job-training services to at-risk youth in some of the Commonwealth’s most distressed communities, and I appreciate Secretary Perdue calling me today to inform me of the good news. I am pleased Secretaries Acosta and Perdue have agreed to stop the closure of these centers, and as Senate Majority Leader, I look forward to continuing to work with them to support rural development in Kentucky.”
In addition to the outcry from elected leaders, thousands upon thousands of citizens expressed outrage over the planned move by signing petitions, contacting their legislators and holding rallies.
McCreary County Judge Executive Jimmie Greene II said the reversal was welcome news locally, as the county would face an economic hit from the loss of jobs and services provided by the local center.
“We were just exhilarated when we heard the news,” Greene said. “We are so thankful for our legislators who stepped up to protect the Job Corps. And a big thank you to all the citizens who spoke up; this proved your voice can be heard in Washington.”
There are still questions to the long-term stability of the centers following the latest threat. Montana Senator Jon Tester, whose district also faced a potential closure, stated last week he felt the decision to keep the centers open was short-term, and could become an issue again after the 2020 election.
To potentially forestall that possibility Senator Tester has introduced an amendment to the National Defense Authorization Act that would prevent the closure of any center, unless there is a proven risk of health and safety, through 2025.
Brandon Pfelimeier, Director of the Pine Knot Job Corps Center was unavailable for comment.