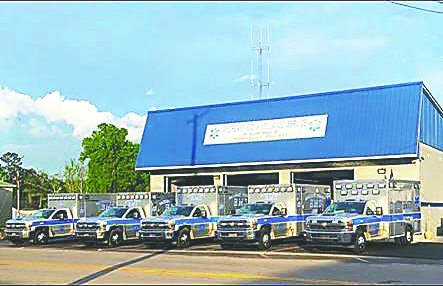 McCreary County Ambulance Service Director Jimmy Barnett announced this week that the McCreary County EMS topped $1.5 million in revenue for the past fiscal year – the highest total in their history.

According to the County Budget, the Ambulance Service’s annual operating budget for the year was about $1.1 million, meaning the service generated an additional $400,000 that was used to fund other County services.
The Ambulance Service is the highest revenue generator for the County, surpassing the Occupational Tax, which generates about $1.1 million for the General Fund (an additional $500,000 is directed to the Jail Fund), and property tax, which accounts for about $328,000 per year.
One of the main reasons for the increased revenue was the introduction of dedicated non-emergency transfer runs about three years ago. In the 2016-17 fiscal year, the first year the transfers began, EMS revenues increased by about $22,000. In 2017-18, the first full year of transfers, grew by about $70,000. The latest year’s totals show an increase of more than $91,000.
McCreary EMS conducted 4,478 total runs over the past 12 months, with 585 being dedicated non-emergency transfer runs.
Since Barnett took over the Director position in 2011, he and his staff have worked hard on modernizing and improving the equipment and fleet. Those improvements have led to the service being highly successful.
His department has benefitted by obtaining more than $1 million in grant funding to purchase equipment such as new lifts, heart monitors and others to put the best and most updated equipment in the ambulance fleet.
“We are providing service to the community essentially without any cost to the taxpayer,” Barnett said. “Any additional revenue we create goes to help fund other county programs.”
“We are very proud of what we accomplished,” he added. “These people work hard and put in long hours. We all work as a team to help make our county better.”
Judge Executive Jimmie Greene II said the County is thankful for the Ambulance Service and what they provide.
“We are very pleased with and proud of Jimmy and the whole crew at EMS,” Greene said. “The leadership and staff are the model of professionalism and set an example for all County departments. We have had other counties that have reached out to