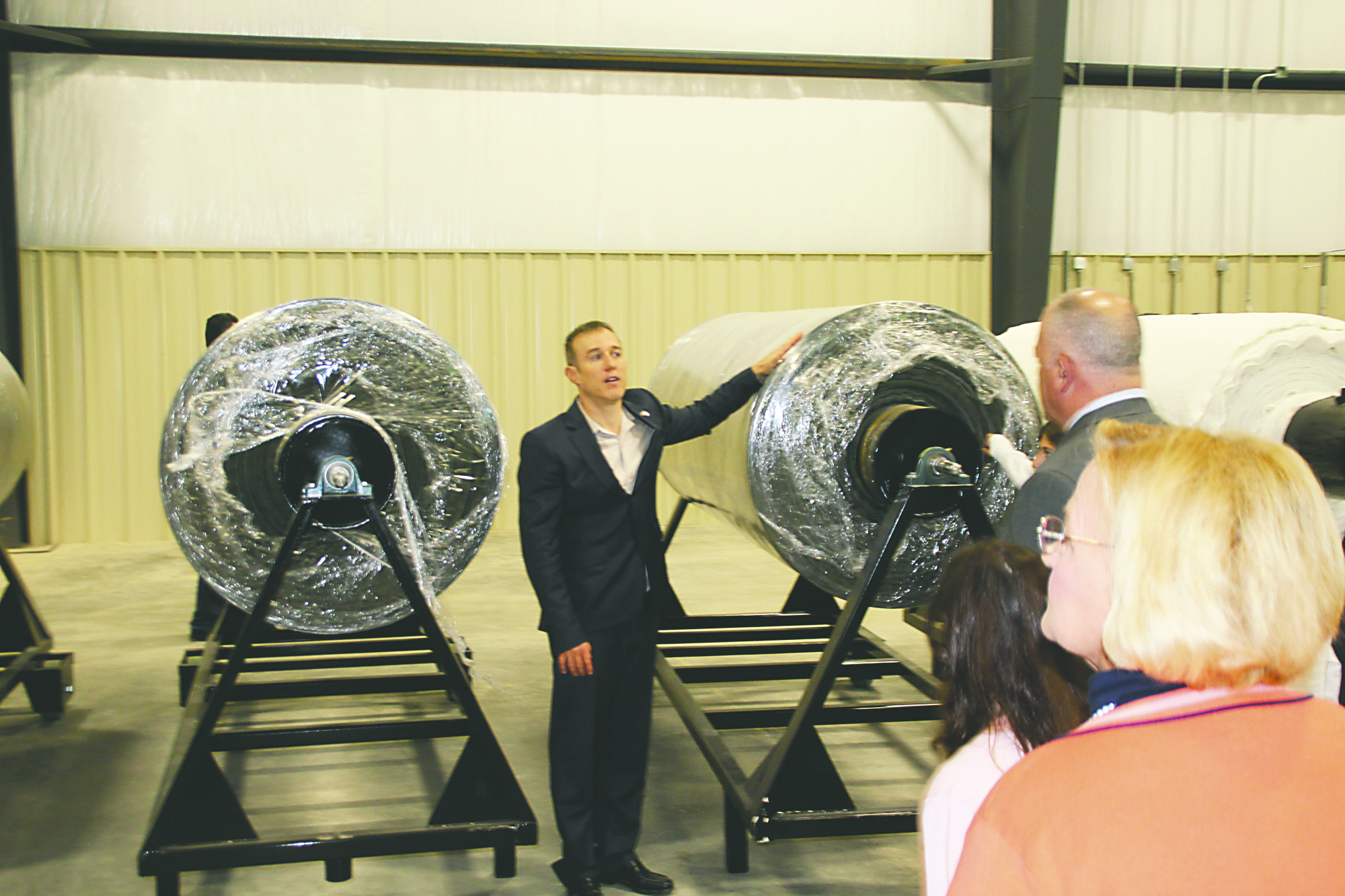 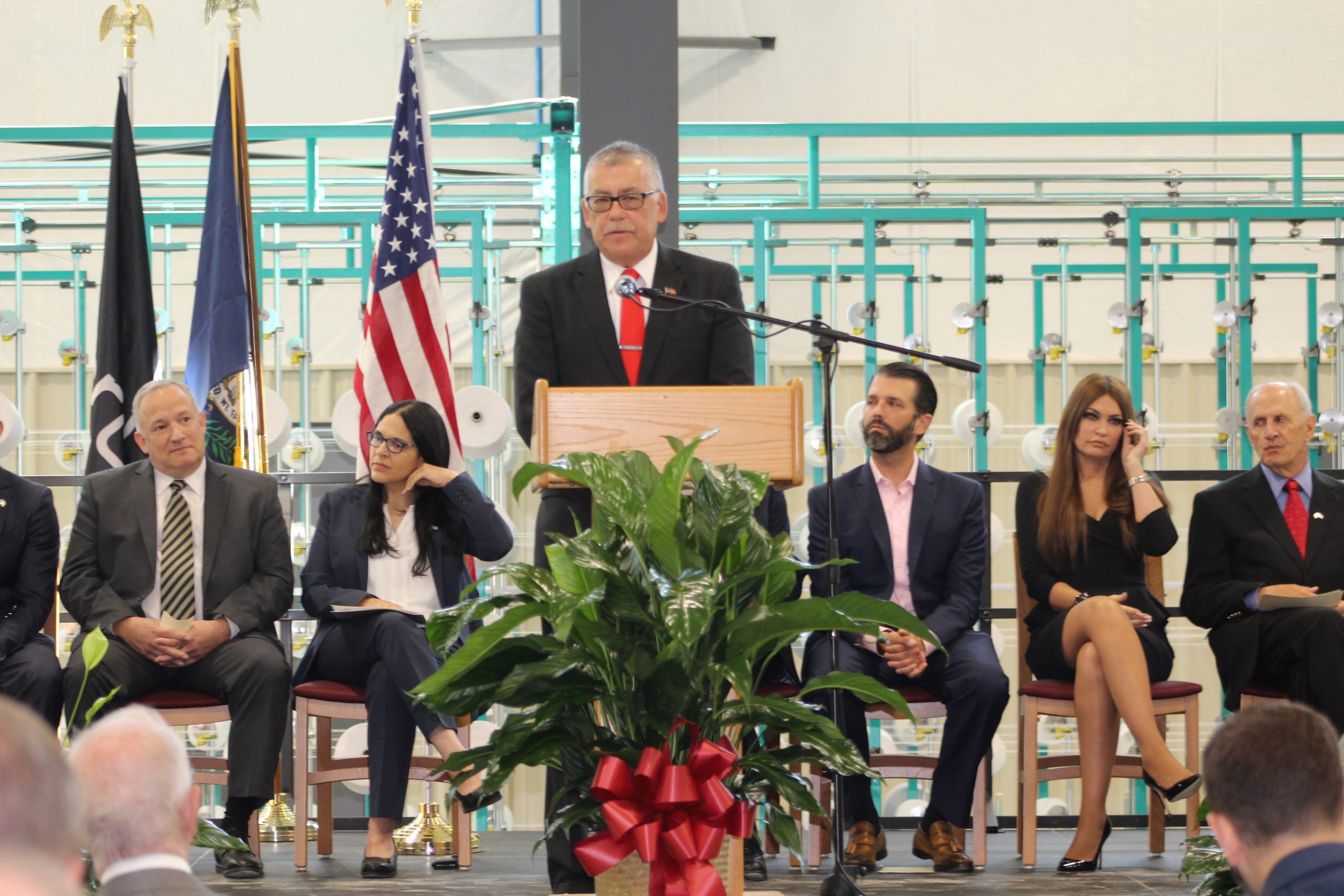 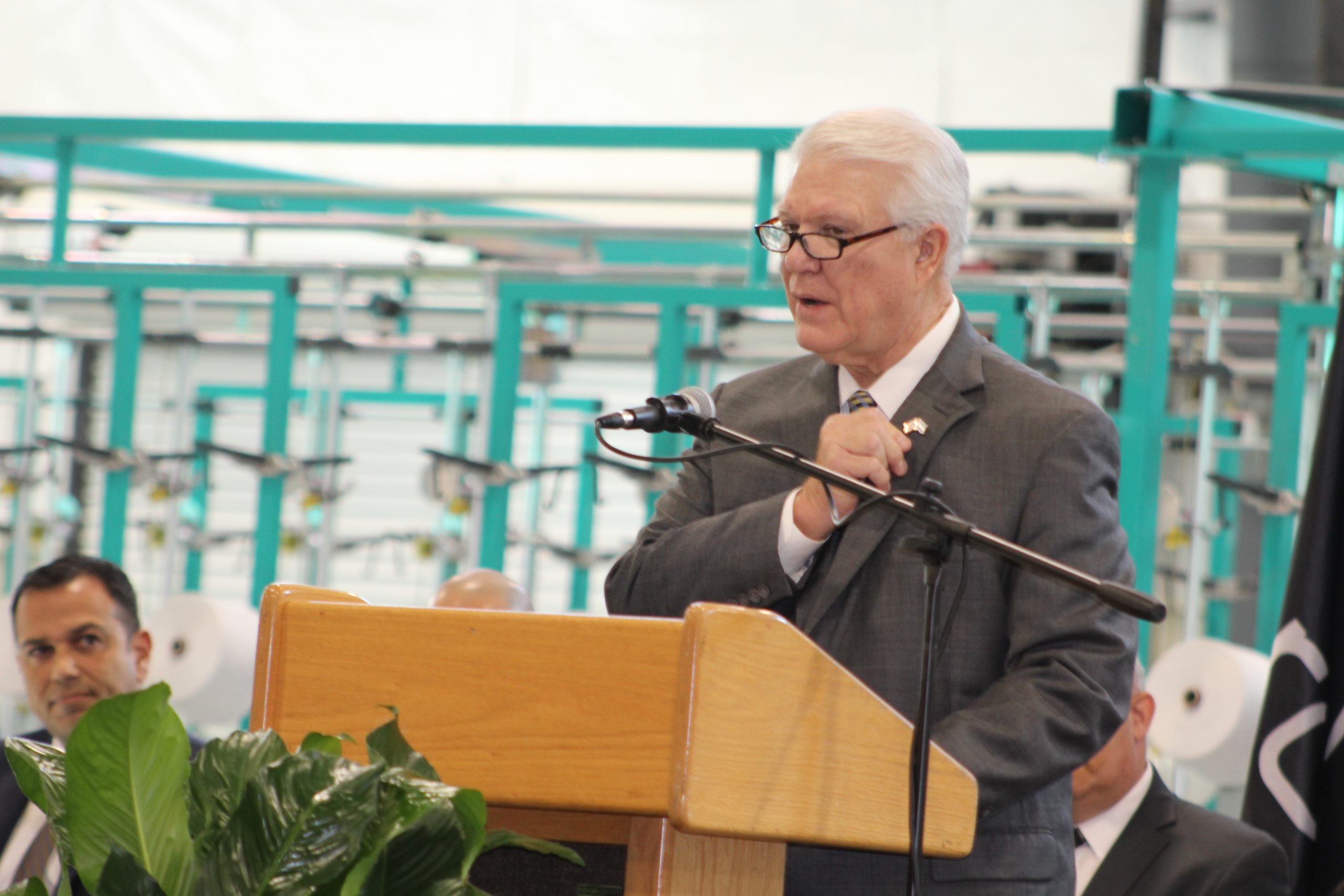 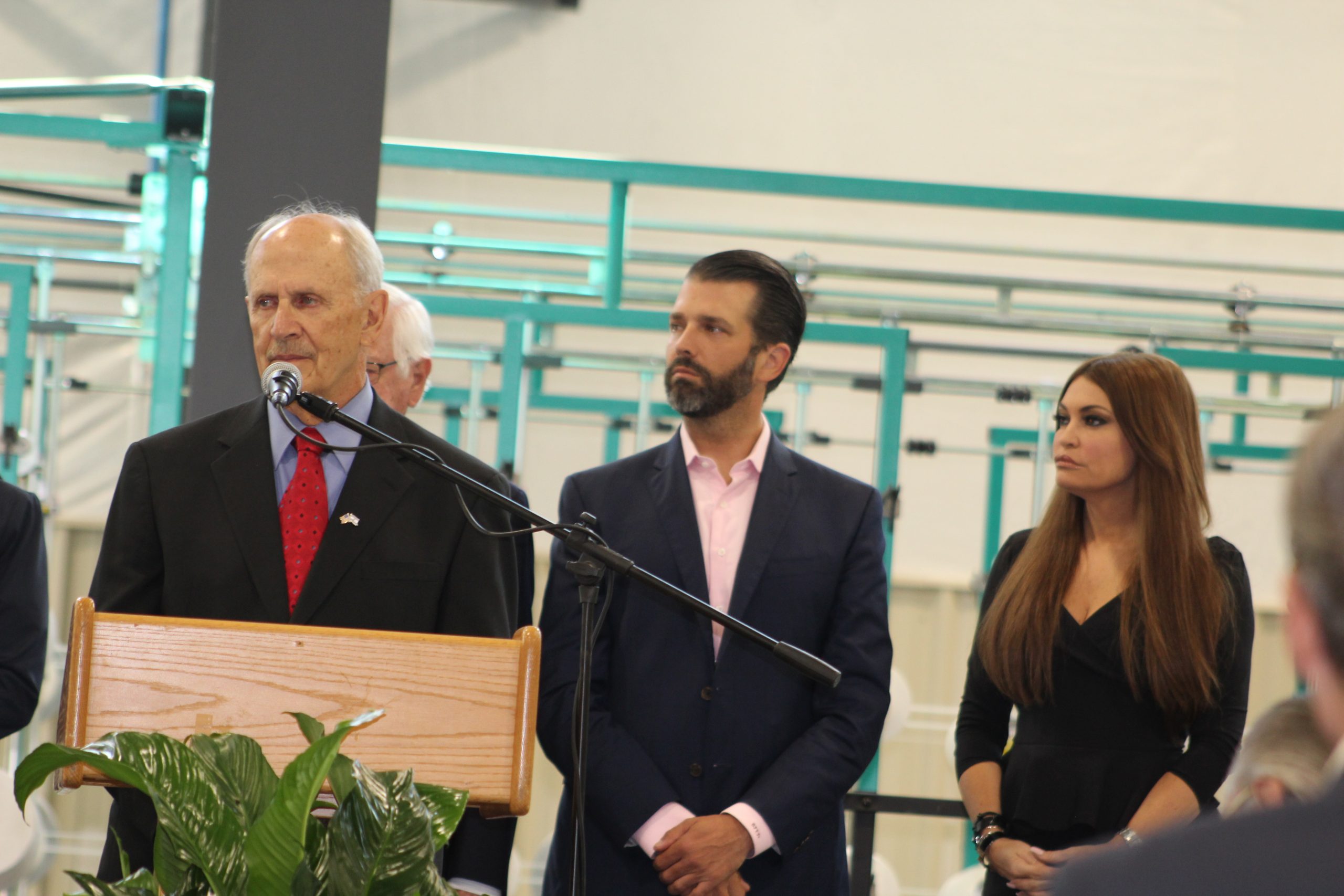 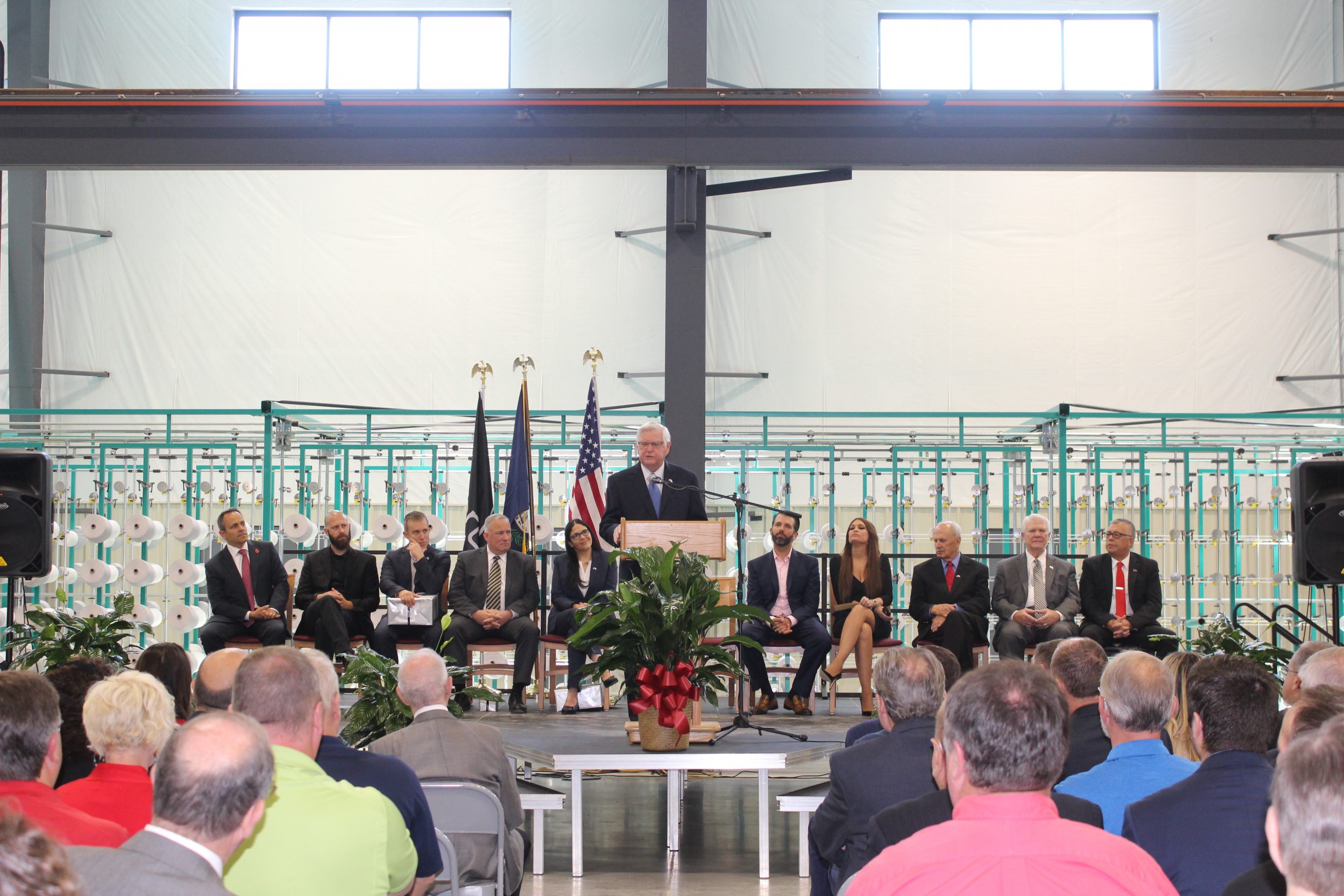 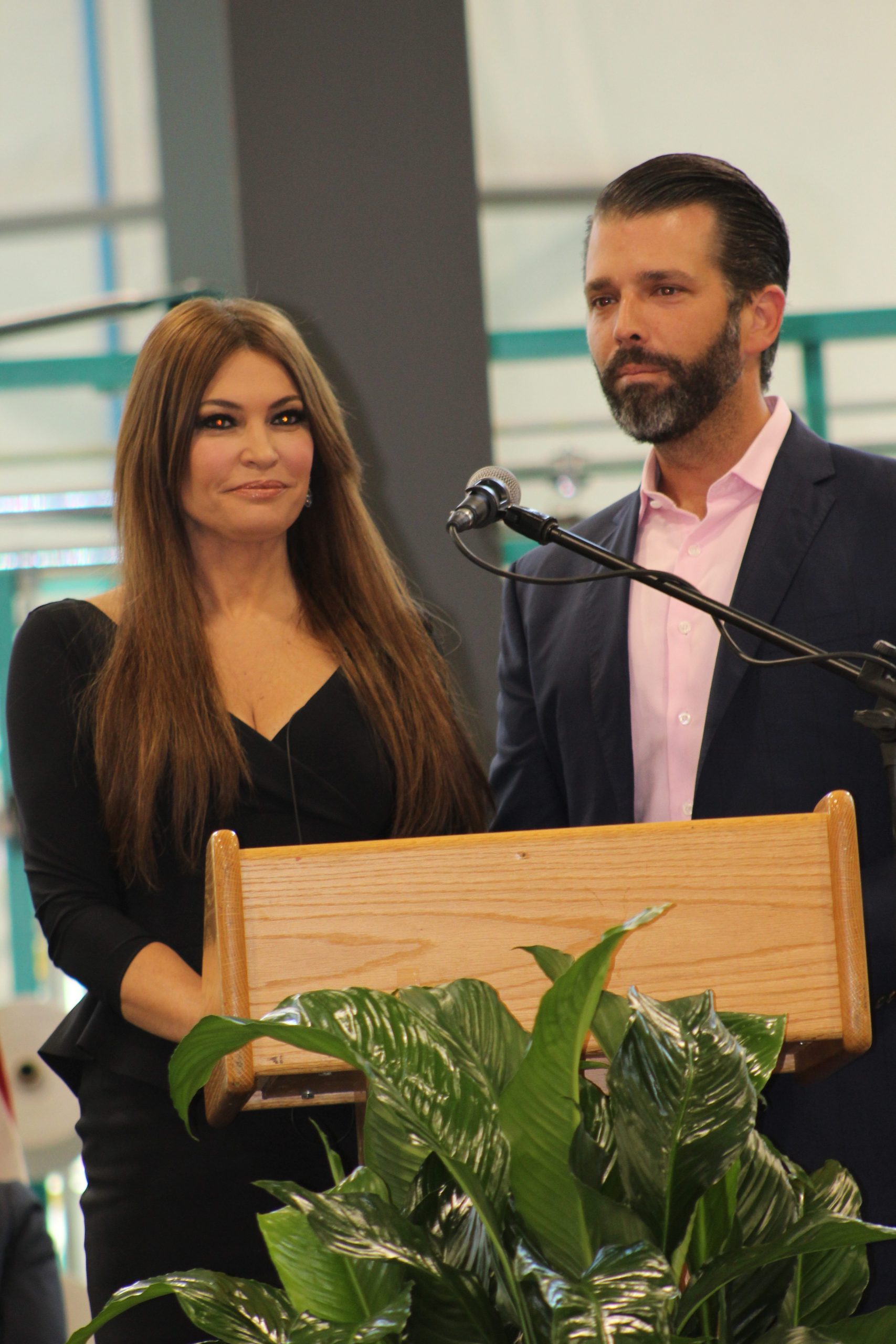 An esteemed group of dignitaries graced McCreary County Thursday morning to commemorate the grand opening of the Fibrotex USA facility in Stearns.
Hosted by the Outdoor Venture Corporation’s CEO J.C. Egnew, the event celebrated the beginning of the partnership between the two companies, which is expected to add up to 350 full-time jobs to the county. With more than 200 guests in attendance, the opening celebration and ribbon-cutting ceremony officially began a new era for McCreary County and Kentucky.
Egnew was joined on the dais by distinguished guests: County Judge Executive Jimmie Greene II, OVC Executive Vice President Ray Moncrief, Fibrotex USA President Adi Blum, Congressman Hal Rogers, Governor Matt Bevin, U.S. Army represntative Andrew DiMarco, Counsul General of Israel Anat Sultan, Executive VP of the Trump Organization Donald Trump Jr. and former Fox News host Kimberly Guilfoyle for the ceremony.
Following the presentation of colors by the McCreary Central JROTC and the National Anthem performed by the MCHS Madrigals, Egnew recognized Judge Greene for his support and Moncrief, who was instrumental in organizing and obtaining financing for the $12 million dollar project.
Egnew could barely contain his emotion when intorducing Adi Blum, President of Fibrotex USA, calling the partnership vital to the future success of the endeavor, and thanking him for his faith in OVC and McCreary County.
“This is an important long-term partnership that we are building in McCreary County to supply products directly to the Army,” Egnew said. “I anticipate this friendship will far exceed the next decade.”
Blum, a third-generation executive with the Israel-based company, thanked his family for their support over the many months spent in developing the new project.
He also pledged that Fibrotex would not only help provide much needed jobs to the community, but also become a valued member of the community.
“I know in my heart that this program will not only strive to create more jobs for this community,” Blum said. “We promise to be a positive contributor to McCreary County, and I hope others will follow.”
Egnew praised Congressman Rogers’ commitment to McCreary County and OVC over the years, noting the senior member of the Defense Appropriations Subcommittee “saved our lives many times” and stepped in to resolve a legal challenge to the project.
“We sincerely appreciate the work you’ve done for the 5th District and our Country,” Egnew said.
Rogers opened his comments by speaking directly to the employees of OVC and Fibrotex, as well as the citizens of McCreary County, to honor the work they will be doing over the next decade and beyond, calling it a “day of celebration.”
“Fibrotex is a perfect fit for Southern Kentucky,” Rogers said. “We have the best workforce in the country and a long history of faithful service to our military and our allied forces.”
“I take great pride in knowing that we are producing specialized equipment for the Army in McCreary County, and I believe this new partnership between Fibrotex USA and OVC will impact our rural region for years to come. I applaud J.C. Egnew’s perseverance to create jobs at OVC and extend greater opportunities to our incredible workforce. I also appreciate the long-standing commitments that USDA-Rural Development and Kentucky Highlands Investment Corporation have invested to support on-going growth at OVC.”
In addition to presenting Kentucky-themed gifts to several of the guests on the stage, Governor Matt Bevin praised the partnership, and congratulated Egnew for his perseverance over the decades.
“This exciting project will create substantial new economic opportunity in Southeast Kentucky, while also providing crucial, high-tech products for our nation’s armed forces,” Gov. Bevin said. “Outdoor Venture Corporation has been an integral part of McCreary County’s industrial sector for more than 35 years, and it is great to see the company bring another great business to the region. We thank both OVC and Fibrotex USA for the vital work they do—and for their commitment to utilizing Kentucky’s strong workforce to accomplish their mission.”
The highlight of the morning’s celebrations was an appearance by Donald Trump Jr., and Kimberly Guilfoyle, former Fox News host and Trump campaign staffer.
Trump championed the new plant as evidence of strong ties between the United States and “Our greatest ally – Israel.”
Guilfoyle spoke about the “spirit of Kentucky” and how the new Stearns plant will play an important role in growth.
“There will be 350 new jobs here,” she said. “That means new beginnings, new life and soldiers coming home to their families. God bless all of you for such an important part in this.”
OVC and Fibrotex landed a 10-year, $480 million contract to produce high-tech Ultra-Lightweight Camouflage Net Systems to the U.S. Army. The state-of the art camouflage: modular camouflage system used to conceal military equipment, facilities, troops and other assets in a wide variety of environments.
The special material will be woven at the Fibrotex plant, then sewn and assembled next door at OVC. The Fibrotex plant is expected to create 150 jobs over the course of the contract and beyond, while 200 additional positions will be added to OVC.
Blum personally provided a guided a tour of the facility, exhibiting the specialized weaving and printing machines used to produce the material.

Outdoor Venture has been a central part of McCreary County’s industrial base since it’s founding in 1972. Beginning with tent manufacturing, the company soon expanded to include many military-based applications and has been a supplier of next-generation military tent systems for the U.S. Department of Defense and others.
Fibrotex Technologies, based out of Israel, has developed and manufactured innovative signature management systems for armed forces and law enforcement around the world for more than 50 years. The newest venture – Fibrotex USA, manufactures customizable systems used by the US military, including lightweight, reversible textiles that prevent sensor detection including UV, visual, NIR, SWIR, thermal IR and radar.