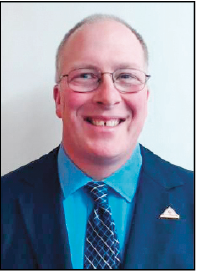 “I firmly believe that our children can be among the highest achieving
students in the
Commonwealth. We must expect the best from our students and from
ourselves.”
Corey Keith
McCreary County
School Superintendent

Most McCreary County schools are performing at a three-star level according to accountability data released by the Kentucky Department of Education this week.
In the new rating system, announced last fall but not fully implemented until this year, Kentucky schools are ranked from one to five stars based on a variety of test data and other academic indicators.
Pine Knot Elementary earned the highest rating in the District with a 4-star rating, while Whitley City Elementary, McCreary Middle, McCreary Central and the District as a whole earned a 3-star rating (McCreary Academy did not receive a ranking in the report, but their data is collated with the overall district numbers.)
Superintendent Corey Keith praised the schools for their achievements, but pointed out there is room for improvement – something he plans to work on over the next few years.
“We are very proud of the hard work of our staff and students,” Keith said. There are many bright spots in the data from our latest KPREP Testing last spring. It’s not exactly where we want to be, but we can celebrate the bright spots.”
Keith said the new data gives him and his administrative team a better understanding of where the District stands as a whole, and gives them a possible road map for improvements in the future.
“We will continue to dive deeply into the data,” he said. “We want to continue and build upon what is working well. At the same time, we want to modify or change practices that are not yielding good results.”
“I firmly believe that our children can be among the highest achieving students in the Commonwealth. We must expect the best from our students and from ourselves.”
(Comments from individual principals can be read in the accompanying article.)
Each grade level (elementary, middle and high school) was evaluated on different indicators to give an overall assessment. At the elementary and middle school levels the results factored in proficiency and distinguished scores in reading and mathematics for a proficiency rating. Scores in science, social studies and writing contributed to a “Separate Academic Indicator’s” score. Finally each school received an overall growth score.
High schools’ scores were based on Junior’s reading and math scores in the ACT, transition readiness and graduation rate.

In Kentucky just 56 schools achieved the highest ranking of five stars, 233 earned four stars, 643 received three stars, 251 received two stars and 89 earned one star.
The Kentucky Department of Education website collects data for all schools and districts in the state that can be accessed by the public. The School Report Card page shows where each school is performing compared to the state average in overall proficiency, separate academic indicators, growth, transition readiness and graduation rate.
McCreary’s elementary schools are above the state average in proficiency, and well above the average in separate academic indicators and growth – ranking “high” in both of those categories.
The middle school is right at the average for proficiency, just below the rest of the state in separate academic indicators, and ranked “high” in growth and ahead of the average.
The only “low” ranking for county schools falls to McCreary Central where the overall proficiency is more than six points below the state, but the school’s transition readiness is a full 10 points ahead of the state average, and the graduation rate of 95.5 is ranked “high” and ahead of the average.
While this is the first year for the “star” rating system, a closer look at the data shows gains in some areas, and losses in others. McCreary County’s two elementary schools, Pine Knot and Whitley City, show overall proficiency rates ahead of state averages in four of five categories when their data is combined.
Individually, Pine Knot Elementary leads the District in overall proficiency – ahead of state averages in all five areas. Reading scores are 5.5 points ahead of average, math scores are 16.3-points ahead, writing 20.7 points, social studies 35.2, and science 6.8.
At Whitley City Elementary scores are slightly below state averages in four categories: reading -1.9, math -8.6, writing -2.2, and science -3.4. The school is 10 points above the average in social studies.
McCreary Middle is below the state average in five areas: reading (-4.5), math (-7.8), writing (-1.7), social studies (-2) and science (-9.6). McCreary Central High School is ahead of the average in two of four categories: reading (1.4 ahead) and writing (11.9). Math (-12.5) and science (-2.7) are the two areas below the state average.
Compared to proficiency scores last year McCreary Central showed gains in overall proficiency in reading and writing, with writing showing a nearly 10 percent improvement over 2017-18. Science and math both declined, with math showing the largest drop of nearly 7 percentage points.
Middle school scores dropped in four categories, reading, writing, social studies and science, with the largest drop being felt in writing with a 9-percent decrease.

At the elementary level proficiency rates grew in every area but reading. Some huge increases were seen in writing, where rates improved more than 23 percent, and science, where there was an increase of over 14 percent.
The data for all McCreary County schools, as well as other schools in Kentucky can be found at www.kyschoolreportcard.com.