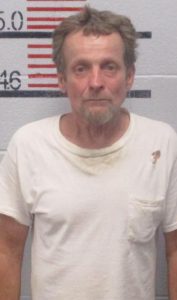 A McCreary County man was arrested
earlier this month in a Scott County drug investigation that led to the recovery of more than one pound of meth and almost $8,000
in cash.
Brassfield Coffey Jr., of Stearns, was one of six people arrested as a result of an investigation by the Scott County Sheriff’s Office after the office received a tip regarding a Lexington man who was on his way to the Winfield residence of Greg Norris to deliver a large quantity of meth and pills.
According to reports the Sheriff’s Office went to the location on Pine Grove Road to investigate the tip. Upon arrival at a camper on the property the officers spotted drug paraphernalia on a table in the camper and a “golf ball sized” bag of meth on the couch.
Three people in the camper at the time, identified as Norris, Caitlyn Maggard, and Christopher Moberly of Lexington were detained at the scene.
While officers were at the camper Coffey arrived at the residence and reportedly told the officers he was there to pick up an ounce of meth he had purchased from Norris.
A K-9 officer alerted to the possible presence of narcotics in vehicles owned by Maggard, Moberly and Coffey.
The investigation led officers to another residence in Elgin, Tennessee, where Michael and Magdalene Troxell reportedly were found with a quantity of meth they admitted they purchased from Moberly and Norris.
The case is ongoing and is being conducted by the DEA office in London.

Methamphetamine has a street value of about $80 per gram, making the estimated value of the drugs confiscated about $35,000.