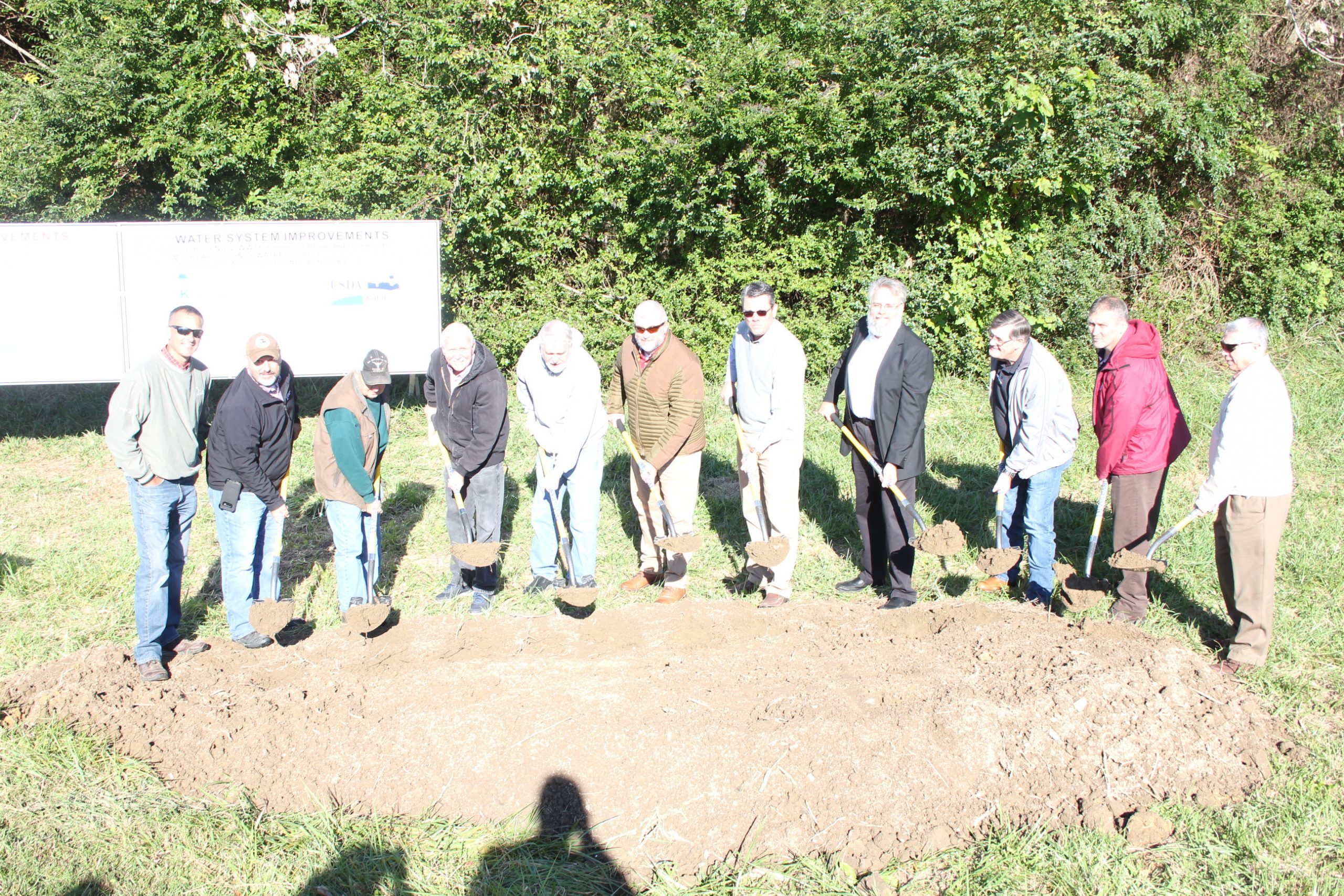 Photo by Greg Bird
Members of the Water District Board and local officials broke ground on a new water line project in Stearns.

The McCreary County Water District officially kicked off their latest project, a water main upgrade from Stearns to Smithtown with a groundbreaking ceremony Thursday morning.
The ceremony, attended by Representative Ken Upchurch, Deputy Judge Executive Nathan Nevels and members of the Water District Board, represented the start of a $2.2 million project that will install more than 30,000 linear feet of new water line, upgrade and renovate pumping stations along the route as well as upgrades to the chemical treatment facility.
“We have worked the last 20 years to provide water and sewer to McCreary and Wayne Counties,” Upchurch said. “I believe the best thing we can do for our citizens is to provide clean drinking water.”

Water District Superintendent Stephen Whitaker said the water line that is being replaced was first installed in the early 1960’s and has been plagued with leaks and other issues in recent years.
“This project has been long in the making,” Whitaker said. “The people of Smithtown have been needing this upgrade for a long time and we are pleased to finally be able to give it to them.”

“This project will affect nearly everyone on that side of the county,” he added. “This will serve the whole community, including the three pumping stations that date back to the early 80’s and two water towers.”
The project is the latest big undertaking for the Water District, but Whitaker said plans are already being drawn up for other upgrades and additions in other parts of the county.
“Our mission is to provide the best service to the people of McCreary County, and we are working hard to make sure everyone benefits.”
The water district funded the endeavor with a $1.3 million loan through the U.S. Department of Agriculture and grants from the Appalachian Regional Commission and USDA for an additional $940,000 in funding, bringing the total cost to over $2.2 million. The high cost of the project prompted the need to seek a rate increase for the District.
“Due to the size and scope of the water line replacement and other parts of the overall program, we had to secure additional funding,” Whitaker said. “Any time we assume debt service, we are asked to seek a rate increase to ensure we have the revenue to cover the loan.”
The District underwent a rate analysis to satisfy the terms of the loan and applied for an increase through the Public Service Commission. The new rate was approved and went into effect this month.
Customers saw a $1.63 increase on water for the first 2,000 gallons of usage and an additional $0.54 for usage over 2,000 gallons, and a $4.84 sewer increase for the first 2,000 gallons, followed by an additional $1.69 for the next 18,000 gallons and $1.50 for all usage over the first 20,000 gallons.

Whitaker said the average customer uses the minimum water usage, and will typically see just the minimum increase on their monthly bill.
There are 6,158 water customers in the District and 1,122 sewer customers in the District.
To calculate the new rate Whitaker said factors such as the cost of the project, as well as contingencies for overages, unforeseen expenses and inflation were added to the rate. Additionally the District was required to factor in additional funding to cover the District’s anticipated pension costs.

While the District will see an eight percent increase in revenue from the new water rate, the pension portion of the new rate represents only about 17 percent of the overall increase.
The project is expected to take six months to complete.