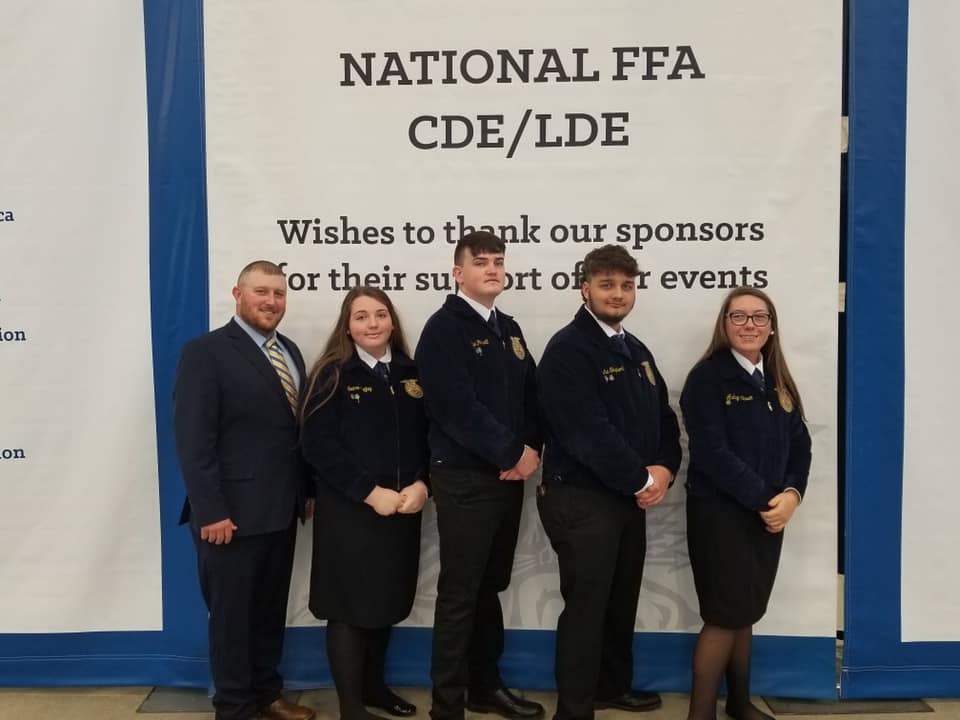 The McCreary Central FFA Forestry team made McCreary County proud this past weekend, bringing home a 6th place award in the National FFA Forestry Career Development Event held in Indianapolis.
Competing against 48 teams from across the country McCreary’s squad of Seara Coffey, Kyle Privett, Elisha Shepard and Ashlyn Slaven placed the highest ever in the event in school history with Privett also earning the distinction of a third-place individual finish – again the highest a McCreary student has earned. For his finish Privett won a $900 scholarship sponsored by John Deere.
The team won an overall gold ranking, with Slaven, Coffey and Privett receiving individual gold awards and Shepard winning silver.
Cameron Lee, advisor to the team, said McCreary County has had a strong tradition in the Forestry competition over the last 50 or so years, with more than 30 teams from the county earning a spot in the national event.
“I think, if you look back at our history, no other school in Kentucky has had more teams represented at nationals than McCreary,” Lee said. “I know, from the last eight years that I have been involved, we have gone six times.”
The team earned the right to represent Kentucky with a top finish in the state competition earlier this year. This team also earned a 6th place finish in the national 4-H competition in Virginia this year. The team placed eighth overall in 2017’s national event.
Lee said there is a lot that goes into preparing for, and competing in these events. The students are tested in a wide-variety of forestry-related subjects, including general knowledge exams, tree identification, tree/forest disorders identification, chainsaw practicum, interviews and a team activity based on their overall knowledge in all areas.
One of the challenges that Kentucky schools face, as opposed to other states with different regulations for FFA, is an age limit and a one-time competition limit. So every year Lee has to train a new group of students to compete. Other states may not have the same restrictions, so their representatives may have several years worth of experience under their belt.
The restriction, though imposing, doesn’t seem to bother the McCreary squads, as Lee said members of past teams are always willing to help train and guide their successors.
“We rely a lot on students who have been there before to help,” he said. “I had one student who never missed a practice and was there every step of the way.”
“There is a whole lot that goes into this,” he said. “It is a year-round thing. These students are practicing three days a week, for two to three hours at a time. These kids work their butts off.”
“They have one year of eligibility, they know they don’t get another shot and take pride in what they do. That is what we represent – hard work and dedication.”
Lee said even while a team is competing at the state and national level, he is working with next year’s team to get them ready for the next events.
The National FFA convention features several other competitive events, and McCreary Central nearly had another team represented- with the Agriculture Technology and Mechanics team falling just one half of a point away from qualifying.

Lee said McCreary Central’s FFA chapter focuses primarily on forestry, AG mechanics and welding – and does very well in those areas.
“We really excel at what we focus on and I couldn’t be more proud of our kids.”