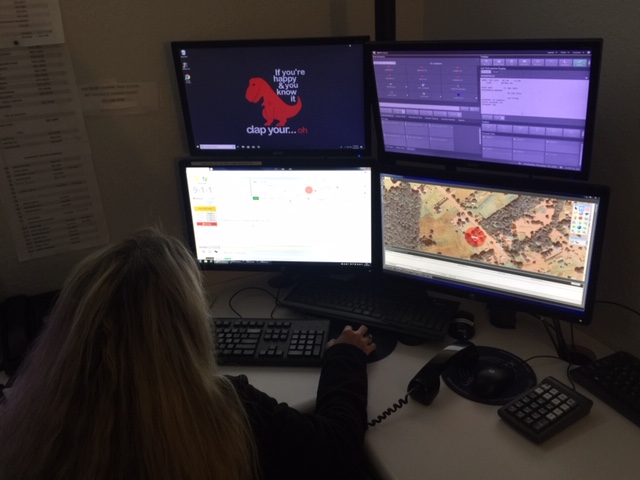 When it comes to emergencies “help” may only be a phone call away, but starting Thursday “help” is also only a text away in McCreary County.
McCreary County 911 officials and staff ran tests this week on the latest enhancement for the local dispatch center- the ability to receive 911 notifications via text message from mobile phones.
Meeting with representatives from InDigital who provide the Texty service Wednesday, the local dispatch center conducted test texts from various locations around the county and with providers such as Verizon, Bluegrass and T-Mobile. (Other cellular providers typically have a shared-use affiliation with other companies, which should allow them to access their cellular network when out of their original area.)
The addition of text capabilities is just another benefit from the enhanced 911 service provided by the local dispatch center and could save lives when a phone call is not possible.
“Texting 911 can be very useful and possibly vital in certain situations,” Barnett said. “Someone may be in a situation where they are unable to speak, or may have a weak signal where a phone call can not be made but a text can go through.”
He noted a recent news story in another county where a choking victim, unable to speak, was able to get medical attention after a 911 operator was able to contact him via text. Other instances, like domestic violence or abduction, could be safely dealt with when a victim is unable or afraid to speak over the phone.
911 employee Luke Powell noted the program had pre-configured responses built in to the interface allowing the dispatchers to quickly respond to a message and gather pertinent information before alerting emergency responders.
The texts show up similar to a standard 911 call, with the number and location of the phone showing up on the computer, giving dispatchers needed information when assessing the nature of the call.
Barnett said the system will be on-line Thursday, but said it is still new and citizens are urged to call as usual when they are able to until further tests are completed. Representatives from InDigital cautioned there may be issues with some wi-fi signals preventing text messages to be delivered. They stated if you were not able to connect to disable wi-fi – thus allowing the signal to go directly to the nearest cellular tower.
Barnett advises residents to enter 911 into their phone’s contact lists as well to aid connection.
The local dispatch center has had the ability to offer texting options since they upgraded their system almost five years ago, but their service provider – AT&T – did not have the capability to do so through their network.
Barnett said AT&T had been promising texting capabilities for a while, but have yet to be able to deliver. So, when two other Kentucky counties: Lincoln and Anderson, announced 911-text, Barnett contacted their directors to learn how they were able to do so.
In August the Fiscal Court authorized Barnett to switch service provider from AT&T to InDigital to allow for the 911 texting capabilities. The service cost $4,500 for installation and an annual fee of $1,800.
Last year the McCreary 911 Center announced a similar service when they gained the ability to accept TTY calls that will allow hearing impaired callers to directly communicate with the center.