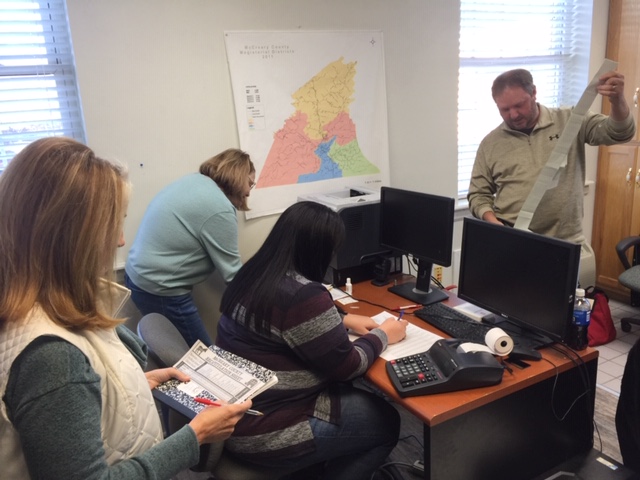 Photo by Greg Bird The McCreary County Board of Elections conducted a recanvass of the Governor’s race last Thursday.

Thursday’s recanvass of the Kentucky Governor’s election revealed no changes from the top three vote getters in the election, leading Governor Matt Bevin to officially concede to Andy Beshear later that afternoon.
With County Clerks from all 120 Kentucky counties reviewing the vote totals from the November 5th election on Thursday, none of them reported any vote changes among Bevin, Beshear and Libertarian Candidate John Hicks.
The only change in the totals came from write-in candidate Blackii Whyte, who had one additional vote added to his total. The missing vote came from Casey County, which brought his election day total to 46 votes across the state.
Locally, County Clerk Eric Haynes, along with the local Election Board (Adam Phillips, Shane Gilreath and Sheriff Randy Waters) reviewed the original records from the election-night printouts from voting machines to verify the original report. Representatives from the two campaigns – Liz Ridner for Beshear, and Debbie Vanhook for Bevin, were on hand to personally review the process and report the findings to their parties.
Beshear edged out Bevin by just over 5,000 votes on election night, less than half a percent of the total votes cast. Bevin refused to concede the election after all counties had reported on November 5th, calling for the recanvass.
Once the election is certified Bevin still could challenge the results of the election directly to the General Assembly. There is no re-count challenge available to Bevin, as Kentucky law stipulates a different form of contest in Governor races.
Following his statement conceding the race, it appears unlikely that the Governor will take that option.
Governor-elect Beshear already has formed a transition team for when he takes office in January.