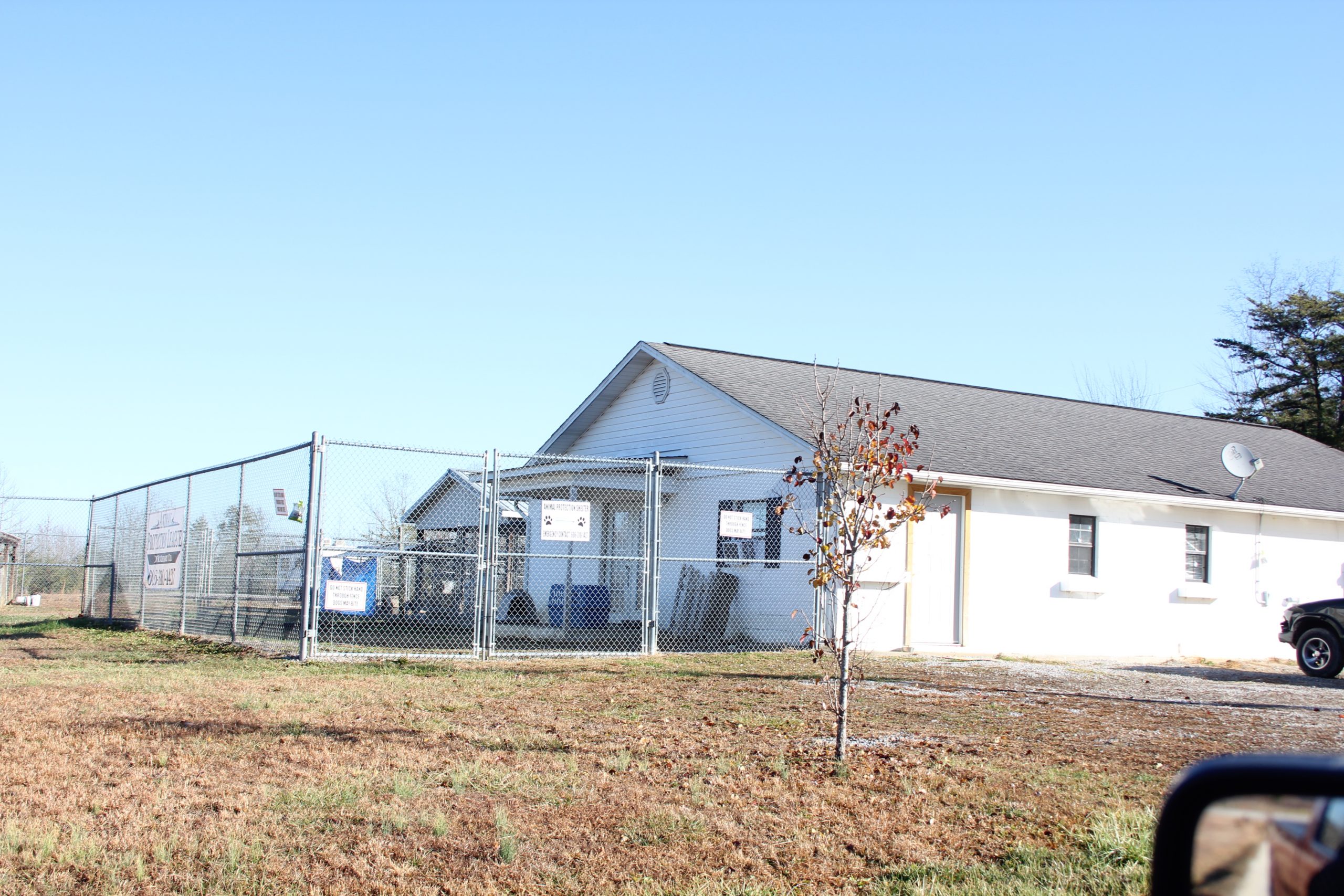 Photo by Greg Bird The McCreary County Animal Shelter is denying allegations of abuse at the facility in Strunk.

Following allegations of abuse and mistreatment of dogs at the local animal shelter surfaced last week, the fate of the local facility is up in the air, but the operator vowed to do what is best for the animals and community.
Friday afternoon a news crew from Lexington’s channel 18 news paid a surprise visit to the McCreary County animal shelter, operated by Pamela Duncan and the Animal Protection League of McCreary County – a non-profit organization. The station had been forwarded a series of photographs reporting to show poor living conditions for the dogs in the shelter, overcrowding and even dead animals in their cages.
The news station reported that during their tour of the facility, they did not see any signs of abuse, neglect or overcrowding. Local officials also visited the shelter Friday and reported finding no violations.
During the interview Duncan gave the news station she denied the allegations, and said the photos were taken out of context.
Duncan told the Voice Tuesday she believes the photos were taken during a period where she was unable to attend to the daily needs of the shelter due to an illness. She stated she felt the photos were designed to be an attack on her in an attempt to take control of the shelter, but ultimately admitted that it was her responsibility.
Duncan further added that since her illness, changes have been made to the structure of the organization to hopefully ensure situations like those shown do not happen again.
McCreary County Deputy Judge Executive Nathan Nevels issued a statement where he said the County was aware of the allegations and was working with local law enforcement to investigate the claims. He further stated that in the past, when County officials did find a potential violation at the shelter, the shelter operators quickly moved to correct the situation.
Duncan said she met with APL Board members Ricky Longmire and Brian Maxwell Monday evening and planned to meet with County officials Tuesday afternoon to discuss the future of the Fiscal Court’s relationship with the facility, which could result in the contract being voided between the two parties. The Voice has not been able to contact the Board members for further comment as of press time.
Duncan said if the County felt the need to pull the contract with the facility and make other arrangements for taking in local dogs, she would go along with the decision.
If that were to happen, she said, the shelter would continue to operate and would focus on spay and neuter clinics and other outreach programs for animals.
“We are going to continue to do our best for these animals and the community – no matter what,” Duncan said.
For the past several years the Fiscal Court has contracted with the Knox/Whitley Animal Shelter to take in stray and unwanted dogs from the County.
In July of this year the Fiscal Court voted to award the contract to the McCreary County Animal Protection League. Under the contract the Fiscal Court pays $40,000 per year for the service. Other funding for the shelter comes in the form of private donations, grants and bingo.
Nevels noted the shelter had not been providing the Fiscal Court with monthly updates on activity at the facility for the past several months, as was required in the contract.
Over the weekend the Voice met with three individuals who had been involved in the shelter in some capacity over the past year who wanted to share their concerns over the conditions.
Speaking under the conditions of protecting their identity to prevent possible retribution, the individuals denied claims that they were responsible for the photos sent to the news station, and their only motivation for speaking out was to protect the animals housed at the shelter.
“We want those animals to be treated the way they should be treated,” one said. “The dogs should be fed twice a day, have access to clean drinking water and have comfortable living conditions. If they (the shelter operators) can’t do that, get somebody in there that can.”
The trio alleged, in addition to the poor living conditions, that the animals have not been given the needed and required medical treatments and evaluations, proper quarantine procedures were ignored, and records altered or falsified on some animals.
The Voice could not independently verify the claims, but the group said they had documentation to back up some of the allegations. They said they had shared their information with county officials over the past few days.
When asked if they had spoken to law enforcement, county or state officials about their allegations prior to the news report last week, they said they had not done so out of concern that they would not be allowed to continue working to help the animals by working with outside rescue organizations to find homes for the dogs.
“None of us would be allowed near the shelter,” one said. “All we have done to help those dogs…it’d be over.”
Again, Duncan denied the allegations and pointed to a white-board installed in the office showing the various cages. Each dog is listed in a cage, with sex, medical status and other identification listed.