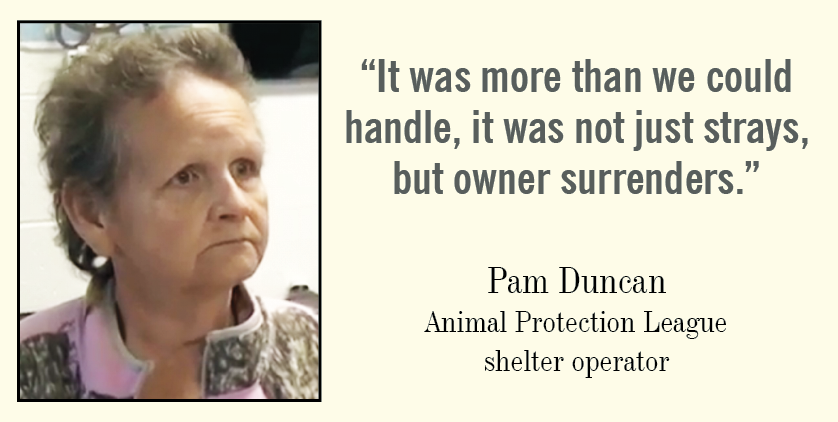 While disavowing allegations of abuse at the McCreary County Protection League’s animal shelter in Strunk, the shelter operators admitted the strain of taking in local strays was too much for the operation to handle and voluntarily surrendered their contract with the county.
In a hastily called meeting Wednesday afternoon shelter operator Pam Duncan and members of the Animal Protection League announced their decision to rescind the $40,000 annual contract with the county and return the shelter operations to a more community-based program.
The decision comes after a news crew from Lex18 visited the shelter the week prior. The station was emailed various photos purporting to show dogs in small cages, feces and dead puppies at the shelter.
APL officials stated the photos were taken out of context, and were the result of an incident that did not reflect how the shelter typically operates.
Duncan said the photos that were sent to Lex18 News were taken on a morning while she was unable to come to the shelter due to an illness.
APL President Ricky Longmire added that two employees had quit the shelter, without informing him, thus leaving the facility with no supervision for two days. The conditions that were shown in the photographs apparently were taken on the morning when the issue was discovered and Board members and other volunteers went to the shelter to clean cages and feed the dogs.
Though the news crew, and county officials who visited the shelter following the report, found no evidence of mistreatment of the animals in its care, the APL Board decided it would be best for the county if the contract was voided and the animals housed in another location.
Duncan said the shelter’s influx of dogs since taking over the contract in July proved to be overwhelming for the small organization.
“It was more than we could handle,” she said. “It was not just strays, but owner surrenders.”
Longmire said he felt a lot of the issues that led to the return of the contract came down to conflicts within the organization, but vowed the Board was not going to hold a grudge against any individuals.
“We didn’t do the job that was supposed to be done,” Longmire said. “We just want to move forward. We are not placing the blame on anyone.”
“Where we messed up was everyone quit working together,” Longmire added. “There were things we talked about that needed to be fixed, and some of it didn’t get fixed.”
Duncan said the next step for the Animal Protection League would be to reorganize with a new Board, and focus on offering spay and neuter clinics, as well as working with rescue organizations to help local citizens find new homes for dogs they are unable to keep any longer.
She has also arranged discounts with local veterinarians in Williamsburg and Oneida to provide discounted service on spays and neuters for local citizens.
Longmire said County officials were willing to continued to work with the APL and keep the shelter open, but the Board decided to surrender the contract due to Duncan’s health. Longmire added there were plans in the works to make further improvements at the shelter, but a lack of funds put some of them on hold for the time being. He stated he was planning on taking a personal loan to perform some of the work.
“We just want to do what is best for the county and for the dogs,” he said.
McCreary County Judge Jimmie Greene II stated he has been in contact with officials at the Knox/Whitley shelter and believes they will take over the contract when it officially expires. Greene said he hoped to be able to work out details on the new contract in the coming weeks.
The Knox/Whitley shelter had previously held the contract with the county for the past several years until the Fiscal Court voted to approve the new deal with the APL.
Deputy Judge Nathan Nevels said he and Animal Control Officer Milford Creekmore are working with shelter officials to find rescue organizations to take the animals housed in the shelter currently.