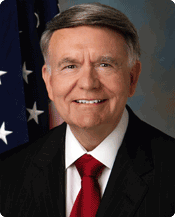 Robert “Mike” Duncan, a McCreary County native, was appointed to the post of Governor of the United States Postal System last week.
Duncan’s confirmation to a seven-year term was announced by Senator Mitch McConnell in a press release issued last Thursday.
“I am proud to congratulate my friend Mike Duncan on his confirmation to continue serving as Governor of the U.S. Postal Service,” Senator McConnell said. “Mike’s long career of distinguished public service in Kentucky and around the country has been marked by compassion, ingenuity and strong leadership. His colleagues on the Postal Board of Governors have recognized these traits and placed their trust in him as Chairman. I’m grateful Mike has chosen to keep lending his talents and experience to the world’s largest postal organization, and I look forward to his continued accomplishments on the Board.”

The Board of Governors consist of nine individuals, who are appointed by the President, to serve as directors of the postal service. The Board selects the Postmaster General, as well as the Deputy, and directs the exercise of the powers of the Postal Service, directs and controls its expenditures, reviews its practices, conducts long-range planning, approves officer compensation and sets policies on all postal matters. The Board takes up matters such as service standards and capital investments.
Duncan, the son of McCreary County entrepreneur Bobby Duncan, who operated the Duncan’s General Store in Strunk for over 70 years.
Duncan has had a long and storied career of professional, public and government service, including serving as chairman of the Center for Rural Development and the Kentucky Governor’s Scholar program. He was appointed to the President’s Commission of White House Fellows in 2001 by President George W. Bush, and served on the Republican National Committee – first as General Council and advancing to the Chair position from 2007 to 2009. Following that post he was elected to serve as the Chair of the Tennessee Valley Authority until 2010.
In 2018 he became a member of the Board of Governors of the U.S. Postal service, and was selected to fill an unexpired term as Governor in August of that year.

In addition to his years serving in politics and on national boards, Duncan resides in Inez, Kentucky with his wife Joanne. The family is the principal owners of two community banks with five offices in the area.