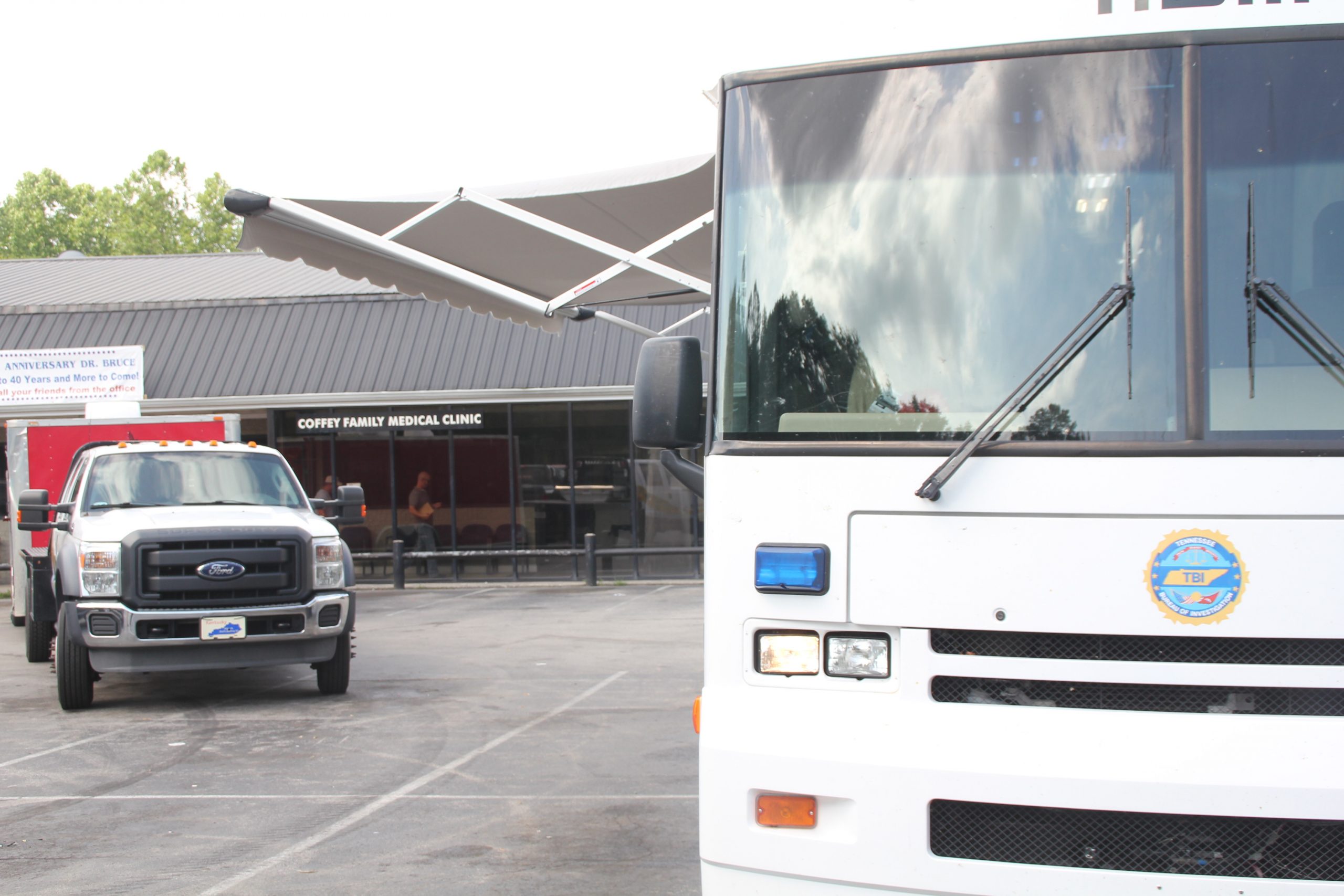 File Photo by Greg Bird
Federal agents raided the Coffey Family Medical Clinic in 2018 as part of an investigation into suspected drug activity. 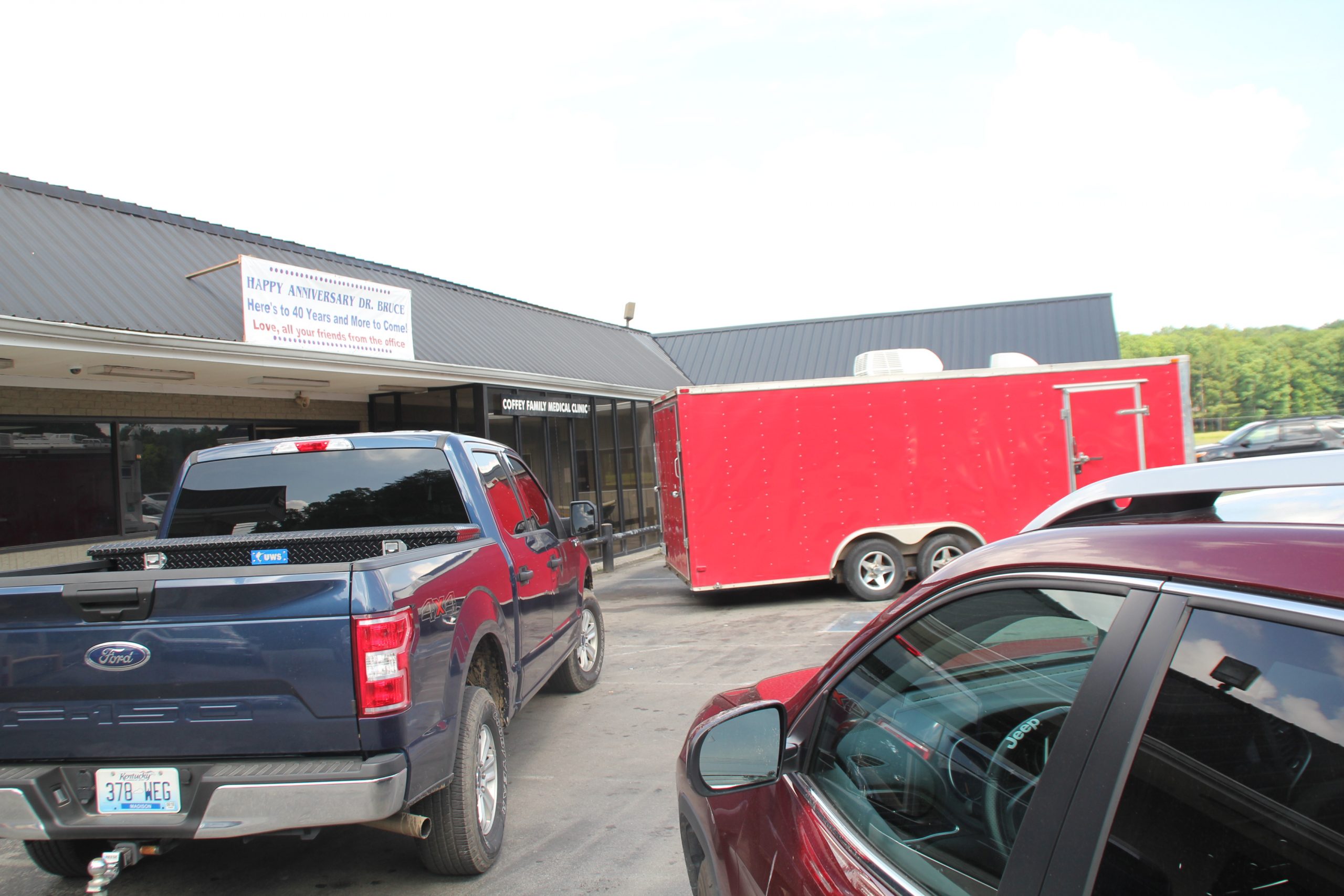 File Photo by Greg Bird
Agents seized hundreds of medical records during the raid, and are now looking to seize money.

While criminal charges are still pending against Doctor David Coffey following a June 2018 raid at his Oneida office and clinics, federal officials have moved to seize $1.6 million and two vehicles
confiscated from the accounts of the embattled
doctor and his associates.
In a filing in the United States District Court in London authorities are seeking the forfeiture of the cash and funds seized from various accounts, as well as two Mercedes Benz automobiles as they are allegedly related to “proceeds of and which facilitated drug trafficking.”

Coffey operated the Coffey Family Medical Clinic, as well as the Life Choices Wellness Clinic in Oneida. Investigators believe the facilities were a key component in supplying drug trafficking in Kentucky and Tennessee for several years.
In an affidavit filed by Shawn Rogers, Special Agent with the U.S. Drug Enforcement Administration, to support the forfeiture request, the investigation revealed the clinic was responsible for the prescription of millions of opioid drugs, with the pills often landing in the hands of drug trafficking organizations. They identified organizations operating in McCreary, Pulaski and Russell counties where a lot of the drugs were distributed, and used the clinic as their “primary source of supply.”
Agent Rogers states the TBI, Pulaski County Sheriff’s Office and Lake Cumberland Drug Task Force identified Coffey as “facilitating the distribution of controlled substances to drug traffickers operating in southeastern Kentucky.”
The doctor and his associates were believed to “have been involved in a conspiracy to dispense Schedule II and III controlled substances, and are ultimately responsible for millions of Schedule II controlled substances being prescribed illegitimately to Kentucky and Tennessee patients.”
The investigation examined records from the clinic and found nearly 5 million units of schedule II controlled substances were prescribed between January 2010 through March 2018. Over that period over 1 million of the pills, representing 21-percent of the total, were prescribed to individuals with a McCreary County address.
The affidavit states a special agent, acting as an undercover officer, visited the clinic on four occasions posing as a patient. On the first visit he obtained a prescription for 56 Hydrocodone and other drugs without a physical examination. The agent also overheard an individual, a supposed drug trafficker, talking to several other patients and advising them what to say to get their prescriptions.
Upon subsequent visits the officer was able to get prescriptions while visiting with a doctor for less than a minute on average. He also observed a man exit the adjoining pharmacy and hand his prescription bag to a suspected trafficker.
The investigation also interviewed several individuals, including staff at the clinic and former and current patients.
One staff member testified that Dr. Coffey left pre-signed prescriptions for controlled substances at the office to be used when he was unavailable. Another reported the doctor instructed staff to not allow authorities to review patient records and to call him if the DEA visited, so he could sneak in the back door.
Patients also told investigators that they were able to receive prescriptions for Hydrocodone without being subject to pill counts, and at least one admitted to diverting his prescription to other individuals.
Dr. Coffey’s attorney told the Lexington Herald last week that Coffey is fighting the request to forfeit the funding, and noted there have been no criminal charges filed since the raid more than 18 months ago.
One June 12, 2018 agents from the Tennessee Bureau of Investigation, Tennessee Highway Patrol, DEA and Operation UNITE, as well as other local law enforcement agencies conducted raids at the Coffey Family Medical Clinic and Life Choices Wellness Clinic in Oneida, as well as a separate facility in Knoxville.
C. Frank Hicks, Resident Agent in Charge of the DEA London Office stated at the time the officers were executing search warrants for records, both physical and electronic, at both clinics, and estimated it would take several months for investigators to comb through the data before issuing any arrests or indictments in the case. Agent Hicks confirmed the raids were the culmination of an 18-month investigation by the DEA Louisville Division, the United States Attorney’s Office Eastern Kentucky District and Internal Revenue Service concerning drug overdose deaths in Kentucky, including McCreary County.