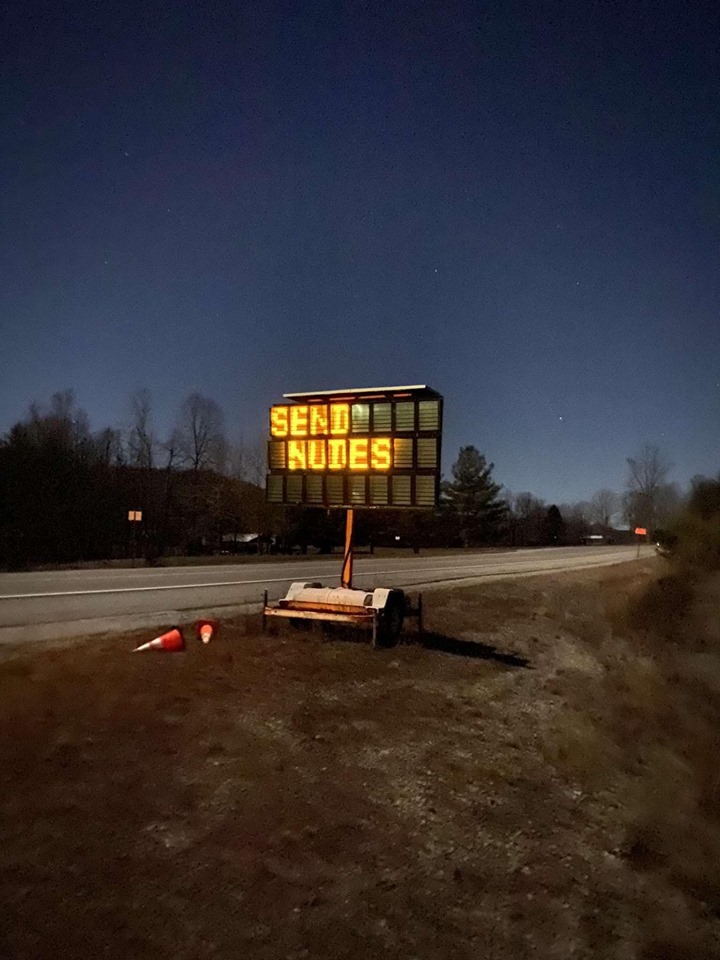 The mystery of who tampered with a digital road sign last week may be solved after three people were arrested, and a fourth faces charges, Sunday for lighting fires in the roadway – causing traffic hazards on and around Davis Hill.
Constable Cody Stephens stated he made the arrests after receiving numerous reports of someone setting fire to tires and other debris along the roadway, causing a risk of potentially dangerous accidents on the road.
Early Sunday morning Constable Stephens received a tip concerning the sighting of a vehicle seen during one of the fire settings. He managed to locate the vehicle and spoke to the individuals inside. Three of the suspects refused to cooperate, but a fourth confirmed they had been responsible for the fires. The individual also claimed they had been responsible for hacking in to the traffic device and altering the message.
Motorists along Kentucky 92 in Pine Knot were surprised Thursday morning when they encountered the digital road sign – typically used to warn drivers of construction – displaying the controversial message “send nudes.”
The Kentucky Transportation Cabinet said someone had managed to bypass the password-protected device sometime early Thursday morning and hacked the sign to display the vulgar message.
The sign, belonging to a contractor working on the Highway 92 project, was quickly shut down after the message was discovered. (Reportedly the sign was hacked a second time, perhaps by other individuals, but the Voice has been unable to confirm that report.)
Stephens arrested Austin Taylor, 21, Tiffany Strunk/Ridner, 22, and Joshua Crabtree, 26; charging each of them with menacing, disorderly conduct and acts creating fire hazards. Charges against the fourth individual are also pending, Constable Stephens said.
The officer noted he has been meeting with County Attorney Austin Price to determine if additional charges could be levied against the individuals for setting the fires. He also seeks to have the individuals reimburse the Pine Knot Fire Department for the resources and time expended while putting out the fires.
“I take public safety as a priority,” Stephens said. “By setting those fires they could have caused a serious accident, resulting in severe injuries or worse.”
Stephens also added he planned to speak with Transportation Cabinet officials to determine if they also wish to bring charges against the individuals for tampering with the sign.