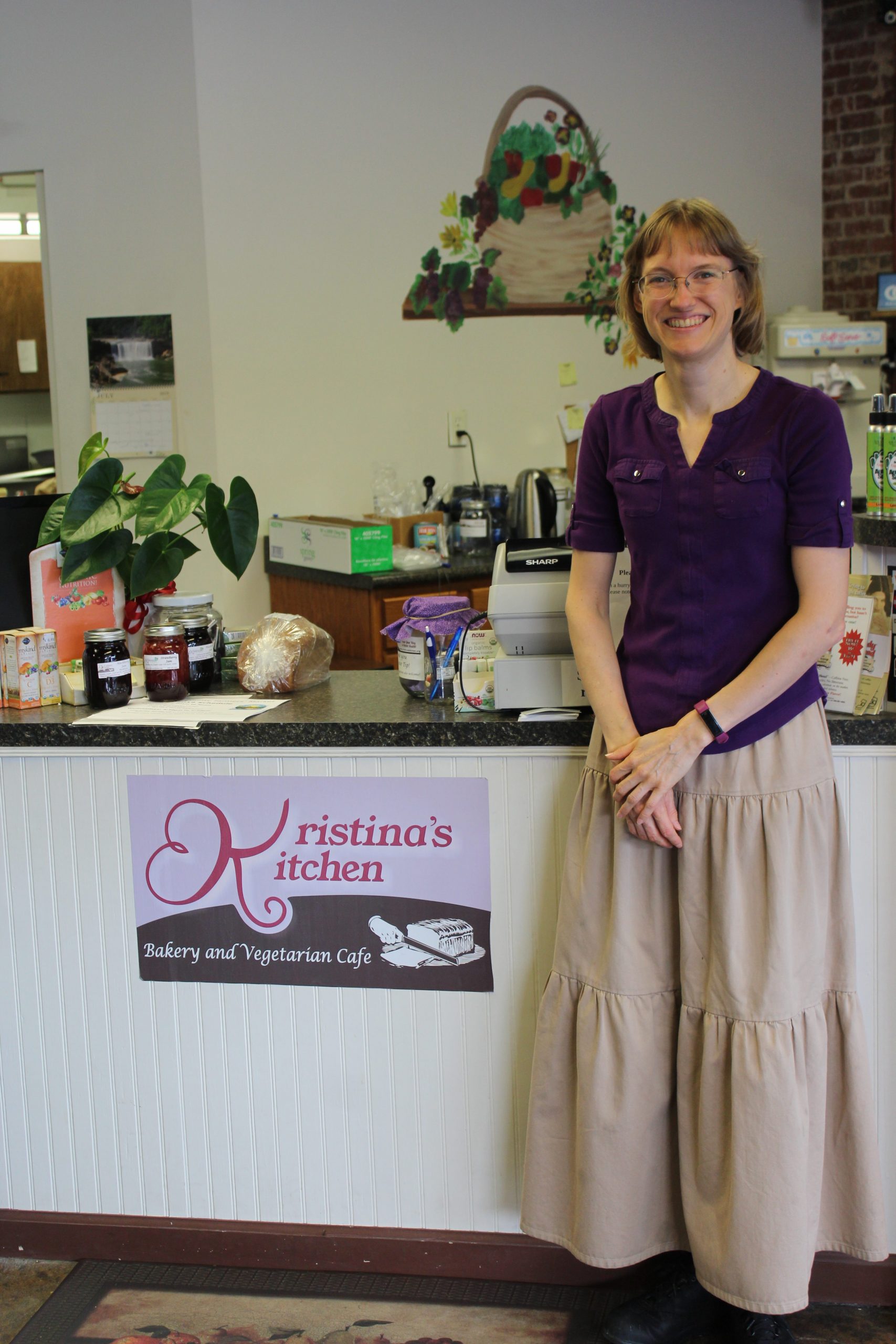 (As part of an ongoing series highlighting non-natives who have chosen to live and establish businesses in McCreary County, “The Voice” spotlights Kristina McFeeters this week-a “foreigner” of ten years who happily calls McCreary County her home.)

For Kristina McFeeters, who arrived here from Washington state, McCreary County is definitely home.
“My husband’s family discovered McCreary County when he was thirteen,” McFeeters shared. “They would come here for canoing, camping, and the outdoors. After Daniel and I got married and decided we wanted to live in Kentucky, I told him I wanted remote, rugged hills and woods. He said I would like McCreary County, and I did! So, here we are, ten years later!”
After living with her husband in the county for five years, Kristina decided to establish a basic plant based restaurant (with bakery and small health food store) in Whitley City. The concept of a plant based restaurant was unheard of in a small, rural county where fast food and “meat and potatoes” are dietary staples. However, today, five years later, “Kristina’s Kitchen” is thriving and is an integral part of the community offering cooking classes and providing a venue for non-profit meetings such as the Homemaker’s Club and McCreary County Farmers’ Market.
Kristina is honest in saying she debated whether to establish her restaurant in McCreary County or Somerset.
“My burden or my passion is to help the health of the community,” Kristina shared. “There really wasn’t accessibility to healthy food here in McCreary County without driving to Somerset. I was doing healthy cooking classes here at the Christian Care Center and in Somerset when people started telling me they wanted to buy my healthy food products. I started praying about it and did consider establishing the business in Somerset, but I felt a burden to educate and help here. I stepped out in faith.”
Kristina did face obstacles in locating to McCreary County-obstacles that could occur in other communities as well.
“The most difficult part to being an outsider was loneliness,” Kristina recalled. “I didn’t know anyone, and my husband’s family was in Somerset. I kept asking myself, ‘How do you find people in a rural area?’”
Kristina struggled to find a way to network and connect with the community.
“Finally, since I have a passion to help people, I began to volunteer,” McFeeters said with her trademark mega-watt smile. “I volunteered to help with projects such as the backpack program and the health fair and began meeting people. I made friends!”
McFeeters faced other challenges when she established her business.
“My plant based restaurant was certainly something different for this area,” she said with a laugh. “It definitely takes creative advertising for this! The cooking classes helped change mindsets because people could see the beauty of healthy food, and they got to discover healthy food tastes good!”
For McFeeters, the local Chamber of Commerce was a great resource, especially when establishing her not so traditional business. Today, five years later, McFeeters continues her close relationship with the Chamber and even recently served as Chamber President.
“The McCreary County Chamber of Commerce helped so much,” McFeeters commented. “They wanted me to be a part of their organization, and it really made a difference. They became like family.”
McFeeters’ number one challenge has been being able to provide a quality product at affordable prices in a low income community.
“I believe the community deserves a quality product,” she emphasized. “I have to keep it affordable, but I can’t downgrade to the lowest quality. If you provide quality, the community will support you. For me, it’s all about the community being healthier and having good quality food.”
McFeeters offered sound advice to both native McCreary Countians and “foreigners” hoping to establish a local business.
“I would tell anyone new to McCreary County, to become part of the community,” McFeeters urged. “Embrace the community. Find the love and beauty of the community and you’ll make it!”
She urged local residents to set up businesses.
“The County needs new businesses,” McFeeters noted. “Be consistent and persevere. Don’t expect to make dollars in the first year. Be consistent in your hours and with your presence. Be organized.”
Networking personally through social media has been important to McFeeters.
“Social media in McCreary County has helped me understand the community and find out about events,” McFeeters noted. “When I first began getting a lot of friend requests from people in McCreary County, I was hesitant to accept because we had always been told to be cautious. When I first came here, almost all my contacts were from Washington, but now after I started accepting requests, over half are McCreary Countians! It’s like a big extended family! Newcomers to the county shouldn’t be overly hesitant to connect and get involved with local social media.”
Kristina identified the best part of living and establishing a business in McCreary County.
“The best part of being here is knowing the people and spending time with them,” she shared. “The beauty of small town business in McCreary County is being with the people. They become your family. God has definitely blessed me.”