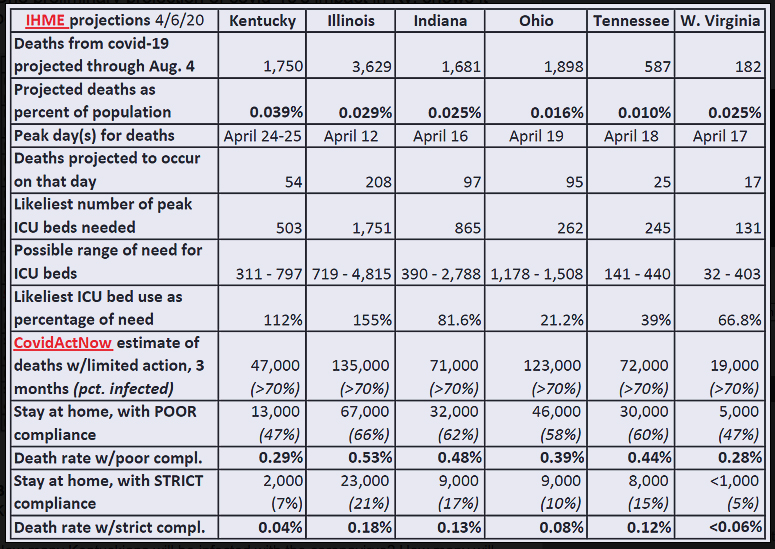 How many Kentuckians will be infected with the coronavirus? How many will develop its disease, covid-19? How many will die from the disease? And how does Kentucky compare to adjoining states?

The answers to those questions are still unclear, mainly because testing for the virus is still very limited, handicapping scientists who track diseases.

A group of epidemiologists has a model, used by Gov. Andy Beshear, which projects that Kentucky will lose less of its population to covid-19 than any major bordering state except West Virginia, a small state with even more limited data.

However, the latest forecast from another model, first reported in the state by Kentucky Health News a week ago, also shows Kentucky not doing as well as it did in the previous forecast.

The model that Beshear has shown at his daily press conferences, in simplified form, gives estimates in round numbers, indicating how preliminary the forecasts are.

It projects that Kentucky will lose 13,000 people to covid-19 if there is poor compliance with Beshear’s orders that have banned mass gatherings, shut down schools and shuttered most businesses and churches. That is 0.29 percent of the state’s population. That is less than any other bordering state except West Virginia, which is virtually the same at 0.28%.

If there is strict compliance, the model projects, Kentucky will lose 2,000 citizens, or 0.04% of its population. That is less than any bordering state, with the possible exception of West Virginia, where the forecast is merely for fewer than 1,000, or 0.06% — apparently rough because of the state’s small population and limited data.

The worst bordering state in both scenarios of the model is Illinois, which is projected to lose 0.53% in the poor-compliance scenario and 0.18% with strict compliance.

The model’s graph for Kentucky implicitly illustrates how preliminary the projections are.

The graph marks the day it was made, April 6, which is almost two months before June 4, the day the model projects Kentucky hospitals would become overloaded with covid-19 patients if there is poor compliance with Beshear’s orders. In the strict-compliance scenario, there would be plenty of hospital beds, but the peak use of hospitals would be even later in June.

This model also predicts a much higher death rate, 0.39% of Kentucky’s population, a higher rate than predicted for any bordering state. The latest forecast of 1,750 deaths is more than twice the number that the model projected a week earlier, when Kentucky’s projected rate was less than that of any bordering state. The earlier projection also predicted later peaks for Kentucky.

The jumpy numbers also illustrate the paucity of data, and perhaps a reason for the big difference within one week. The IHME model is based on deaths, but attribution of deaths to covid-19 varies among states, and Kentucky may be attributing more deaths to the disease than other states.

Beshear said recently that if a person tests positive for the coronavirus, the state counts that person as a covid-19 death, even though almost all 59 Kentucky victims (as of Monday) had other health conditions that could have killed them anyway. Some other states leave that call up to the physician, and the limited number of tests has prevented post-mortem testing of suspected covid-19 victims in Indiana, The New York Times reported.

In a similar story, The Washington Post said, “Marc Lipsitch, a professor of epidemiology at Harvard, said there are probably some people dying with covid-19 who are not dying of covid-19. Such misattribution is a problem for any cause of death, he said, but it is a minor issue that is ‘swamped by the opposite problem: deaths that are caused by covid but never attributed, so the death count is underestimated.’”

Kentucky Health News is an independent news service of the Institute for Rural Journalism and Community Issues, based in the School of Journalism and Media at the University of Kentucky, with support from the Foundation for a Healthy Kentucky.