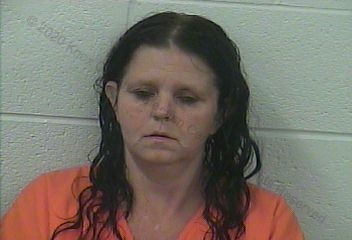 A Stearns woman is facing multiple charges after
allegedly driving under the influence and escaping custody from the McCreary County Sheriff’s Department.
According to the arrest citation Deputies Darrell Loudermilk and Terry Baker responded to reports of a vehicle driving erratically Saturday afternoon. Witnesses reported seeing the vehicle driving on the wrong side of the road and running other cars off the road.
The officers located the Chevy Uplander and made a traffic stop. The driver, identified as Cynthia Anne Johnson, 42, reportedly had slurred speech and difficulty enunciating her words. When she exited the vehicle she nearly fell down and needed assistance keeping her balance. When asked about the erratic driving, she admitted she had been texting. The driver had no license and stated it had been suspended. A passenger in the vehicle, who was seated in a lawn chair in the back of the van, stated her driving had thrown her to the back of the vehicle several times.
Johnson refused to take a field sobriety or blood test, and was placed under arrest on charges of suspected OUI, wanton endangerment, no insurance, operating on a suspended license, reckless driving and texting while driving.
While Deputy Loudermilk was finishing up the arrest report and waiting on a transport officer, Johnson was handcuffed to a railing outside of the Sheriff’s Office to smoke a cigarette and call her mother. At some point she slipped out of the handcuffs and ran off.
Upon noticing the escape a brief search was initiated, but Johnson could not be located in the vicinity. Deputy Loudermilk went to the suspect’s house in Stearns and asked her mother if she was inside. After first stating she wasn’t in, the mother allowed the Deputy to come inside and search for her.
The officer found Johnson hiding under a bed and she initially refused to come out. After persuading her to surrender and taking her into custody her a second time, Johnson reportedly attempted to run again, but was detained and placed in to custody.
She was charged with escape and resisting arrest in addition to the original charges and was lodged in the Knox County Detention Center.