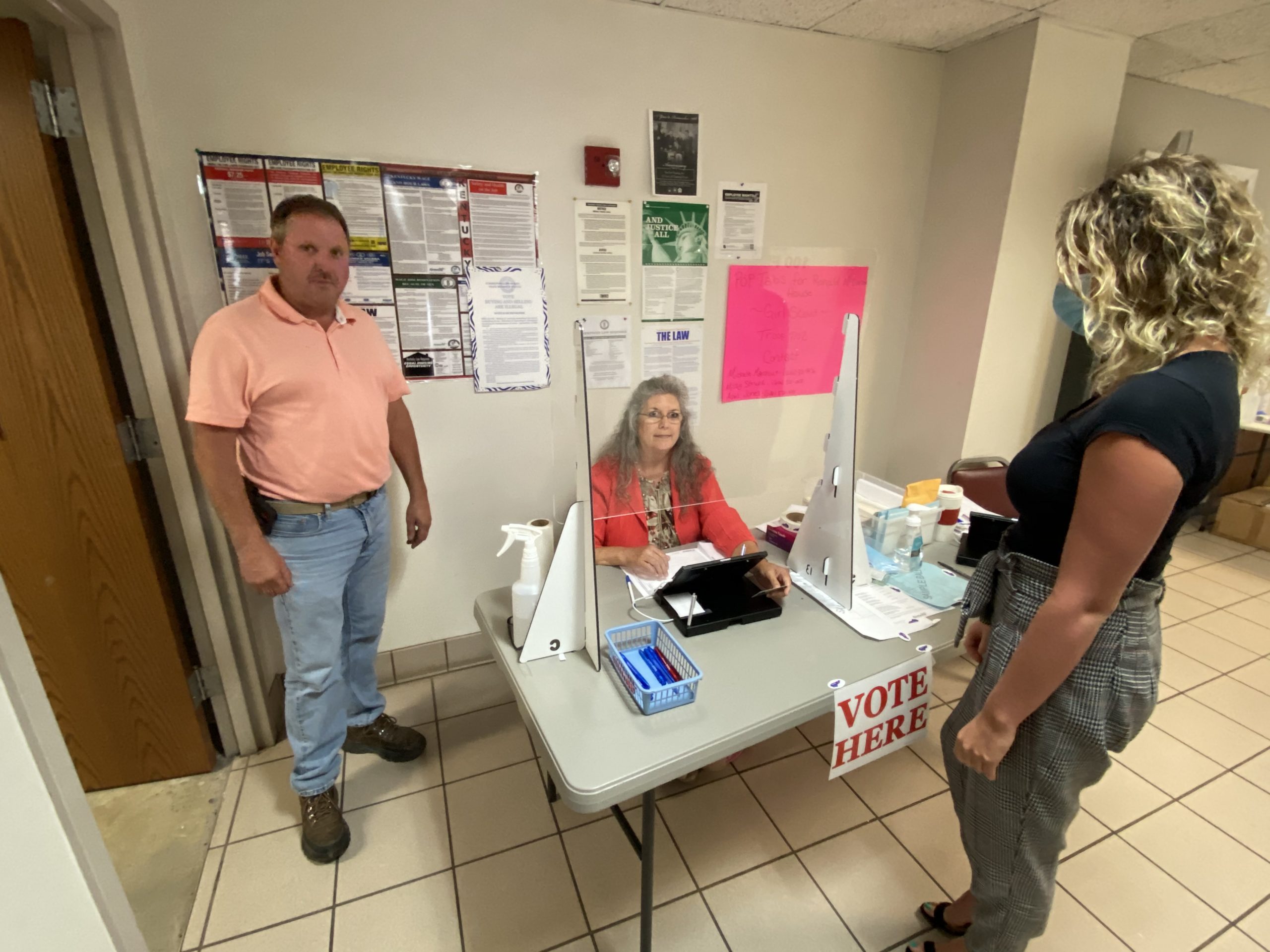 County voters will only have one place to vote, down from the usual 18, in the June 23rd Primary Election, due to COVID-19 restrictions. The new e-poll books will help speed up the sign in and voting process. Clerk Haynes with Joy Ball use an e-poll book to sign in early voter Chante Crabtree.

The Primary election will look and be different on June 23 as only one polling place will be open to voters in the county due to the Covid-19 virus restrictions. All registered voters who have not voted by mailed absentee ballot or early at the courthouse will cast their vote at the Whitley City Fire Department regardless of their normal voting place.
County Clerk, Eric Haynes said he is following the guidelines from the State Board of Elections. The fire department will be staffed with 10 poll workers and 8 voting machines. The poll workers will be using new e-poll books to speed up the sign in process of voters. The e-poll books scan a voter’s drivers license or ID and pulls up their voter registration information, eliminating the time to physically look through the registration books. This will be helpful and time saving in the event of long lines.
Haynes said, “I don’t know what to expect next Tuesday. A lot of people have voted early at the courthouse.” Some people have been upset by only one polling place for the county and he isn’t sure what kind of turn out to expect on Tuesday.
Haynes stated that people can continue to vote early at the courthouse through next Monday, June 22 until the close of business at 4:30 p.m. In person voting at the fire department on Tuesday, June 23, will be from 6:00 a.m. to 6:00 p.m. Voters in line at 6:00 p.m. will be permitted to vote.
The official certified tally can’t be given until June 30, 2020, giving time for all mailed ballots to be received and counted. The night of the election the Clerk can give the vote tally for the fire department and walk-ins.
The Primary races that will appear on the ballot next Tuesday are President, U.S. Senator, U.S Representative in Congress 5th District and State Representative. President Donald Trump is unopposed in the Republican Primary while 15 names will appear on the Democrat side of the ballot running for President, with Joe Biden already having locked in his party’s nomination.
Incumbent Mitch McConnell will have 7 contenders vying to win on the Republican side of the ballot and 10 Democrats trying to win the Primary for United States Senator. The most notable Democrat candidate is Amy McGrath, who appears to be well funded by her party. U.S. Representative in Congress Hal Rogers is opposed by Gerardo Serrano on the Republican side with no Democrats running for this office. The winner of this Primary will be the next U.S. Representative in Congress for the 5th Congressional District.
The most closely watched race in this area may be the contest for State Representative 52nd Representative District between incumbent Ken Upchurch and Rhett Ramsey, both Republicans. The 52nd State Representative District includes McCreary, Wayne and part of Pulaski counties with an average of 43,394 residents.