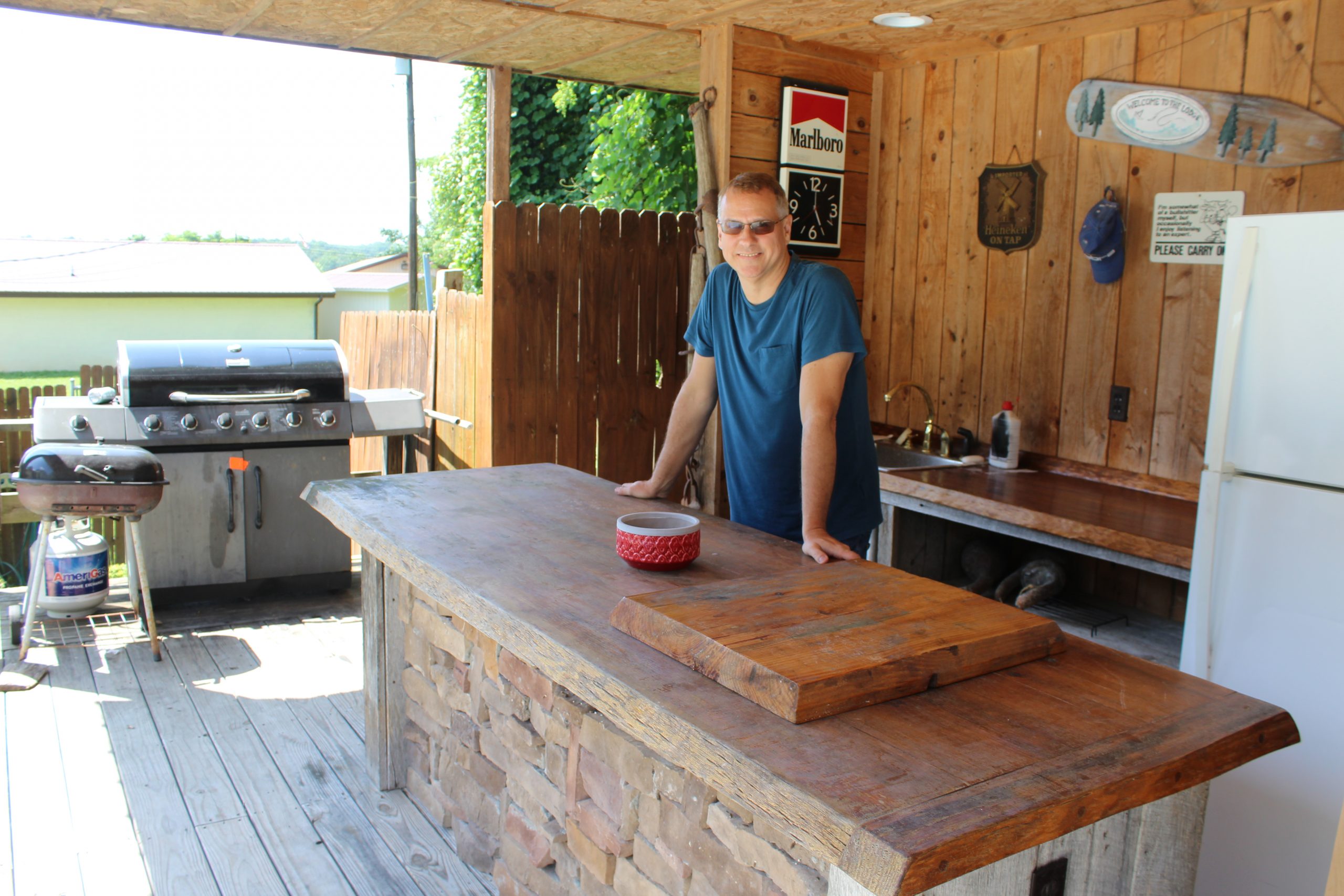 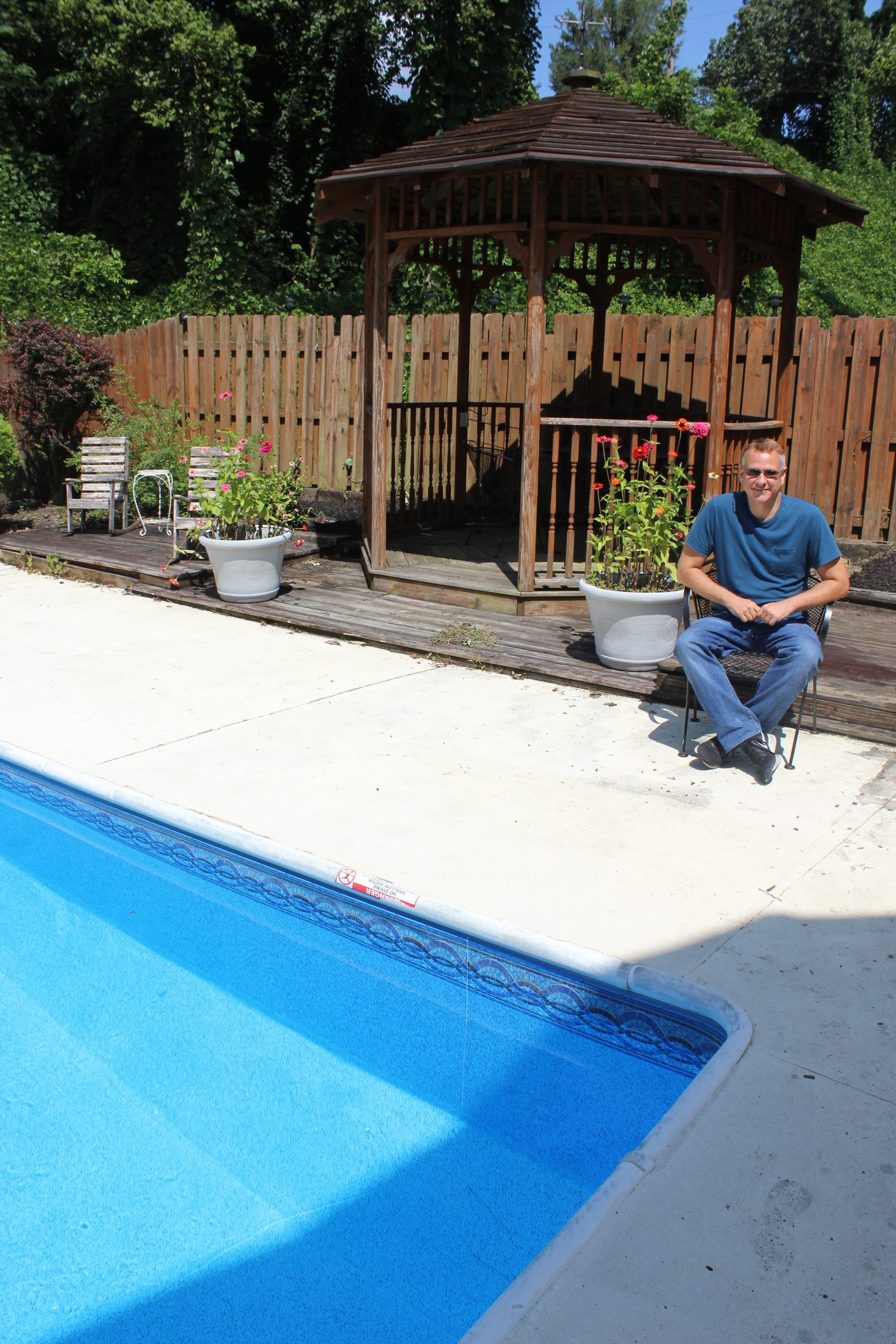 Photo by Eugenia Jones Vanselow has found the residents of McCreary County to be very helpful and friendly.

(This week, as part of an ongoing series regarding non-natives who have chosen to establish businesses in McCreary County, “The Voice” spotlights Eric Vanselow. Vanselow, a “foreigner” from Chicago who has traveled around the world, moved to McCreary County approximately one year ago. He is owner of the Big South Trail Lodge in Stearns and will soon open “Uncle Bucks Beer, Wine, Spirits” in Whitley City.)
If you want to learn how to make a truly delicious Chicago style pizza, just go by the Big South Fork Trail Lodge in Stearns and ask Eric Vanselow.
A true Chicagoan and world traveler, Vanselow discovered McCreary County almost three years ago when he and a realtor were looking for land in the area. Seeking both natural beauty and amenities, Vanselow purchased seventy acres on the Cumberland River (on the McCreary side) with plans of building his home and some rental cabins. A short time later, the Big South Fork Motor Lodge in Stearns went up for sale, and Vanselow decided to invest in it. After purchasing the lodge, Vanselow quickly changed the lodge’s name from Big South Fork Motor Lodge to Big South Fork Trail Lodge with the intent of better reflecting Stearns’ trail town status.
With the Big South Fork Trail Lodge’s twenty-one rooms and swimming pool area, Vanselow has worked hard to make it a charming “oasis.” Having upgraded the rooms and grounds, Vanselow strives to provide a peaceful and safe haven for his guests. As an added convenience and service to both guests and locals, he plans to establish a take-out only restaurant adjacent to the lodge.
Vanselow sees a generation of people who “want to do things and have money to spend on activities.” As a result of that observation, Vanselow also sees great potential in becoming a tourism related business owner in McCreary County. He feels opportunities, especially in outdoor recreation such as canoeing, hiking, etc., are available in McCreary County but, in many ways, remain untapped.
“My goal is to reinvent the lodge to cater to that generation of people,” Vanselow noted. “Simultaneously, I want to maintain a welcoming establishment for those coming to the county for family and school reunions and in connection with federal government agencies in the county such as the Forest and Park Services and the federal prison.”
Vanselow has faced obstacles such as the 2020 COVID-19 pandemic as well as the normal ups and downs of the economy. The Big South Fork Trail Lodge’s string of ownership turnovers created the unique challenge of letting former guests know the Lodge is open, stable, and ready to welcome guests. To meet that challenge, Vanselow focused on marketing. He established an impressive Lodge website and heavily promoted his accomodations through Expedia, Yelp, and other internet sites.
“People forget about you,” Vanselow remarked. “Reinventing a place that has existed and letting people know it is open, moving into the future, and keeping up with the times is a big part of what the Lodge has had to overcome.”
When he first bought the Lodge, Vanselow encountered a difficult time when some guests cancelled reservations due to the shortened 2019 Big South Fork Scenic Railway schedule.
“If anything, that situation taught me that we can’t depend on one attraction,” Vanselow concluded. “We have to diversify. I must give value and services, so I need to partner with many people.”
In 2020, Vanselow has adapted to the COVID-19 pandemic by following state recommendations and protocols and by doing a lot of heavy duty cleaning. He feels the pandemic’s effect on his business has been minimal.
“It hasn’t been too bad,” Vanselow noted. “We were probably off in occupancy for a couple of weeks. I used the free time to move ahead with other plans for improving the place. Actually at this point in time, the Trail Lodge is doing better than it was last year.”
Vanselow’s sincere belief that success can be found in McCreary County is so strong that he is currently establishing a second local business. Vanselow plans to open “Uncle Bucks Beer, Wine, Spirits” in the former ZZ’s Restaurant building north of Whitley City at the beginning of July.
“Uncle Bucks will be a full service package liquor store,” Vanselow said. “I see it as another opportunity to provide a service to the County. It will employ approximately six people and keep business here in McCreary County instead of sending local dollars to Tennessee or Somerset.”
Vanselow offers advice to any business person interested in establishing a tourism related business.
“You have to understand tourism is seasonal,” he shared. “There will be busy times and slow times. Look at the slow times as being a good time to make improvements, but remember you cannot close. You have to be reliable.”
For Vanselow, the best part of being a “foreigner” and starting a business in McCreary County has been the support he has received from McCreary Countians.
“The people are happy I’m here and have been eager to help and support me,” Vanselow declared with a smile. “The organizations in the county have been enthusiastic and very helpful, too. It’s different in a big city where you get lost in the shuffle. It can take months to get permits. People here are friendly, and that makes it easier to do things.”
With his extensive travel around the world, Vanselow knows how it feels to be a “foreigner.” However, as a result of dual business opportunities and the trademark friendliness of most McCreary Countians, Vanselow has found being a “foreigner” in McCreary County makes him feel right at home.
(With twenty years of experience in real estate management and accounting, Vanselow has resided in the Phillipines, Brazil, and Peru and has traveled to fifty-four countries. The fifty-three year old is a pilot, has a dog named Hammer, and enjoys “doing the crazy things” associated with outdoor adventure. He is currently a member of the McCreary County Tourism Board and is involved with the local airport.)