“I feel like we are being robbed again.” – Sue Singleton 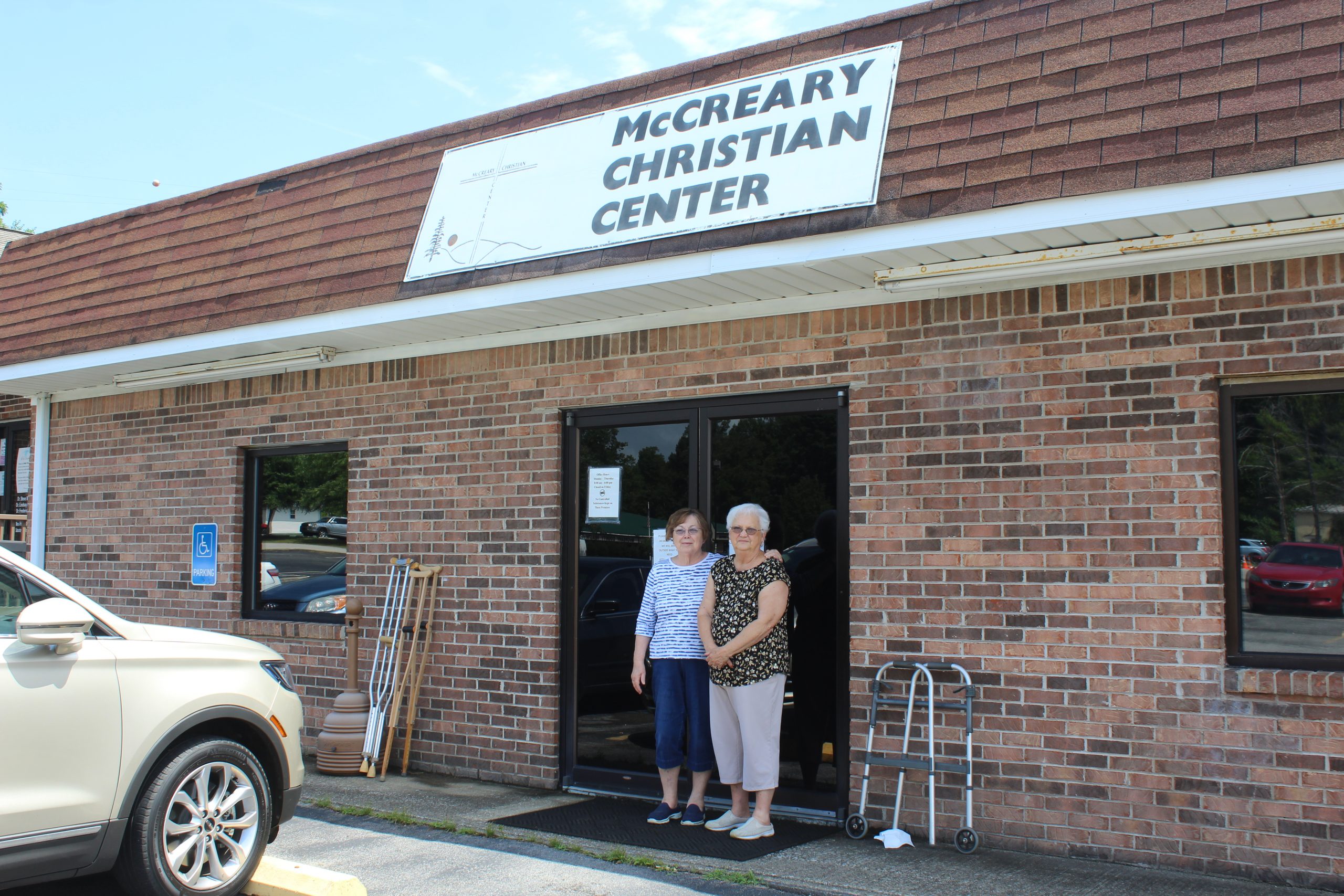 Photo by Eugenia Jones “I feel like we are being robbed again,” Singleton said regarding the February KDA letter demanding repayment by March 2020 for the full amount of the loss of food items stolen from the Center. The McCreary Christian Care Center/Food Pantry is pictured above and was incorporated in 1982. Singleton has served as director for twenty years. The Center’s Food Pantry currently serves 600 local families per month and 275 senior citizens on Senior Day. Pictured left are Azalie Egnew, volunteer and Sue Singleton, Derector.

It was a sad day for the McCreary Christian Care Center’s food pantry when an individual took miscellaneous food products valued at $10,178.59.
According to the Center’s director, Sue Singleton, the food products were government commodity items. The value of the missing food was based on retail and accounted for a significant portion of the Center’s monthly allotment from the United States Department of Agriculture.
The illicit activity was captured on video and was hurtful in more ways than one.
First, the theft diverted food away from people in need. Secondly, the theft occurred in November during the time Director Singleton was recovering from surgery. Finally, the Center has now received written notification from the Kentucky Department of Agriculture (KDA) demanding payment for the food loss.
“I feel like we are being robbed again,” Singleton said of the KDA letter received in February demanding repayment by March 2020 for the full amount of the loss of food items stolen from the Center.
Singleton responded to the demand for repayment with a letter of her own to KDA dated March 4. In the letter, Singleton stated she was informed of an individual selling or giving food items to a local auction after she returned to work following a major surgery. Her letter described a visit from representatives of USDA and God’s Food Pantry to the local food pantry which occurred in December 2019 after suspicions about the theft of food had been confirmed and reported. During that visit, Singleton asked the USDA representative if the Center would have to pay for the food and was told restitution would most likely be sought from the individual responsible for taking the food.
Singleton ended her response to KDA’s demand for repayment by noting the injustice of the Center suffering the loss of items stolen and then being asked to pay for the stolen items.
Currently the Center is appealing KDA’s demand for repayment through an attorney.
In addition to the demand for repayment, KDA requested information be provided regarding corrective actions taken since the loss to ensure theft will not occur again in the future. Singleton has implemented eight actions to prevent future theft. A listing of these actions has been submitted to KDA.
In connection with the incident, the Grand Jury subsequently indicted Ruth Ann Foster, Whitley City, KY with one count of: “Theft by Unlawful Taking of the Value of $10,000 or More” by knowingly and unlawfully taking miscellaneous food products of the value of $10,178.59 owned by McCreary Christian Care Center between the dates of November 16, 2019 and November 30, 2019. On Tuesday, a pre-trial conference was set and a public defender appointed.
“The Voice” reminds our readers that an indictment is not an indication of one’s guilt or innocence, but represents that enough evidence exists in a case to pursue the matter in a court of law.