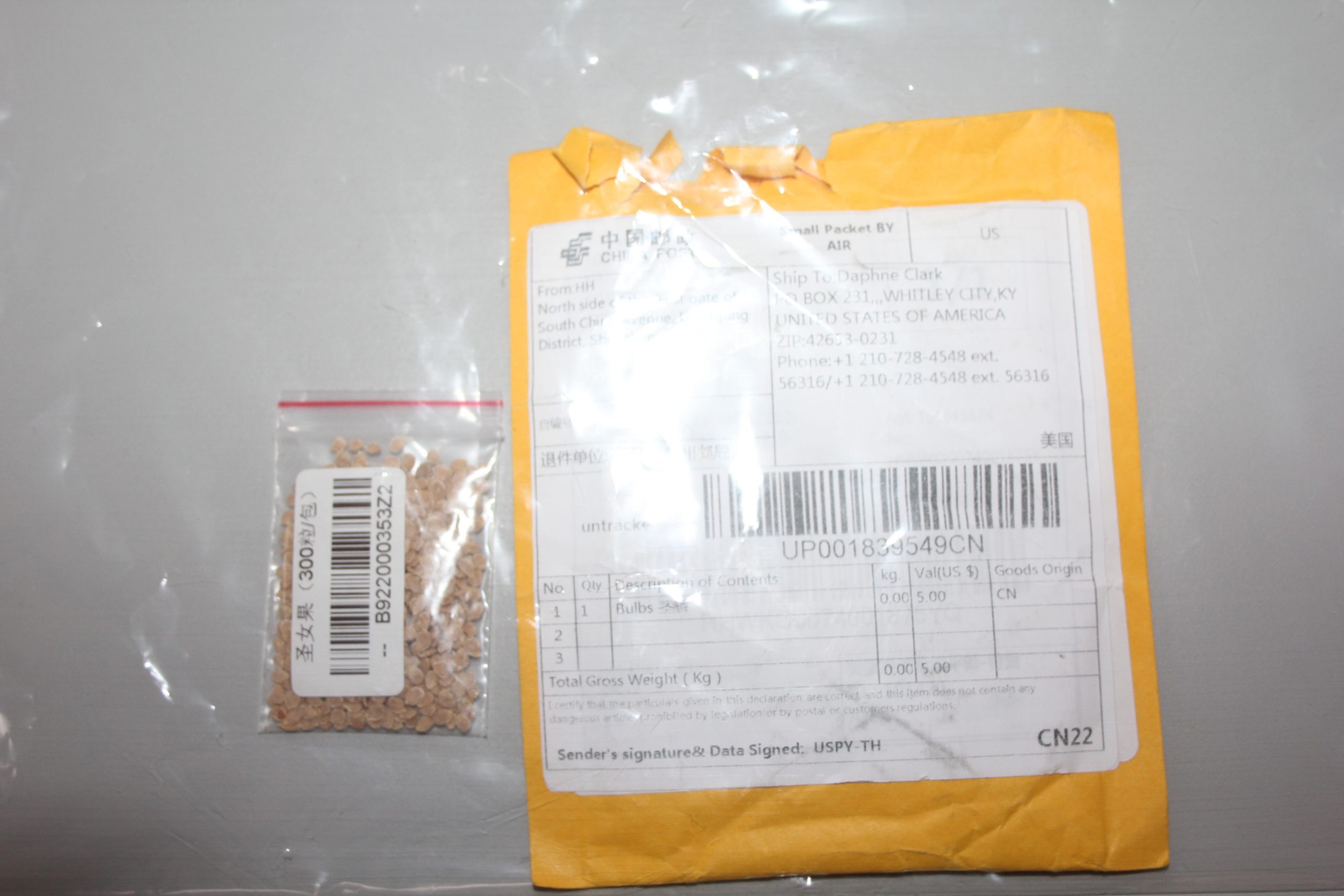 If you receive a package of seeds in the mail that you did not order, handle them with caution. It is most important that people do NOT plant them or throw them away. Immediately put them in an airtight container and wash your hands. Officials in all 50 states now have reported that residents are receiving unsolicited packages of seeds in the mail from China.
Over the weekend, the Kentucky Department of Agriculture (KDA) was notified of several Kentucky residents who had received unsolicited seed packets that appear to have originated by China. The types of seeds are unknown and may be harmful, especially to our environment. These seeds have even reached our community. McCreary County resident Daphne Clark said that she had ordered organic seeds back in March through Amazon and from an Idaho seller, but the ones she received were anything but what she asked for. Instead of coming from Idaho, these seeds came from Shenzhen0, China. Clark placed the seeds inside a ziplock bag and is planning on sending them in for testing.
“At this point in time, we don’t have enough information to know if this is a hoax, a prank, an internet scam, or an act of agricultural bio-terrorism,” Kentucky Agriculture Commissioner Ryan Quarles said in a press release issued by his office. “I want to reiterate; do not plant the seeds. We don’t know what they are, and we cannot risk any harm whatsoever to agricultural production in the United States. We have the safest, most abundant food supply in the world, and we need to keep it that way.”
“The purpose of these seed shipments is unclear at this time, but we need to get the message out that it’s important that people not plant them,” said Ric Bessin, extension entomologist in the University of Kentucky College of Agriculture, Food and Environment. “These packets could potentially contain invasive species or plant diseases, so do not throw them in the trash either. Instead, seal them tightly and send them to the U.S. Department of Agriculture’s office in Northern Kentucky.”
They are warning people to not plant, flush, burn, or throw these seeds away. Individuals who have received suspicious packages with seeds should put them in an airtight bag and immediately wash their hands. You may ship the seeds to the United States Department of Agriculture’s Animal and Plant Health Inspection Service’s division of Plant Protection Quarantine at USDA-APHIS PPQ, P.O. Box 475, Hebron, Kentucky 41048.

You may contact the Kentucky Department of Agriculture at 502-573-0282 or email ag.web@ky.gov.