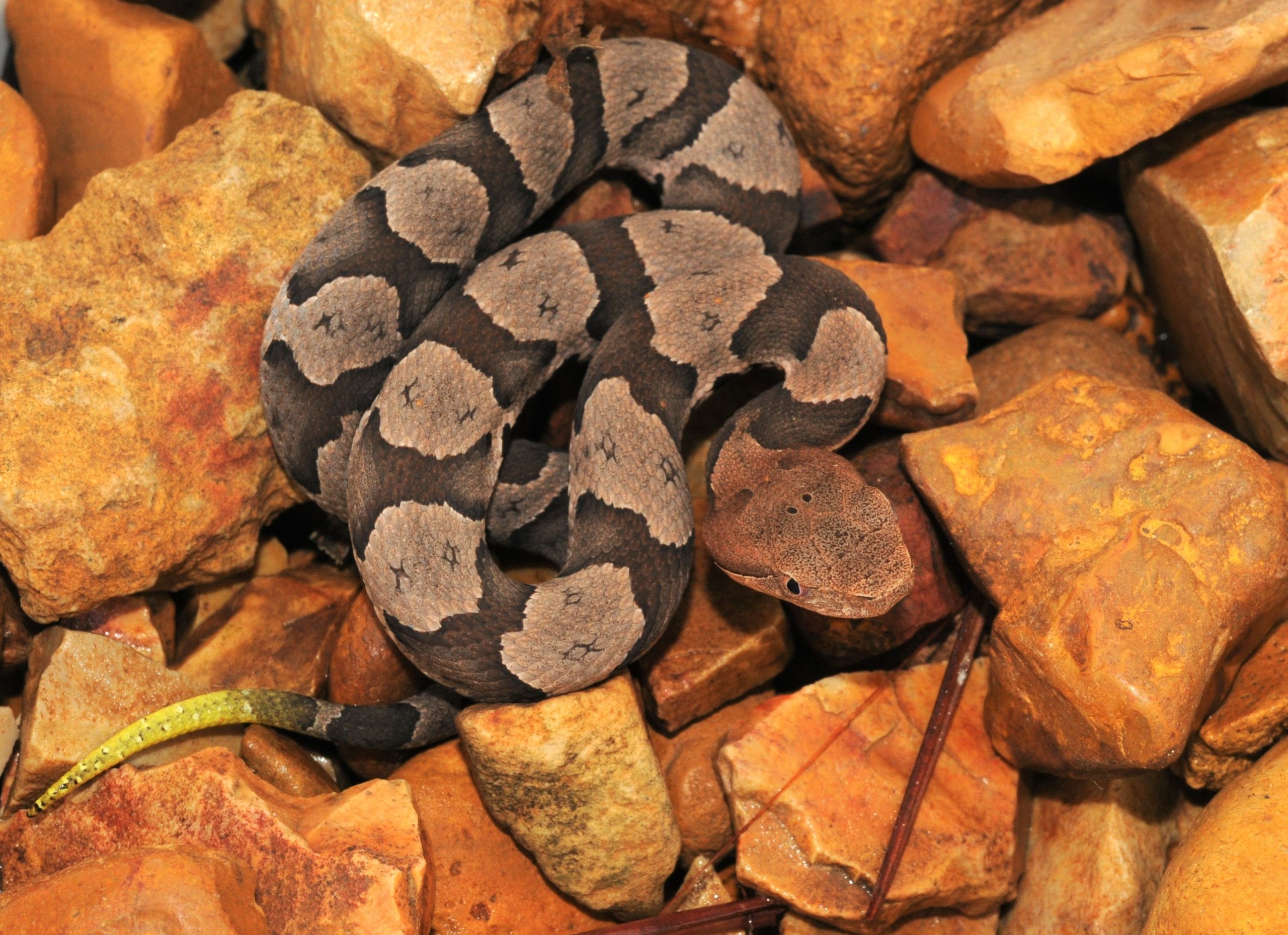 Those browsing through Facebook might have noticed a post proclaiming the month of August as “Baby Copperhead Season” and warning outdoorsy types to be cautious of venomous, juvenile, reptilian offspring sporting yellow tipped tails. However Kentucky Department of Fish and Wildlife Resources Herpetologist John MacGregor noted most copperheads actually give birth in September.
“Most copperhead births occur during the last week in August or the first two weeks in September,” MacGregor said. “Most people never see a baby copperhead. After the young are born, they may stay together for a few days but then they scatter into the forest and become very hard to find. I consider myself lucky to find one or two baby copperheads in an entire year.”
MacGregor noted broods are typically small-mostly five to nine babies per litter-and can be as few as just one or as many as fourteen or fifteen.
“We still don’t know how long the babies stay with the mother, if at all,” MacGregor explained. “Timber rattlesnake mothers stay with their young for a week or more but this level of parental care has never been documented in copperheads.”
According to MacGregor, baby copperheads have copper-colored heads, vertical pupils (like a cat’s pupil), deep heat-sensitive pits on each side of the head in front of each eye, fifteen to twenty-five complete dark crossbands that are widest on the sides and narrow across the middle of the back, and yellow-tipped tails. Just like the adults, baby copperheads are venomous.
“A bite would be very painful,” MacGregor stated. “However, it is usually not life threatening to humans or pets-except pet baby mice! Some bites are dry-no venom is injected.”
Baby copperheads are found in wooded areas mostly; however, many females seek heat as the time for giving birth draws near so they travel to sunny rock outcrops, piles of wood or debris in open fields, piles of rock or brick, old discarded car hoods and other junk, etc.
MacGregor urged folks who find baby copperheads to “leave them be!” He also asked anyone spotting a baby copperhead to safely take a photo and send to him with date and exact location.
Raymond Little, a BSFNRRA Law Enforcement Officer and local snake expert, reiterated MacGregor’s advice to not disturb a baby copperhead-or any other type of snake.
“If you see a baby copperhead or any type of snake while hiking, stop and observe it,” Little urged. “Check your surroundings for other snakes you may not have seen. If you are curious about its identity, take a photograph from a safe distance and show it later to an expert. Snakes typically want nothing to do with people and only bite when they are being injured (stepped on or grabbed as examples) or when they feel threatened or scared. Never attempt to catch or kill the snake. Many snakebites occur when people attempt to kill or catch snakes. Walk around the snake giving it plenty of space and go about your day.”
According to Little, a good online source for quick identifications is the Facebook Group, “Snake Identification.” Additionally, he notes one significant change regarding identification of our local copperheads which has occurred over the last few years.
“Our copperheads are now considered to be Eastern copperheads based on the latest taxonomy,” Little observed. “They are no longer called Northern.”
Little emphasized it is illegal to catch or kill snakes-including baby copperheads- in the Big South Fork National River and Recreation Area.
“Admire snakes such as baby copperheads as part of nature and realize they serve a very important role in the environment,” Little declared. “Enjoy your time outdoors, and remember, venomous snakebite is a rare occurrence. You are thousands times more like to be injured in a car accident, struck by lightning, or attacked by the family dog.”