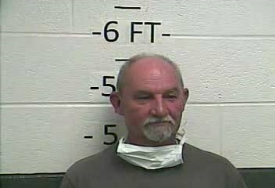 The Whitley County grand jury returned an indictment on a sex related charge against Ricky Ball, 64, of Pine Knot, KY. Monday morning the Whitley County grand jury indicted Ball, charging him with first-degree sexual abuse.
The indictment stated that from June 4 to June 5, 2020, Ball allegedly subjected the victim, who was under the age of 16, to sexual contact. The alleged offense occurred in Whitley County and was investigated by Kentucky State Police Detective Billy Correll.
Ball was arrested on August 18, 2020 by KSP Trooper Keegan Bray and is in the custody of the Whitley County Detention Center. Bond was set at $50,000 and he will be arraigned on September 21, 2020.