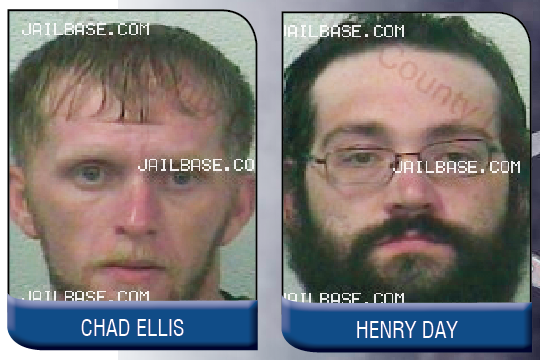 Last Thursday Sheriff Randy Waters received a call from a Pine Knot home owner on Manning Road who had previously reported items stolen from her residence. The caller stated she had recognized some of her stolen items for sale on Facebook and had arranged to meet the man selling her items, under the impression she was an interested buyer. The man had agreed to meet her and told her he would be in a white Explorer.
The meeting place was the Shell Station in Pine Knot. Sheriff Waters, Deputy Tom Smith and Trooper Shaler Jones met the homeowner at the station and waited for the white Explorer. When the Explorer pulled into the parking lot the officers approached the vehicle and checked the ID’s of the two men inside. The men said they were there to meet a woman to sell her some stuff she had seen on Facebook. The officers asked the home owner to check the items in the vehicle. She looked at the items and identified them as her items stolen from her home.
A search of the vehicle revealed an open, black bag in the passenger seat with baggies and a white crystal substance inside. The suspected drugs were within 1,000 feet of a school.
The driver of the Explorer, Henry Lee Day, 28, of Huntsville, TN and the passenger, Chad Ellis, 35, of Robbins, TN were arrested. Ellis was charged with Receiving Stolen Property under $10,000 and both men were charged with Trafficking in a controlled substance within 1,000 feet of a school.
The McCreary County Sheriff’s Department and Kentucky State Police are conducting the investigation.