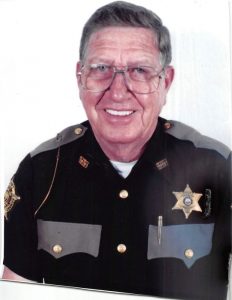 Brad Waters, a long-time and well-known law enforcement official in McCreary County, passed away last week leaving many family members and friends to mourn and reflect back on his life of service.
McCreary County Sheriff Randy Waters remembers his uncle, Brad, as a special person.
“Brad was my uncle,” Sheriff Waters reflected. “Uncles play a special role in life. Since they are not our fathers, uncles can be friends and supporters in a different way than anyone else in our lives. An uncle is a relative and a companion. Uncles are one of the few who can be both-either at holidays or as a fishing/hunting buddy and mentor. It’s a special connection that goes with being an uncle.”
Sheriff Waters continued by describing his uncle’s career in law enforcement.
“Real heroes don’t wear capes,” Sheriff Waters noted. “Police officers make a positive impact in all our lives everyday-from grand gestures at a birthday party to small acts of service by helping someone cross the street. They go above and beyond in their job duties and become real-life superheroes for society’s littlest citizens. Brad made a positive impact in other’s lives and was able to serve our community both on and off the job in the rewarding field of law enforcement.”
District 2 Magistrate Roger Phillips reflected on the service of 88 year-old Brad Waters who still served as constable in District 2 at the time of his passing.
“Brad was a constable numerous times,” Phillips said. “He always answered every call until he became sick this last term. Brad was very kind but firm when he needed to be. He was always professional.”
Without a doubt, James Bradley Waters will be missed.
Throughout his law enforcement career, Waters served as the Chief of Police for McCreary County, Deputy Sheriff, and numerous times as McCreary County Constable for District 2.
Waters was born at Worley Hilltop, the son of Frank A. and Leevadie (Slaven) Waters. He is survived by his wife, Shirley (Winchester) Waters of Strunk, his children, and other family members and friends.
A complete obituary for James Bradley Waters is on page 7A.