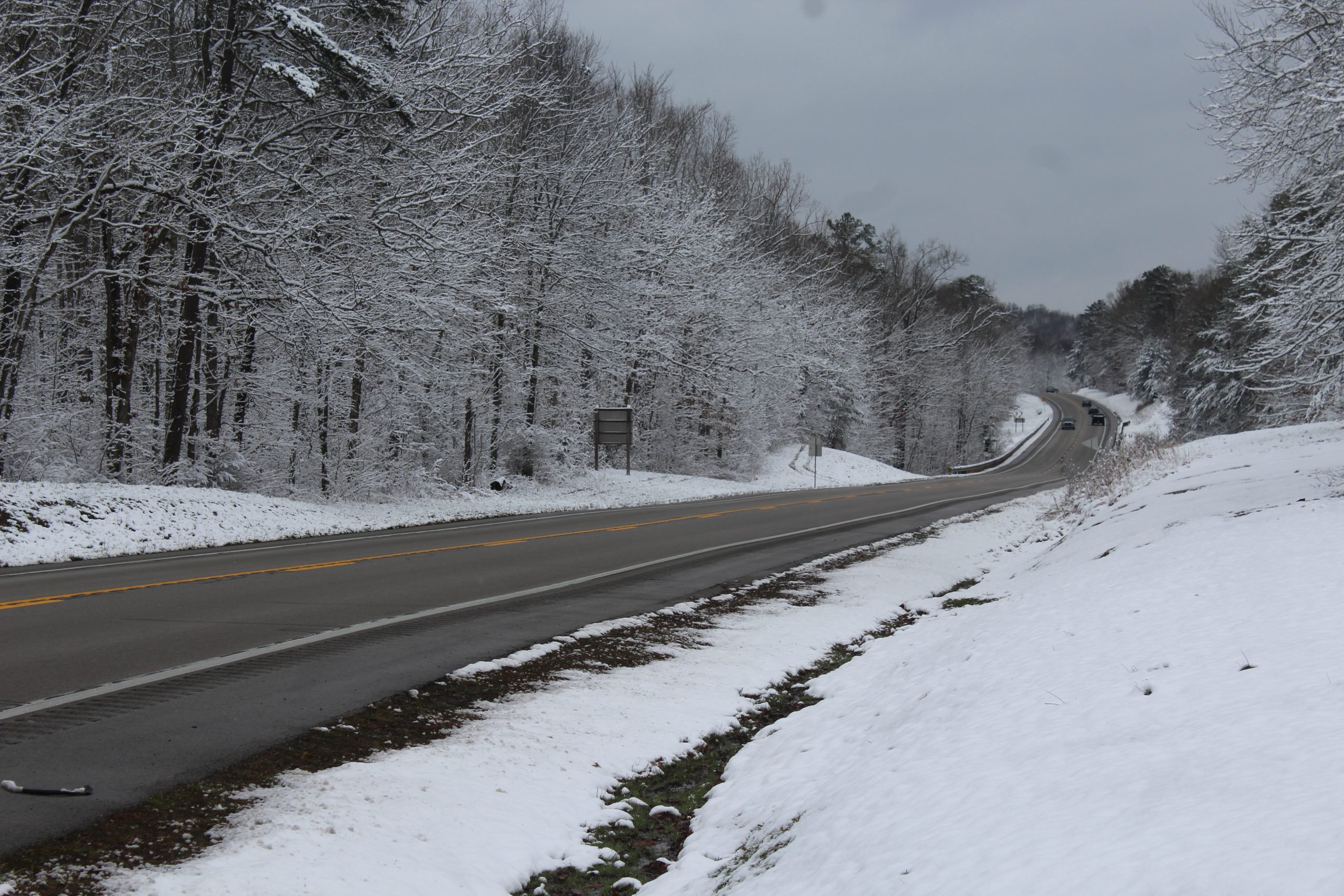 SOMERSET – With more than 29,000 tons of salt on hand, combined with more than 80 snow plows, salt spreaders and other equipment ready in Adair, Casey, Clinton, Cumberland, Lincoln, McCreary, Pulaski, Rockcastle, Russell and Wayne counties, Kentucky Transportation Cabinet District 8 crews are ready for winter weather duty.
KYTC has been monitoring this first winter weather event as it moves across the state. While some crews did some spot treating earlier this morning as of 2 p.m. today, Monday, Nov. 30, all District 8 crews are on standby and ready to report when necessary.
Weather forecasts are calling for dropping temperatures and more snowfall throughout the evening and overnight hours which will create the potential for slick spots into Tuesday.
Since October, district crews have been inspecting snow plows, calibrating salt-spreading equipment and developing snowstorm response procedures to keep District 8 state roads passable during inclement weather.
“We take snow and ice response very seriously,” Chief District Engineer James Jones said. “Highway safety is an essential function of the Transportation Cabinet, and our crews are prepared to meet that mandate by keeping our roads safe during bad weather.”
The Kentucky Transportation Cabinet (KYTC) mission is to keep traffic moving in a safe manner with an emphasis on maintaining mobility along critical corridors and priority routes. When bad weather hits, crews are assigned 12-hour shifts to plow and treat roads using a priority system based on the amount and nature of traffic within each individual county. Priority A routes include major through routes and are those most heavily traveled. Priority B routes include other important, but lesser traveled, state routes. Other roads fall into Priority C.
The Cabinet’s snow and ice information website, http://snowky.ky.gov, provides details about priority routes, helpful winter weather tips, fact sheets and videos on salt application and snow removal.
In addition, the public can monitor winter operations in real time on the state’s interactive traffic system – GoKY.ky.gov – to find out what’s happening on state routes in their local counties.
“The Transportation Cabinet recognizes how important roadway conditions are to motorists, especially during winter storms,” Jones said. “Our highway crews often spend long hours away from home to keep roadways clear and safe for the traveling public. We appreciate their service.”
Throughout snow season, which runs from November to April, highway response teams across Kentucky serve weekly on-call rotations. The teams monitor weather reports when snow is in the forecast and determine when to activate the state’s arsenal of snow-fighting equipment, including more than 1,000 snow plows.

The following measures will help keep motorists safe and prepared:
• Pay attention to weather advisories. Weather will impact your commute on some level
• Travel only as necessary during major snow events. It’s better to be stuck at home than to be stuck on the road
• Maintain a safe distance from snowplows and other heavy highway equipment
• Do not pass snowplows on the shoulder
• Allow time for a slower commute
• Winterize vehicles
• Supply vehicles with blankets, flash light and an emergency supply kit
• Know before you go. Visit goky.ky.gov and download the free Waze app to check traffic conditions before you travel. You can also get traffic information for the District 8 counties at www.facebook.com/KYTCDistrict8 or by following us on Twitter at www.twitter.com/KYTCDistrict8.
• Eliminate distractions (e.g. using phone and eating) while driving
• Cooperate with the expectations of the Quick Clearance law, which requires drivers to move vehicles to the shoulder in the event of a non-injury crash