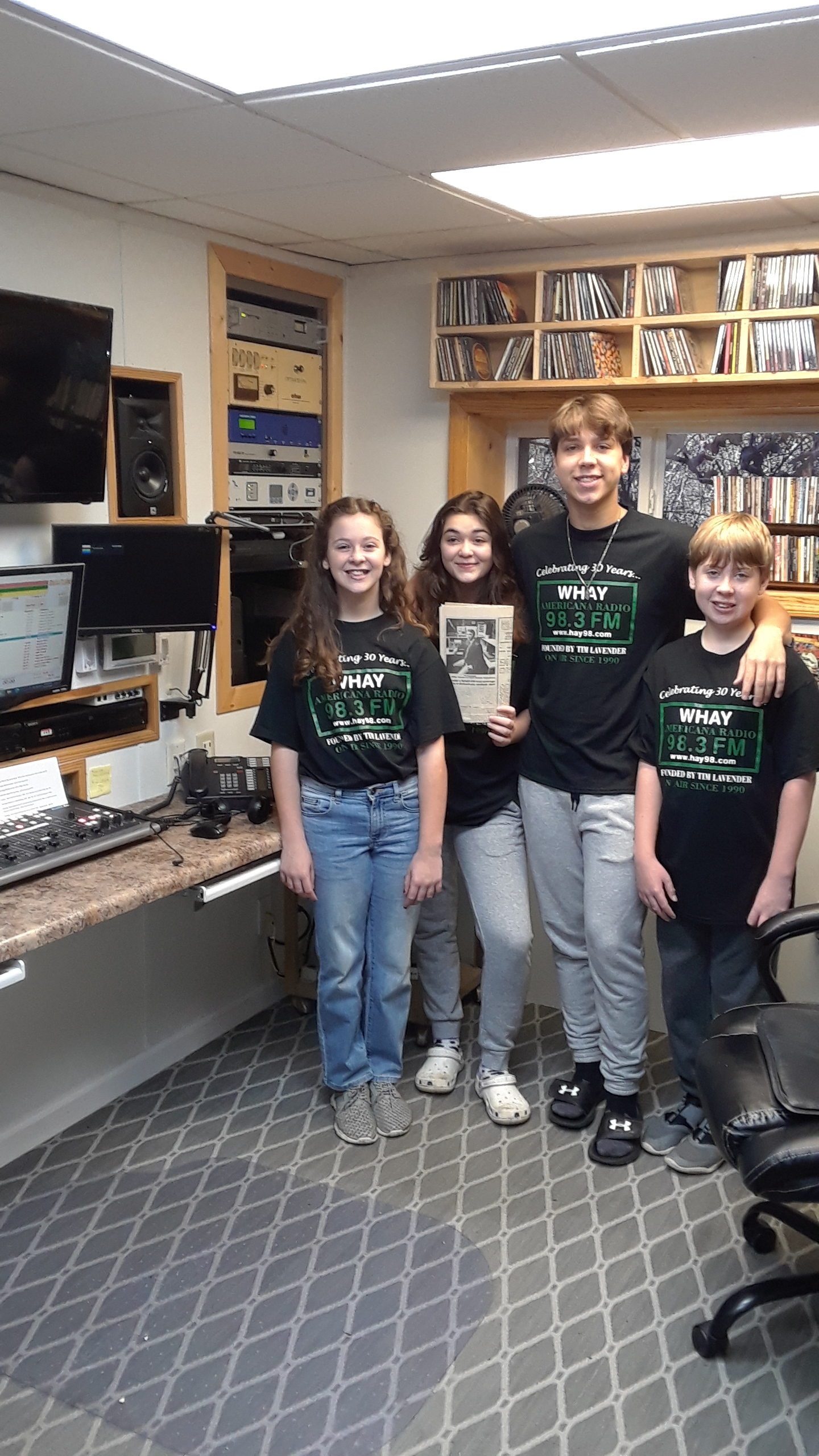 Photo submitted “WHAY is celebrating 30 years on the air, carrying on the tradition started by station founder, Tim Lavender, who passed away earlier this year. Pictured, in the WHAY studio, are Lavender’s grandchildren (left to right): Isabella Newman, Jenna Lavender, Jonathan Lavender and Riley Newman.

McCreary County’s own radio station, WHAY, is celebrating a milestone throughout the month of December 2020. The station has been filling the airwaves of McCreary County, and the surrounding areas, for thirty years.
The history of WHAY Radio actually begins, in a way, with McCreary County’s first radio station, WEQO-AM, which was on air from 1975 to 1988. After WEQO went off air due to financial issues, McCreary County was left with no local radio station. Soon after, the FCC approved an FM frequency for the area. Local attorney and community leader Tim Lavender was able to secure the rights to that frequency and then a construction permit from the FCC in 1989. This allowed for the construction and development of the new station.
WHAY finally got on the air officially in December 1990, with office and studios housed in the basement level of the Hatfield-Lavender Law Office building in downtown Whitley City, Kentucky. The station began at 105.9FM with 3,000 watts of power, serving McCreary County and surrounding areas with a variety of music, programming, and information.
Nearly ten years later, in June 2000, WHAY was able to move down the dial to 98.3FM and increased its power to 5,000 watts. That, coupled with a move of its transmitter to the Wiborg area, has allowed WHAY to reach a larger audience with a stronger signal into the Somerset, Corbin and London areas over the years. In the early 2000s, WHAY also began “streaming” our audio online, allowing for listeners all around the world.
While WHAY has also prided itself on offering a great variety of musical genres and programming, the “Americana” format was officially adopted starting in 2000 and has been the main focus of the station’s format since. This includes alternative country, singer-songwriter, bluegrass, blues and more.
Tim Lavender, who passed away in January of this year, was the driving force behind WHAY from the beginning and worked hard to ensure McCreary County continued to have its own local radio station. Lavender was actively involved in the day-to-day activities of the station and his estate and widow, Linda, are continuing the tradition of the station in his memory.
In December 2020, WHAY is celebrating its 30th anniversary with a number of special activities planned throughout the month. There will be random prize awards including a station bumper sticker, t-shirt, and $30 in cash for each winner announced. Interviews will air at various times with key personnel behind the station, including staff and volunteers.
For those who remember “Cruisin’ the County” which aired on WHAY for more than a decade, there will be “Cruisin’ the County Flashbacks” each weekday just before the 7am, 12noon and 5pm news updates on air. Also, be listening for a special “Dial Donna” program Saturday evening December 5th at 8:00pm. This was a show hosted by Donna Ross in the early 90s on WHAY, which she will revive for a special anniversary show.
Listen to WHAY at 98.3FM and www.hay98.com throughout December for their 30th anniversary celebration.