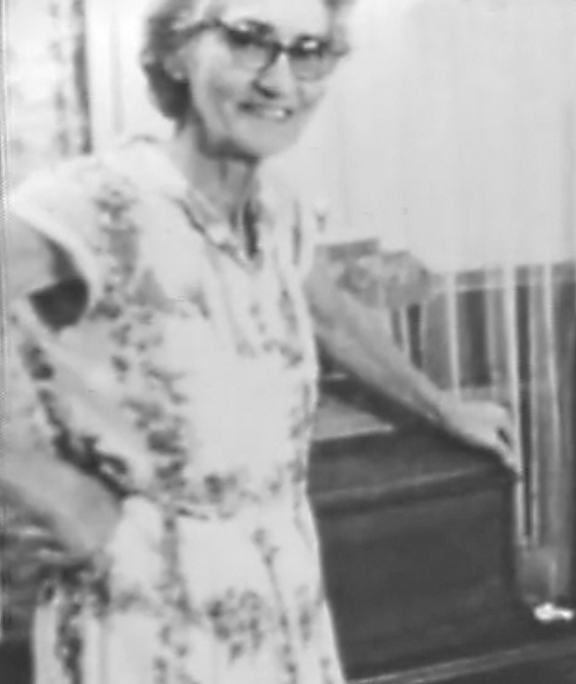 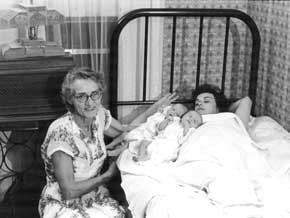 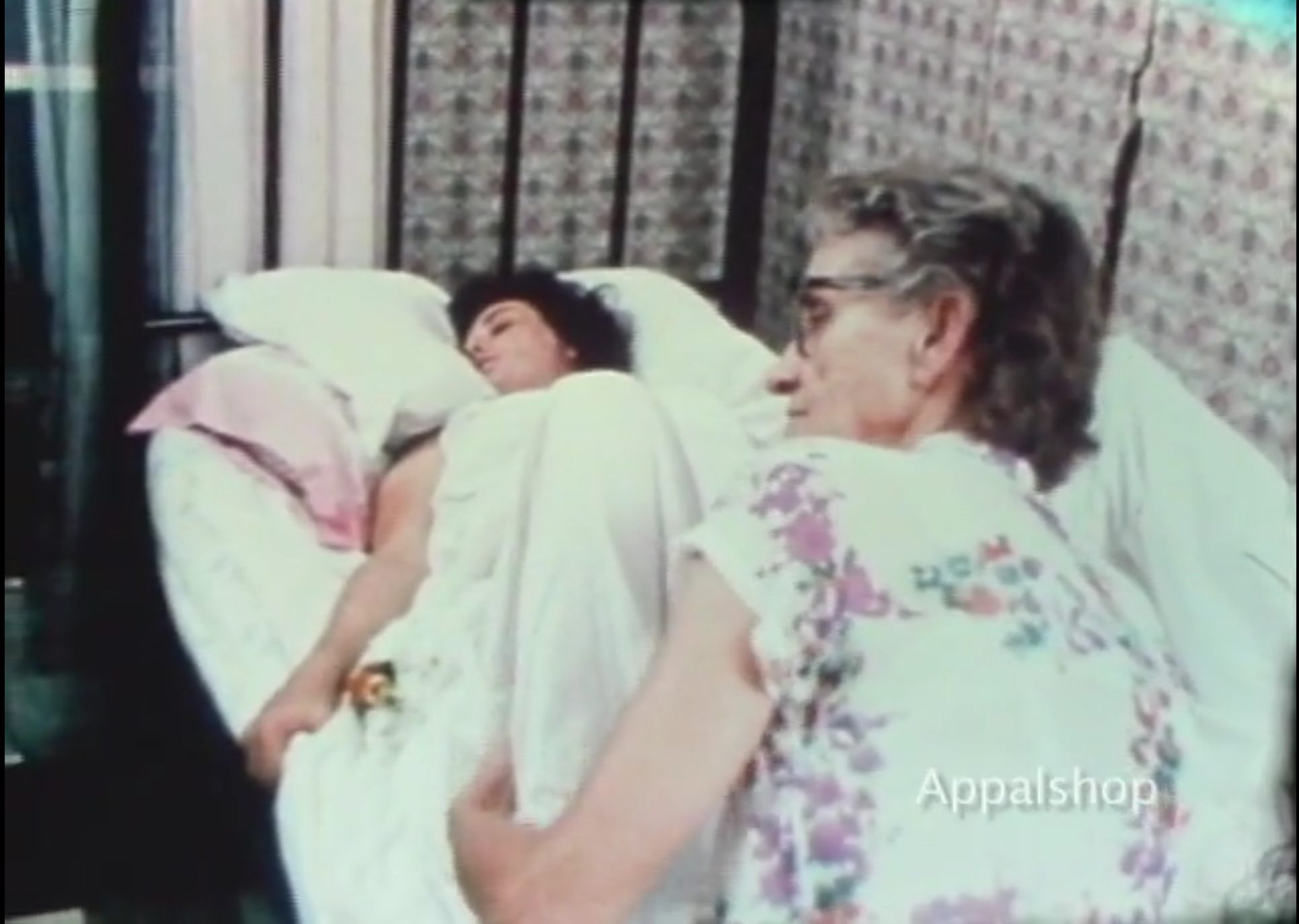 Many McCreary Countians are proud to see ‘Lena Stephens’ listed on their birth certificate as being the local midwife who delivered them into this world. Despite her passing fifteen years ago on November 16, 1995 at the age of eighty-five, Lena lives on in the hearts of many McCreary Countians. Lena’s career spanned sixty-one years from 1930 until 1991, and she was still delivering babies at the age of eighty-one. There are still many individuals alive today who were either delivered by Lena or were present to witness one of her deliveries. Heart-touching and often humorous stories about Lena’s deliveries have been passed down throughout generations of McCreary County families. Undoubtedly, these accounts will continue being handed down throughout future generations.
In this week’s edition, we’d like to share our readers’ memories of Lena Stephens-a very special lady.

“Lena delivered me in 1957 and my daughter, Holly, in 1983. When she delivered Holly, I had gone to the hospital and was sent back home! I think she also delivered four of my siblings.”
– Kathy Taylor

“My grandma said Lena had a sense of humor and used humor to ease stress and lighten the mood during labor of these young girls. Grandma recalled Lena saying to a couple, “Well, the baby was born without a penis. It’s a girl!”
– Teresa Lynn Kidd

“She was my mom’s midwife for me!”
– Tara Chaney

“Vada Ann Duncan went to her to deliver her fifth child, Pamela Duncan. She went three times before actually giving birth. The first time she went there were four or five different women in there going on as pregnant women delivering babies would. They were on couches and beds. Mom said those women scared the labor out of her! Mom told Lena she was going home. Lena said, “Honey, you can’t go home-you are in labor.” Mom went home, and in so many days, she started in labor again. The next time she spent the night and the labor stopped. She was the only one there that time and got to talk a lot to Lena. Lena had a little dog that cried like a real baby. Lena told about families for whom she had delivered all the children. The third time Mom went, Pamela was born. Lena told Mom to never go to a midwife again because of the difficulties with delivery. Mom said Lena was a kind and good hearted woman. She said Lena would sneak in and get Pamela to show people because she had such big, round eyes. Lena loved Pamela’s eyes, and Mom would hear her going on about Pamela’s big beautiful eyes. Lena would stop Mom on the street when she saw her just to see Pamela again. Myrtle Watters helped Lena deliver babies. Mom said many people never paid Lena anything for delivering their babies but that never stopped her from delivering the next one for them.”
– Charles Duncan

“Lena Stephens was my great, great grandmother. I was almost her very last delivery from what I’ve been told but my mom managed to make it to the hospital. Lena loved the Dairy Bar and would eat a hamburger for breakfast. She loved children and helped many, many people in addition to her deliveries. Lena could keep anyone entertained-even small children like me at the time. She was always working around her blue two-story house. The garage is still standing today.”
– Rebecca Meadows

“I had three of my kids there with Lena. The last one, Celia Abbott, took me a whole week. Lena made me walk round and round her house. When it came time for Celia to be born, Miss Lena had to go out and tell my husband, Tom, how to deliver a 10 ½ pound baby!”
– Carolyn Faye Abbott

“Lena was my great grandmother. Mary Lou Taylor was her daughter (my grandmother.) Lena would drive for miles to deliver babies from those who needed her and couldn’t afford much. She was very caring and selfless. I don’t know how many people I’ve ran into who have told me she delivered them. I’ve always heard positive things about her and her legacy. I’m very proud to say I was related to her.”
– Aretha Miller

“Lena delivered most of my brothers and one of my sisters. The most memorable birth was my brother, Mike. I wanted a little sister so bad. When Lena brought my mom home, I went down the hill to meet them and asked to take my little sister up the hill. Lena said, “I’m sorry, Viv, but it’s another brother.” She uncovered his head, and he had the most beautiful red hair. I thought he was the prettiest baby, but I told Lena to take him back because I wanted a sister. Lena just laughed and told me I had to take him because she couldn’t change him for a girl. Lena told that story for weeks! I didn’t get a sister, but I got to name the baby. Years later, Lena asked me if I remembered what had happened. I told Lena she had been right because I loved Mike even though he was a boy! Eventually, I got another brother and then a little sister.
– Vivian Stephens

“Lena delivered me. I was breech, and my mom was in labor for hours and hours. She delivered almost everyone in my dad’s famiy including my cousins born in the 1980s.”
– Christina Angel Hollis

“My mother gave birth to twelve children, and Lena delivered eight out of the twelve including me sixty-nine years ago. She also delivered my second child in 1969. Lena was a sweet lad. Money didn’t really matter to Lena. If you could pay that was fine. If you couldn’t pay that was fine because she would still deliver those babies!”
– Pernie West

“Lena delivered me thirty years ago. If it hadn’t been for her, I would have been a roadside baby. My mamaw said it was the best ten dollars she ever spent!”
– Keisha Hasty

“On January 10, 1970, we had a bad snow. They couldn’t get my mom to Lena’s, and Lena couldn’t get to us. My grandmother delivered me but was afraid to cut the cord. I was attached to my mother for hours waiting on Lena to get there. When she did get there, she cut the cord and finished the process (you know what I mean!) Lena is listed on my birth certificate as the one who delivered me.”
– Bobbie Jean Bryant

“Lena delivered triplets during or right after a tornado in the early 1970s. I was a young nurse and went with her to take the babies to Somerset hospital. They were immediately put in incubators and survived!”
– Fredia Stephens

“Mom went to her when pregnant with me. Mom said Lena ended up being down in her back so my dad delivered me while Lena told him what to do. It took mom a week to have me, and I weighed 10 1/2 pounds.”
– Celia Turner

“Lena was wonderful. She delivered my last son.”
– Zonia Campbell

“Lena was such a precious lady and a hard worker.”
– Katy Gilreath