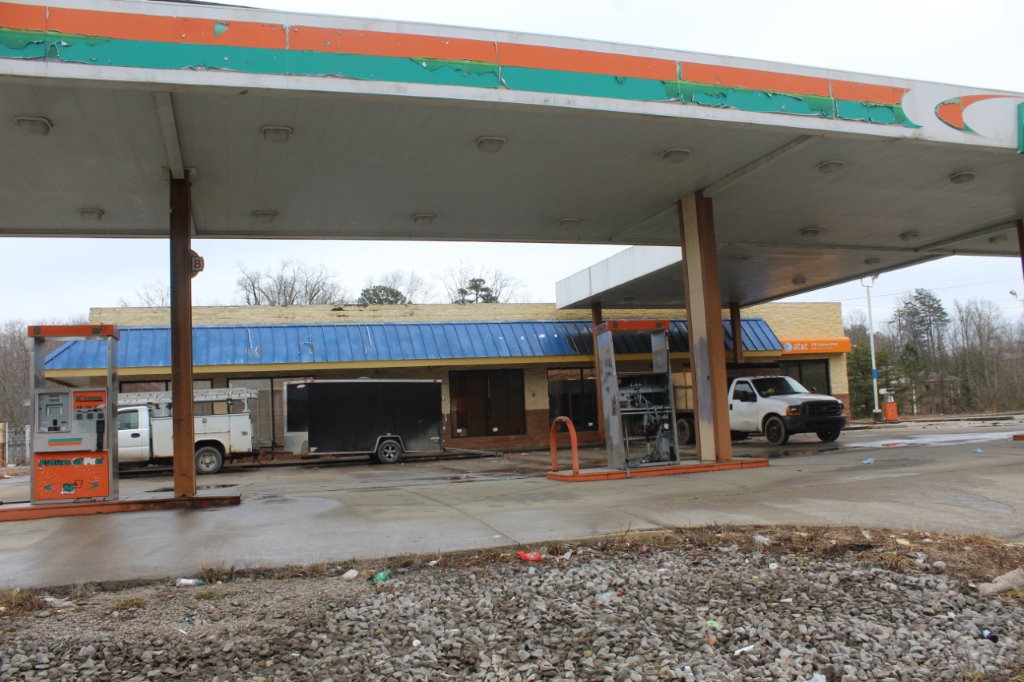 Photo by Eugenia Jones
A family from London, KY has purchased the former M3 gas station on HWY 27 in Whitley City. Workers are busy clearing the dilapidated building.

As a result of the Teleworks training and job fair, Nevels reported eighteen people gained full time employment.  Most of the eighteen were hired by General Motors OnStar and H&R Block.  Managers at Teleworks continue to work with thirteen additional individuals to place them in full-time positions.

Nevels spoke with several individuals who gained employment as a result of their participation in the workshops/job fair and received glowing reviews regarding the classes and Teleworks support managers.  Nevels said several single parents have gotten jobs after being laid off from the food service industry.

As a result of discussions with the lead Teleworks manager, Nevels identified three barriers to success which should be addressed prior to future Teleworks trainings and job fairs.  According to Nevels, the primary barriers are:

-For some, the lack of internet reliability and speed can be a stumbling block for effectively doing at-home customer service.

-With some McCreary County participants, the lack of access to modern computers is a definite barrier.  Nevels said more than twelve of McCreary’s prospective students did not have computers modern enough to pass the competency test the Teleworks managers use to assess equipment.

-Due to a lack of understanding that working remotely from home is a full-time, scheduled job, some class members are put off by the amount of work required.  Employment through Teleworks is full-time and involves either eight or ten hour days.  Typically, lunches and breaks are taken at scheduled times.

Based on his findings, Nevels made two major recommendations for addressing barriers and increasing the likelihood of success for McCreary Countians participating in future Teleworks opportunities.

First, Nevels recommended all Teleworks class members sign up for internet service which consistently offers the reliability and speed necessary to meet the demands of at-home customer service work.

Secondly, Nevels presented a plan for the future purchase (through future IDA funds or a Lake Cumberland Area Development District (LCADD) grant) of “modern” laptops and headsets needed for those who are hired through Teleworks.  Under the proposal, Teleworks employees could purchase computers from the local IDA and pay for them through monthly payments plus the 2-3% interest charged by LCADD.

After discussing the Teleworks program, Nevels reported that the SPEC building in Pine Knot has two companies showing at least some interest in the building/site.  Nevels is currently exchanging emails and phone calls with an Arizona-based company called Regenaqua that makes air and water filtration systems for factories, businesses, and homes.  Nevels has also made contact with AppHarvest which specializes in setting up massive indoor vegetable growing operations.

Nevels also addressed the OVC/Fibrotex Community Block Development Grant (CBDG) noting $530,000 of the grant has been spent.  The CDBG, which is administered but not funded by the County, will eventually result in OVC/Fibrotex making monthly payments to the McCreary County IDA.  Once the million dollar grant is spent, OVC and Fibrotex are required to repay the grant by making regular payments to the local IDA to support economic development in McCreary County.

According to Nevels, tourism is potentially still a major economic driver for the community.  Nevels and Tourism Director Michelle Perry are working to expand tourism county-wide.  The two have submitted photos and information about local restaurants, hotels, and AirBnb properties in an effort to spotlight McCreary County as part of the state/nationwide Kentucky Wildlands initiative.

The war against litter-a countywide problem that impacts tourism-is ongoing. The County recently began prosecuting illegal dumpers again, and Nevels feels the increased prosecution efforts have increased the number of residents who have signed up for garbage collection service.   Currently with 3,977 customers signed up, the number of residents receiving service is at an all-time high.  Nevels said he is working with residents to arrange a garbage pickup along HWY 90 to Cumberland Falls.

Nevels also reported on new businesses and developments in progress throughout McCreary County.  Nevels noted a family from London has purchased the M3 gas station in Whitley City.  A Dollar General store is being built in Strunk, and David Rose is clearing a large parcel of land at the entrance of the Appletree Shooting Range.   With lack of adequate housing considered a key barrier to recruiting industry and workers to the area, Nevels said he is working with local builders to get some new subdivisions constructed for middle income working families who prefer duplexes or apartments to trailer parks.  Nevels has been contacted by one individual who just purchased 285 acres near Cumberland Falls with the vision of building a subdivision.