This week, Kathleen shares memories of her life in the 1940s. 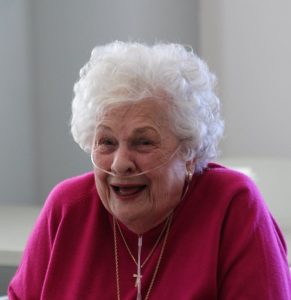 Photo submitted
Kathleen chuckles as she shares a story with friends.

“Back then, people got out and campaigned,” Kathleen recalled.  “They went around to the schools.  I campaigned with Mom and started shaking hands, smiling, and talking to people.  I loved politicking then, and I still love it!”

Kathleen recalls a local sharing a memory of one of her mother Cora’s first accomplishments as County Court Clerk.

“On Mom’s first day, she told Judge Rose she was going to pray before meetings,” Kathleen said. “She knew people would want it.”

After serving two terms as County Court Clerk, Kathleen’s mother, Cora, worked alongside Circuit Court Clerk Clarence Cooper in the Circuit Clerk’s office.  Cora, as a young widow, and Clarence married and were a well-known couple in McCreary County.  Their union eventually gave Kathleen another sister, Joan, to love.

Kathleen stayed busy in high school and remembers being one in a group of girls who helped with the War effort by using rolls of gauze to make 4 x 4 inch bandages.

During her last two years of high school, Kathleen worked at the Theater in Whitley City.  She was happy when she was promoted from selling popcorn at the concession stand to selling tickets from the ticket booth and remembers entertainers coming all the way from Nashville to perform at the Courthouse across the street from the Theater on Saturday nights.

Pie suppers were popular back in the day, and Kathleen’s pies were always popular.  She has fond memories of one young gentleman who spent a considerable “chunk of change” on one of her pies.

“He earned money by plowing gardens with his gray horse,” Kathleen reminisced.  “He made fifteen cents an hour when he plowed.  He came to one of the pie suppers with fifteen dollars and spent nine of them on my pie.”

The same young man spent even more of his “plowing” money so the two teenagers could go up for their first ride in an airplane.

“A man flew in on his two-seater, open Cessna,” Kathleen said with a grin.  “Everybody came running because no one had seen an airplane before.  The man charged $1.50 each for folks to ride.  The same young gentleman who spent nine dollars on my pie paid for us to ride.  When he rode in the plane, he lost his cap in the wind.  When he lost his cap, he said, ‘Well, there goes another fifty cents!’”

“I saw him for the first time at a restaurant down the street from nursing school in Lexington,” Kathleen recalled.  “He was at one table, and I was at another.  We locked eyes.  A few days later, I was walking down the street as he walking by on the other side.  He crossed over so we would meet head on.  From that time on, we were meant for each other-there was chemistry.”

Since Bill didn’t have a car at the time, the couple spent time just getting to know each other by chatting and sometimes walking to the theater to see a movie.  Kathleen remembers traveling to Pennsylvania at Christmastime to meet Bill’s family.

“I had imagined all kinds of romantic ways for him to ask me to marry him,” Kathleen said with a chuckle.  “When I went to meet his family, Bill picked me up at the train station. That’s when he asked.   I wanted it to be romantic, but he just reached in his pocket to get something for me.  Of course, it was a ring.  I wanted romance, and here he was driving on an icy road and just handing me the ring!”

Kathleen and Bill married in 1947.  Their first son, Gary, was born within the next couple of years.  Gary was later joined by brothers, Michael and Randy.

(In our next edition, “The Voice” will continue with Kathleen’s memories of her life in the 1950s.)