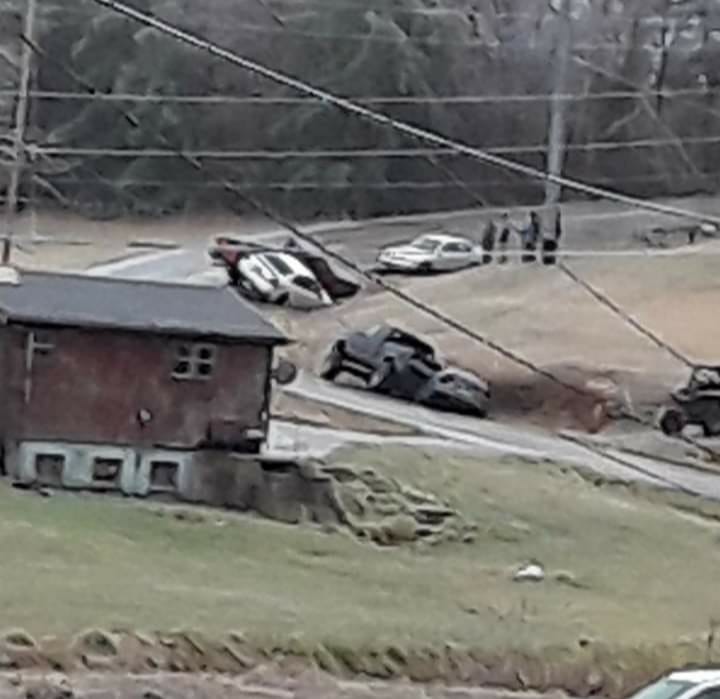 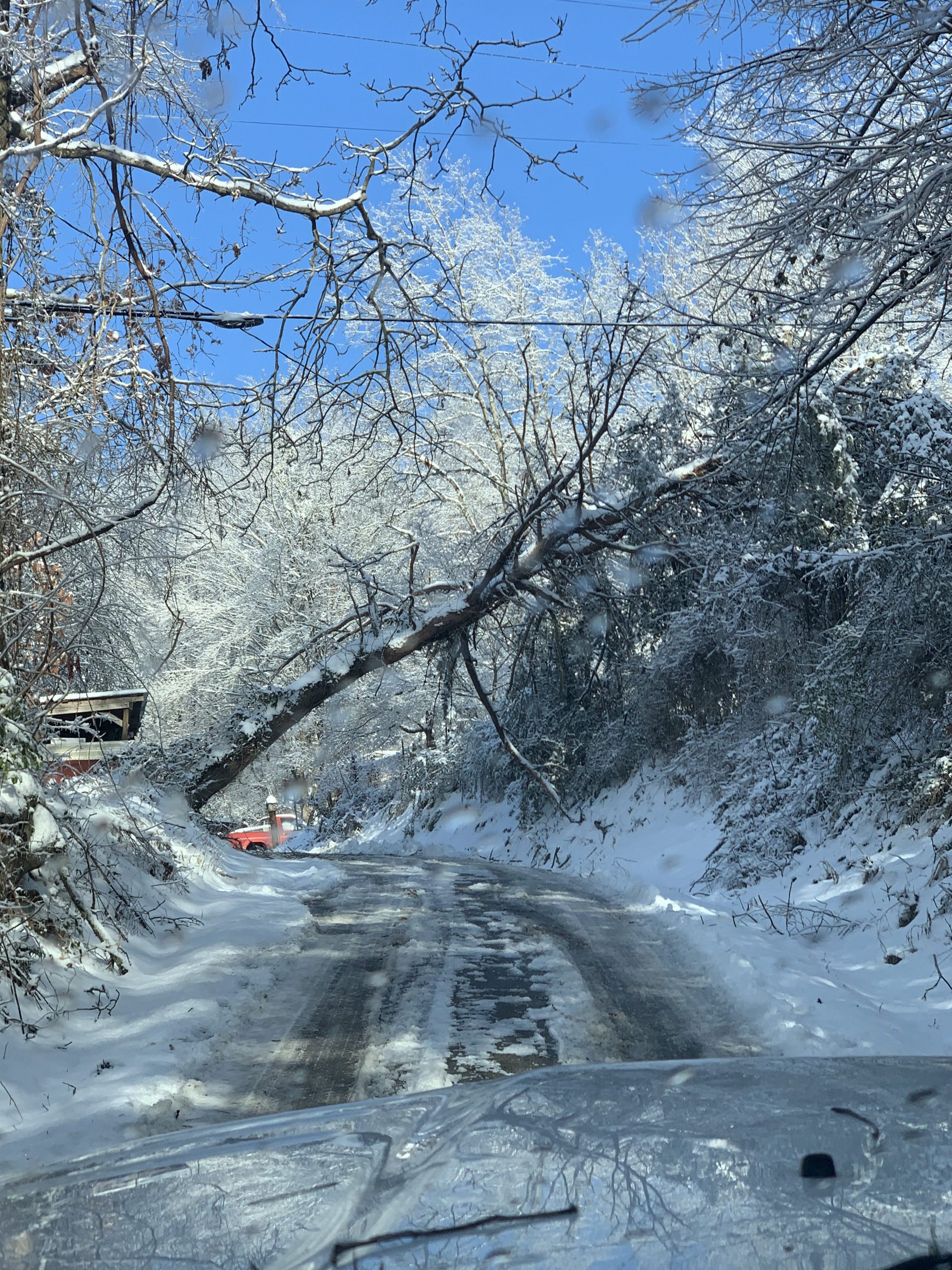 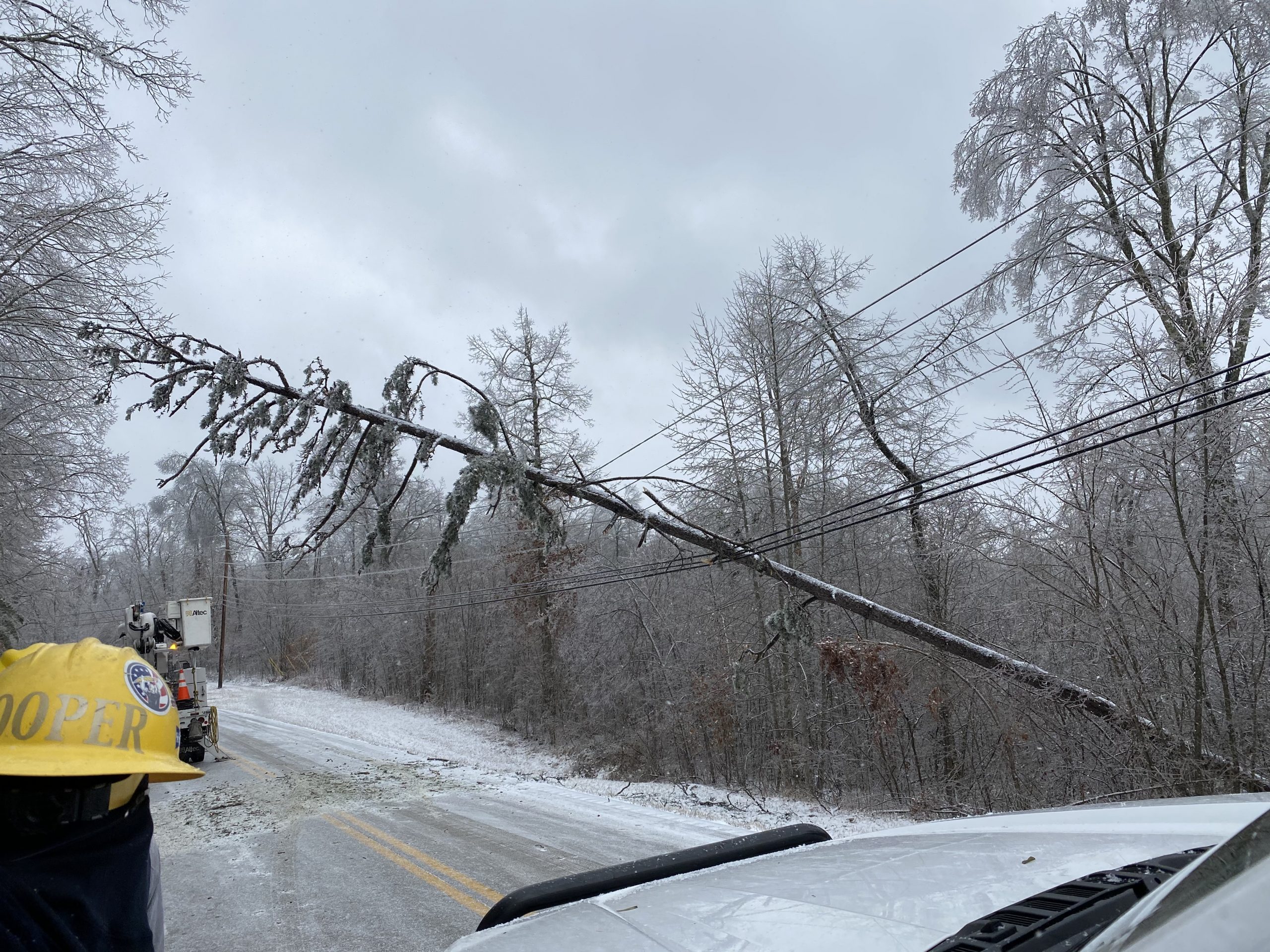 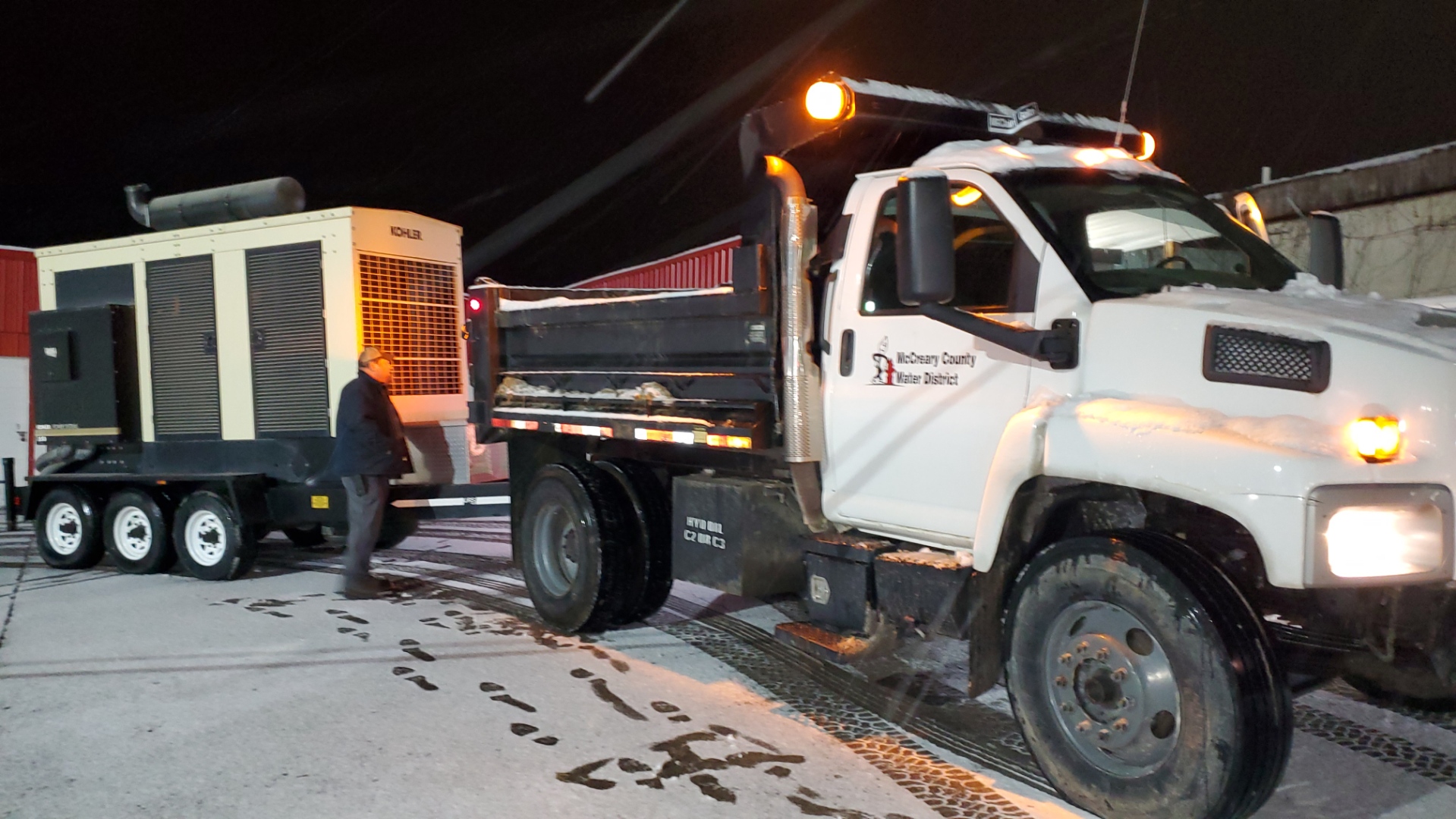 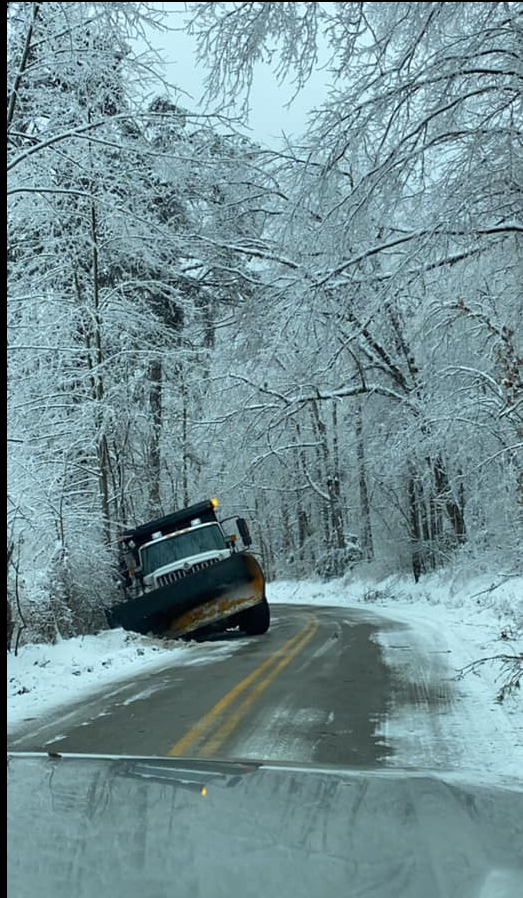 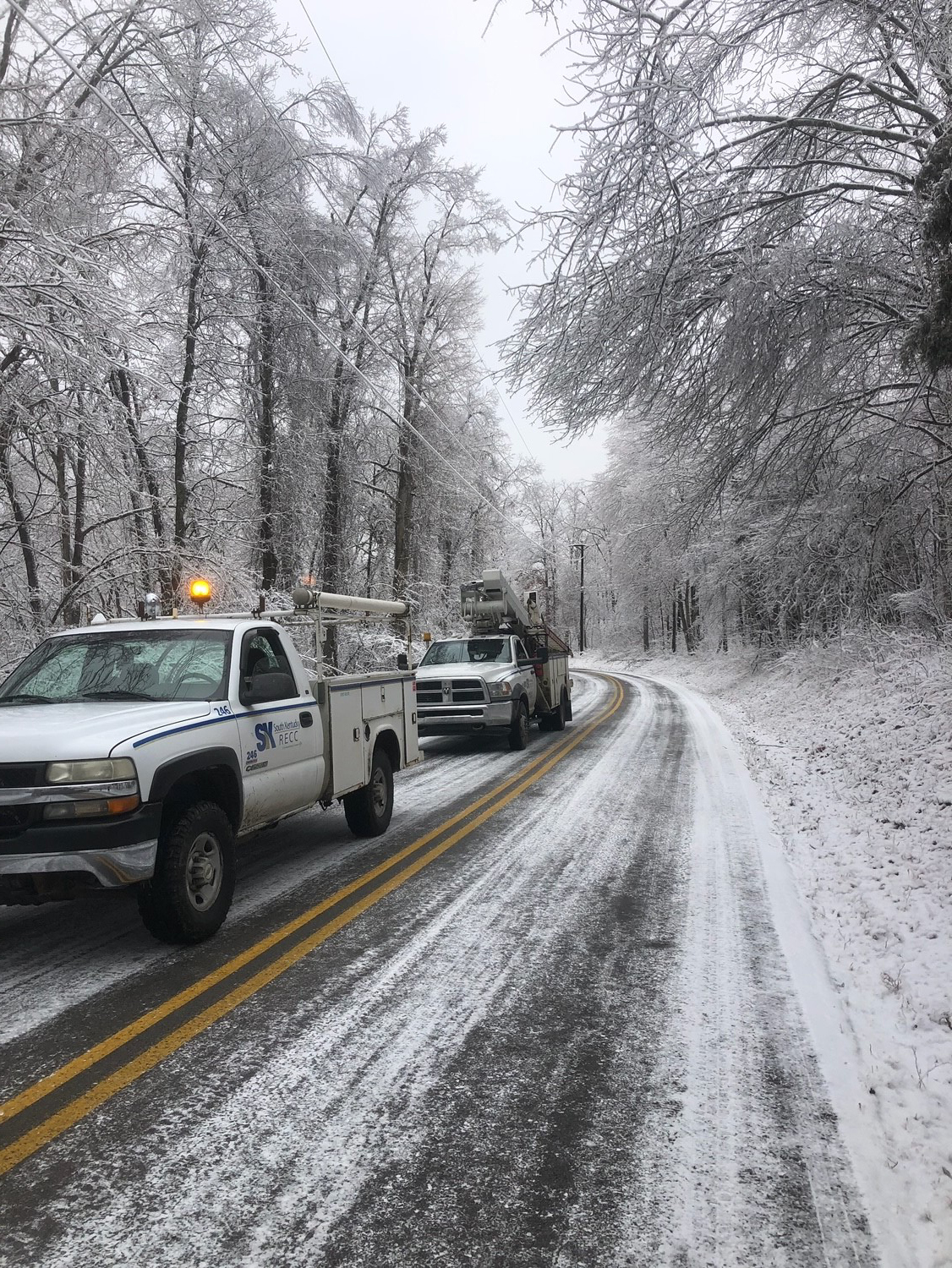 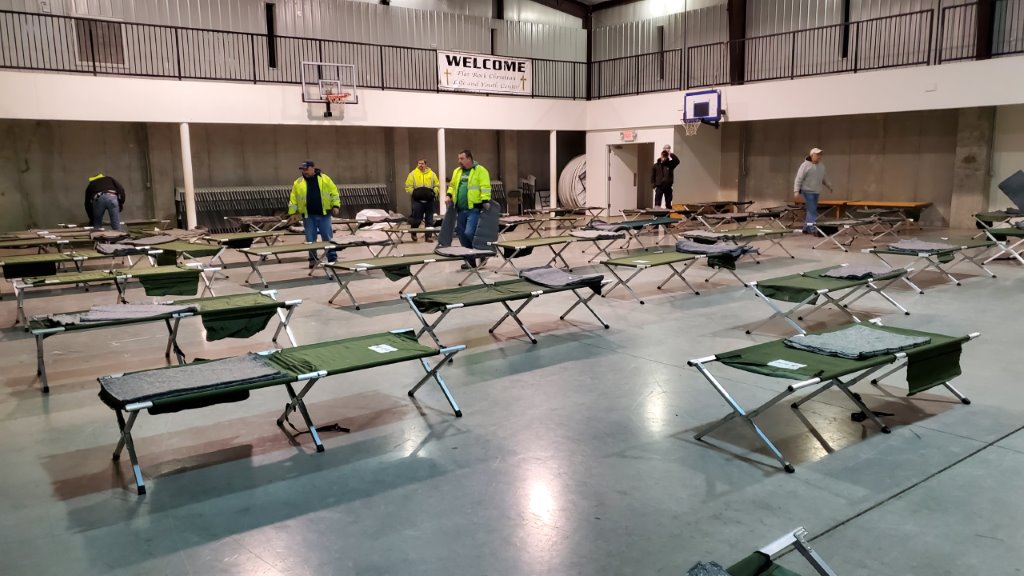 Local Red Cross coordinator Randy Dolen provided blankets, cots, and assistance in setting up cots in the Church gym. Volunteers are pictured (above) as they set up cots in preparation for arrival of the Cumberland Manor residents and staff. The evacuation began about 9:00 p.m. Tuesday night with everyone safely moved to warmth and safety by 11:45 p.m.

Three winter storms that brought ice, snow and frigid temperatures to the County last week left thousands without power. South Kentucky Rural Electric reported that at the peak of the outages about 21,000 outages were reported in their service area. By Wednesday, February 17th, SKRECC outage map showed McCreary County reporting over 3,000 outages, more than 50%, of the 6,222 SKRECC customers in McCreary County were without power.
McCreary County’s SKRECC crew of linemen worked to restore power with one contractor crew and one tree trimming crew until last Sunday, the 21st, when several crews from Georgia arrived in the County to help restore power to the less than 200 remaining customers without power.
Kentucky Utilities had outages of approximately 100 in the County and had power restored by Tuesday evening.
During the week of storms that began on Thursday February 11th until Saturday February 20, 2020, McCreary County law officials and fire departments responded to over 150 calls for assistance. The 911 Center fielded over 356 calls for assistance. McCreary EMS crews responded to around 100 calls over ice and snow covered roads during this difficult time.
The calls that came into the 911 Center ranged from vehicle accidents, status checks, downed power lines, trees blocking roads and needing assistance. The McCreary Sheriff’s Office reported working around the clock delivering medicine, groceries, doing status checks and taking people to warming centers. The Sheriff’s Office helped evacuate the Cumberland Manor Nursing Home to the Flat Rock Baptist Church where they helped set-up 50 beds for the residents.
Several fire departments manned their station houses around the clock ready to respond to the many calls that were coming in. Whitley City Fire Department kept their station manned and responded to emergency calls of all types including helping EMS ambulances get to patients on ice and snow covered roads. The North McCreary Fire Department worked all night Monday the 15th, cutting trees out of the roadways and later in the week helped extricate an injured electric worker. Pine Knot, Eagle Sawyer and West McCreary Fire Departments all worked tirelessly and responded to the situation with whatever the call warranted. All the fire departments in McCreary County are manned with volunteers.
The County Judge Executive’s Office with Judge Greene and Deputy Judge Nathan Nevels helped deliver groceries, cut trees on county roadways, helped with the warming center, helped evacuate the Cumberland Manor Nursing Home residents, managed the incoming calls and kept the Judge’s Office staffed with someone to take calls for assistance. Both officials worked every day, some days as late as midnight.
Emergency Management Director Stephen McKinney set up a warming center in the courthouse, for which he was able to procure from the State EOC a pallet of bottled water and 1,000 heater meals. He planned and executed moving the Cumberland Manor residents to Flat Rock Church, took people to dialysis treatment in Burnside and Wayne County, delivered gas for generators, dog food and farm supplies, propane and also helped with traffic incidents. After an 80 hour week McKinney said, “I have probably forgotten half of what happened, but it was a long week.”
Brenda Blevins, ABC Officer, Michelle Perry, Tourism Director and Megan Neal, Court Security Officer, helped by staying at the warming center covering shifts, some overnight, which helped keep the daily county activities going.
The County Road Department had six trucks running daily spreading salt. Tony Kidd, Road Supervisor, estimated 150 tons of salt were put on the county roadways. He said workers averaged at least 10 hours a day, including weekends, treating roads, cutting trees and helping ambulance crews get to patients.
The McCreary Water Department was able to keep the water flowing to houses and businesses with the use of generators. Kroger brought in a back-up mobile generator to keep the store operating.

The Voice experienced a first last week. It was the first time The Voice was not able to print a weekly newspaper in the 20 plus years it has been in existence. Electrical, computer/internet and cell phone outages prevented staff from working remotely or in the office, when staff could make it to the office, in time to meet our print deadline on Wednesday.