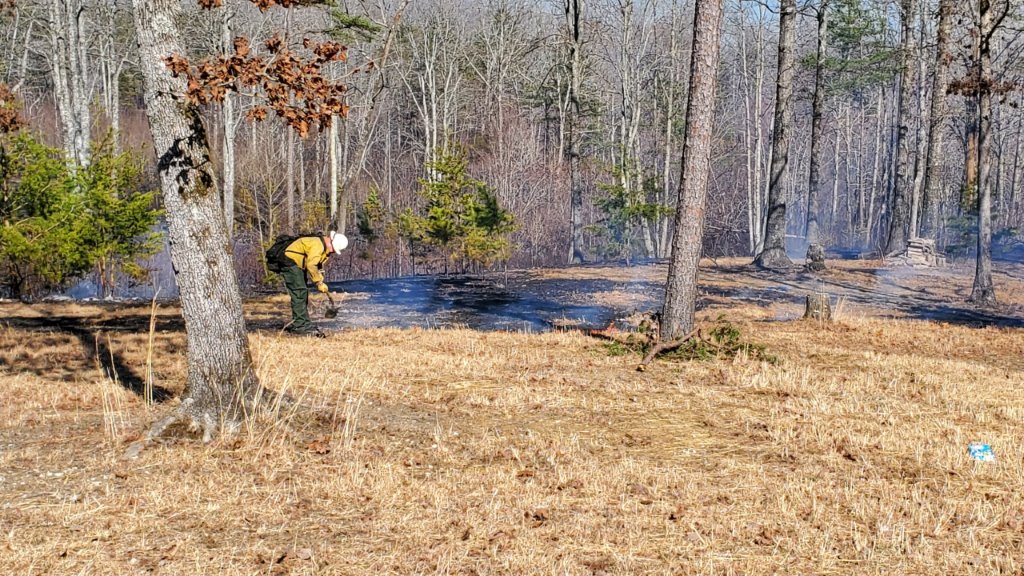 Photo by Nathan Nevels Forest Service Fire Fighter Mike Tapley is seen above digging a fire line to prevent it from reaching homes in the Edgewood subdivision at Pine Knot.

It didn’t take long for McCreary County to go from crippling ice to blazing fire as the U.S. Forest Service (USFS) responded last week to a forest fire located frighteningly close to the Edgewood Acres subdivision in Pine Knot.
Fire personnel used hand tools to construct fire containments and used existing barriers such drainages to contain the fire. The USFS fire helicopter was called to assist in lifting buckets of water from the Laurel Creek Reservoir to use on the fire.
Stearns District Ranger Tim Reed noted how quickly things dry out and change in the District with ice storms one day and wildfires burning a few days later.
With tree damage from the recent ice storm, McCreary Countians are eager to clear yards, etc., however, it is important to remember state fire restrictions.
During fire seasons (February 15-April 30 and October 1-December 15), residents are reminded it is illegal to burn anything within 150 feet of any woodland or brushland between the hours of 6 a.m. to 6 p.m.
According to the Daniel Boone National Forest website, safety tips for outdoor debris burning include:
• Check with local officials – outside burning may be prohibited.
• Check the weather – don’t burn on dry, windy days.
• Local fire officials can recommend a safe way for burning debris. Don’t pile it on the ground, it should be placed in a cleared area, away from overhead branches and wires in a screened receptacle.
• Debris should not be accumulated for several days and then ignited. It becomes compacted and wet, increasing the air pollution, and makes the fire burn longer, requiring more watching.
• Check local laws on burning debris. Some communities allow burning only during specified hours; others forbid it entirely.
• Consider the alternatives to burning. Some types of debris, such as leaves, grass, and stubble, may be of more value if they are not burned. Household trash should be hauled away to a recycling station.
• Be sure you are fully prepared before burning. To control the fire you will need a hose, bucket and a shovel for tossing dirt on the fire. Don’t hesitate to call for help if needed.