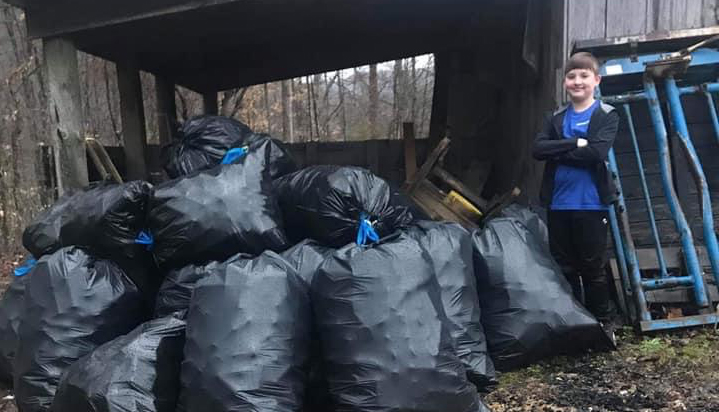 Photos submitted Parker Baird posing with the bags he filled with roadside litter during the #3BagChallenge. 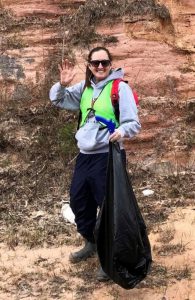 A McCreary County teacher and her fifth-grade students have started a service project that is becoming an annual tradition for the community: the #3BagChallenge.
Pine Knot Elementary teacher Tara Tucker launched the #3BagChallenge in 2019. She encourages her fifth-grade social studies students – accompanied by adults – to pick up three bags of trash. The volunteers take pictures of themselves at work and with their filled trash bags. The photos are sent to Tucker or shared on social media with #3BagChallenge.
#3BagChallenge began with Tucker’s lesson on civic responsibility, which includes volunteering. The lesson has gone well beyond the classroom.
“There is nothing better than getting outside and cleaning up your neighborhood because it makes it better for everyone,” said Logan Strunk, a fifth grader at Pine Knot Elementary. “I am super thankful for everyone that has provided all of the stuff to help us do the challenge!”
Tucker also thanked the local supporters who are providing rewards for Pine Knot Elementary fifth-grade students who join the #3BagChallenge. Outdoor Venture Corp., donated $500 toward T-shirts for participating fifth-graders. The McCreary County Fiscal Court is providing the pizza party and medals for all participants. Randy and Jill Dolen donated cash prizes for the students who collect the most trash.
“I would like to brag on those in the years past who have helped so much,” Tucker said. “In the two years we have run the challenge we have collected a grand total of 545 bags of garbage!”
Now in its third year, the #3BagChallenge will run March 8 until April 15. Pine Knot Elementary fifth-graders who participate will earn a pizza party, as well as medals and T-shirts.
Tucker invites citizens of all ages to join the #3BagChallenge.
“Everyone can do the challenge! Just post pictures of your cleanup with ‘#3bagchallenge’ on Facebook so it can be tracked,” she said. “Only the fifth graders at Pine Knot Elementary will take part in the reward, but everyone is welcome to participate.”
“This project is timed perfectly because we all are ready to get outside, and I think most of us would welcome the chance to feel like we are part of something positive these days,” said Tammie Nazario of PRIDE, the nonprofit environmental organization that provides the trash bags, gloves and safety vests for students.
“I encourage other groups to follow Ms. Tucker’s example and create their own ‘hashtag’ challenge,” Nazario said. “Pulaski County, for example, started the #PCSTripleBagChallenge for students last fall and will be doing it again April 19-24.”