Museum will operate The Artisan Shop 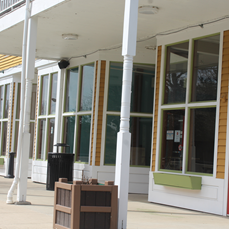 The Artisan Shop will open this spring in downtown Stearns to support local artists with artisan consignment proceeds dedicated to the McCreary County Museum. The shop, which will be staffed by approved artisans and other volunteers, will offer handcrafted items and accepted items such as home décor and souvenirs. Seasonally, the Polar Express Gift Shop will be incorporated into the Artisan Shop. The shop will be open Th-Sat. during business hours of the scenic railway.
Juried handcrafted items will be sold on consignment, and the McCreary County Museum Advisory Committee (MCMAC) has already created a consignment contract. Additionally, the committee has created a process for juried art.
According to McCreary County Heritage Foundation Board Member Debbie Trammell, the jury process is not intended to exclude individuals and their work, but rather to include those who work is considered exemplary. According to standards jury session information presented by Trammell during the March MCHF board meeting, The MCMAC will hold standards jury sessions in February of each year. Special sessions may be held at other times at the discretion of the committee. Artists will be notified in writing within fourteen days after submission regarding acceptance of their artwork for consignment.
Interested individuals should contact the McCreary County Museum for more information.
Additional business during the March (8th) MCHF Board meeting included the following:
-Received report that AML slide repair completion is expected April 1, 2021.
-Accepted resignation of Michelle Wilson Jones as a board member. Jones cited limited time and other responsibilities as reasons for her resignation but assured the board she would continue to volunteer.
-Received report on updated passenger cars (paint/windows). Chairperson Ray Moncrief noted the train will look like a new train during the coming season.
-Received report on golf course. Prices are expected to increase due to the rising costs of golf course operations.
-Discussed upcoming tourism season and scenic railway schedule.
The McCreary County Heritage Foundation meets monthly on the second Monday at 5:30 in the Outdoor Venture Corporation Conference Room.