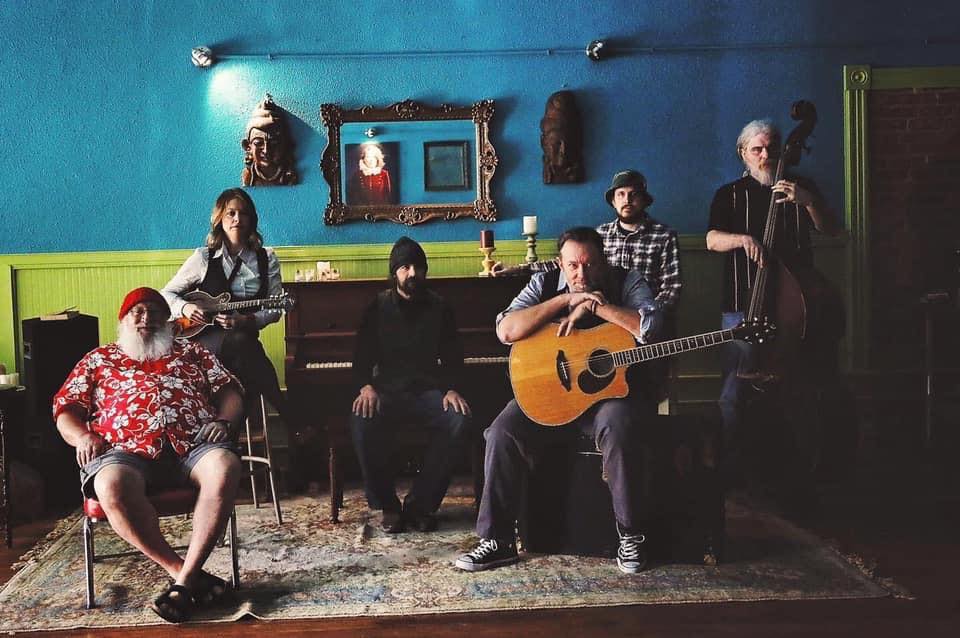 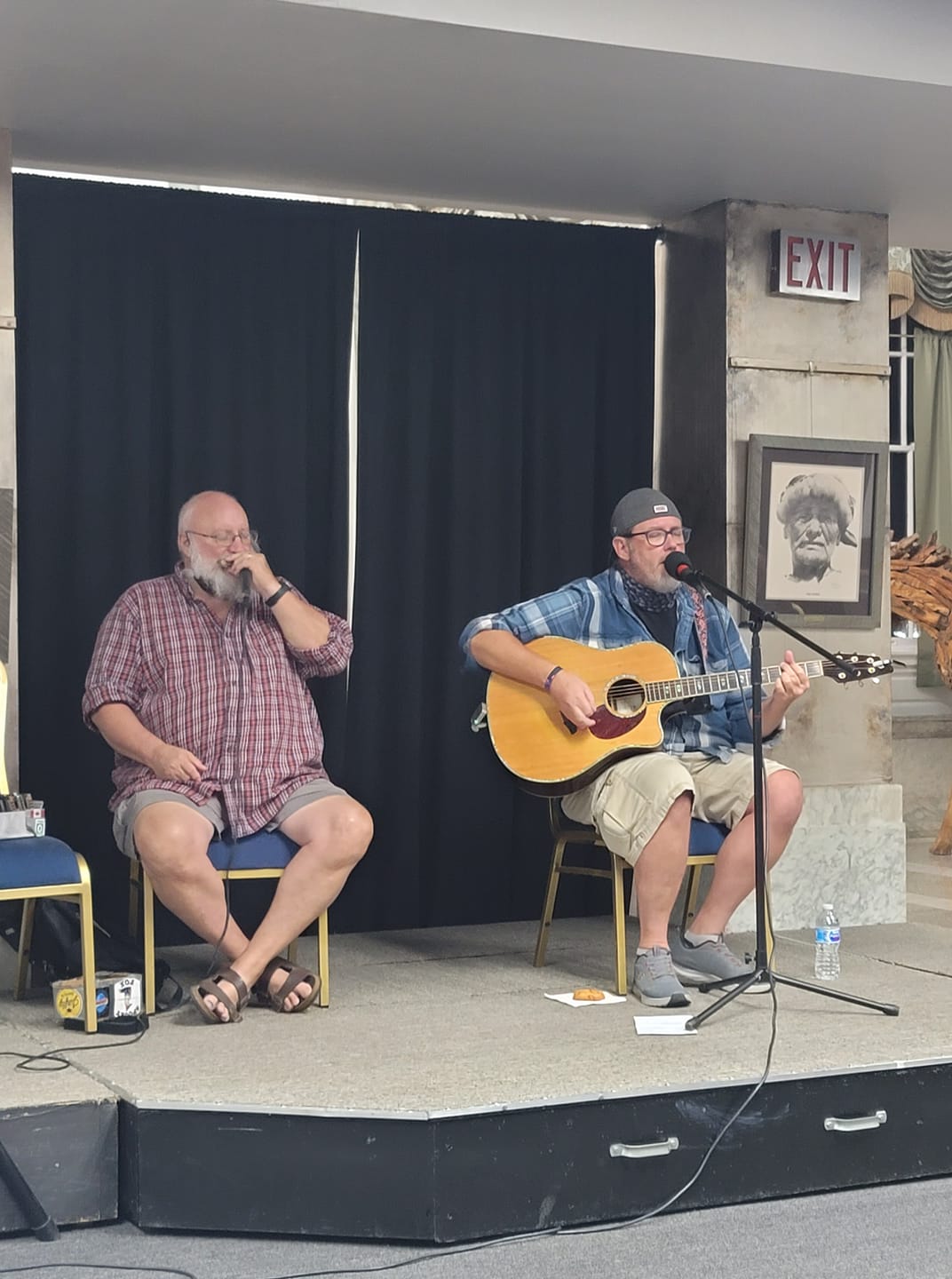 Dalton and Cate (harmonica) perform regularly at the Whistle Stop in Stearns. 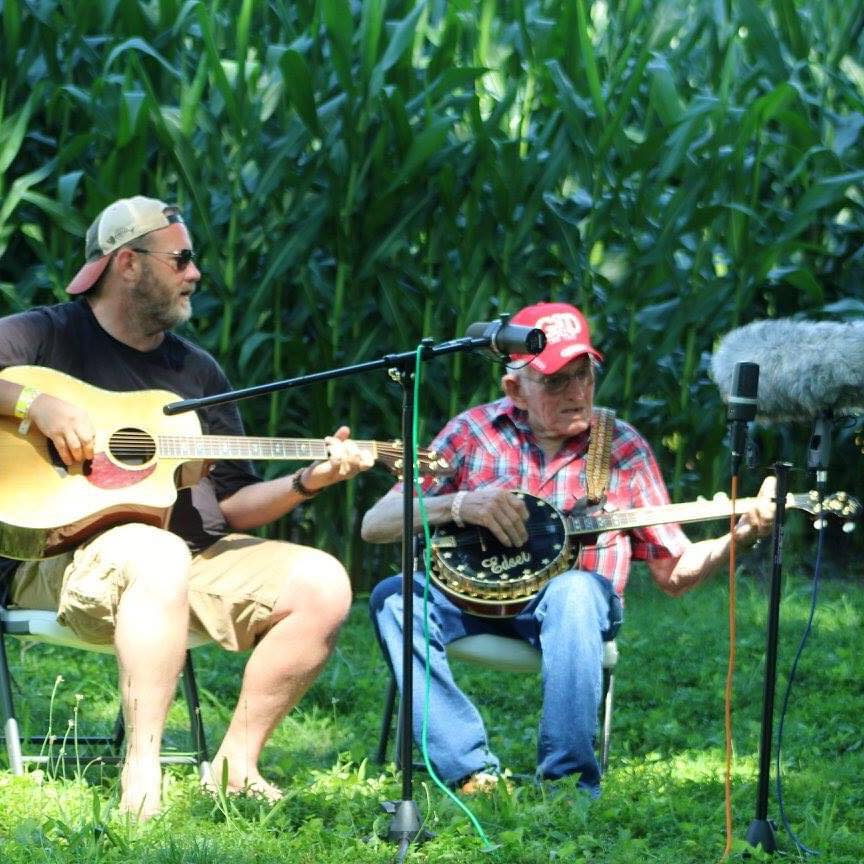 Dalton and one of his band members, Tommy Cate, were friends with McCreary County’s Edsel Blevins and performed regularly with him before his passing. Dalton played the banjo on a couple of the tracks on the award-winning album in honor of Edsel.

Two Pulaski County musicians who enjoyed performing with McCreary County’s beloved Edsel Blevins during his final years on earth received impressive recognition when they were awarded an Appalachian Arts and Entertainment-or Appy-award in March from the Mountain Arts Center located in Prestonburg, Kentucky. Edsel would undoubtedly be proud of his two friends-Kevin Dalton and Tommy Cate-who performed alongside him when he was honored as the 2017 Master Musician at the Masters Musician Festival in Somerset. He would be even more proud to know that Dalton played banjo in honor of Edsel on a couple of tracks on the award-winning album.
“I didn’t play the banjo proficiently enough to make it stand out,” Dalton said. “But it’s there.”
Pulaski County’s Kevin Dalton and the Tuesday Blooms walked away with the Appy award for “Best Americana Artist” after being nominated for their 2019 album,” Paper Airplanes.” Dalton wrote all of the songs on the album, sang lead, played guitars, and mandolin drums. He also recorded the album himself in his home studio.
“The album was a mixture of my life’s personal ups and downs over the past several years,” Dalton said. “In my case, a lot of downs but some amazing ups. That’s why I named it “Paper Airplanes.” A lot of paper airplanes nosedive, but occasionally one sets sail and has a decent flight. All of the songs are based on that concept with the exception of “Beneath a Jealous Moon” which of course I wrote for my daughter, Maggie. The band, Tuesday Blooms, was named after Magnolia (Maggie) being born on Tuesday. No matter what crashes to the ground, she is the one airplane, I know will always soar.”
The band includes Tommy Cate on harmonica, Owen Reynolds on bass, Cory White on keyboards, and Kelly Caldwell with harmony.
Cate is a self-taught harmonica player since he was a child.
“I can’t remember where or when I got my first one,” Cate said. “I just always had one.”
Additionally, Cate plays the guitar and owns a bunch of other instruments.
“Those instruments make noise but don’t really sound like music,” Cate said with a laugh.
Cate is known for his Santa Claus appearances at Christmas and is also popular for his live Jarfly Gospel Hour held in Somerset on most Sundays.
“I couldn’t have had a better bunch of musicians and human beings behind me through all of this,” Dalton observed. “My band deserves more credit than I do. They are amazingly talented individuals with many songs and even albums of their own. It’s great having them in my corner. We hope to start the next record soon. Not sure of its name yet but hopefully it will soar just as smooth as this one has.”
Dalton began playing guitar at the age of 6. He comes from a family of musicians on his mom’s side including his Memaw who played guitar.
“I was exposed to music at an early age and absolutely knew from the beginning it was something I wanted to do,” Dalton recalled. “I got really serious about playing around twelve years old, and spent most of my teenage years in my room teaching myself. I didn’t really start writing songs until I was 18 or so. I have written over 400 songs and released four other records. Two were with my previous band Faubush Hill which was really the start of getting back to my Americana roots.”
As a singer/songwriter Dalton has been featured in songwriting round at the prestigious Bluebird Café in Nashville, TN and has performed with many professional musicians.
Dalton and the Tuesday Blooms were up against stiff competition for their Appy award.
“We were thrilled to just be nominated,” Dalton noted. “We found ourselves in the same category with Grammy winners and artists that we greatly admire. I really didn’t think we had a chance of winning. Sturgill Simpson would have been my bet to win the award we won. We were absolutely shocked and thrilled when they announced our name. I’m still stunned by it, but at the same time, I feel deserving. The songs are all heart and soul. I try very hard to create a unique sound and the musicians I’m with make it happen.”
The Appalachian Arts and Entertainment Awards (Appy) are open to those living in or from the thirteen states in the 205,000 square-mile Appalachian Region stretching from Alabama to New York. The Appalachian Arts and Entertainment Awards Panel plays a key role in helping determine nominees and winners. The Panel is made up of highly regarded recording artists and industry executives. Up to five nominees in each category are selected by the panel based on their top average ratings with Fan Voting. Fan voting determines the nominee in all categories except one. The Panel then selects one winner in every category based on their top average ratings.
Prizes for the 2021 competition include: trophy/plaque, one year membership to Nashville Songwriters Association (NSAI), Scholarship to Big Sandy Community and Technical College, and recording/studio time at the MAC studio.