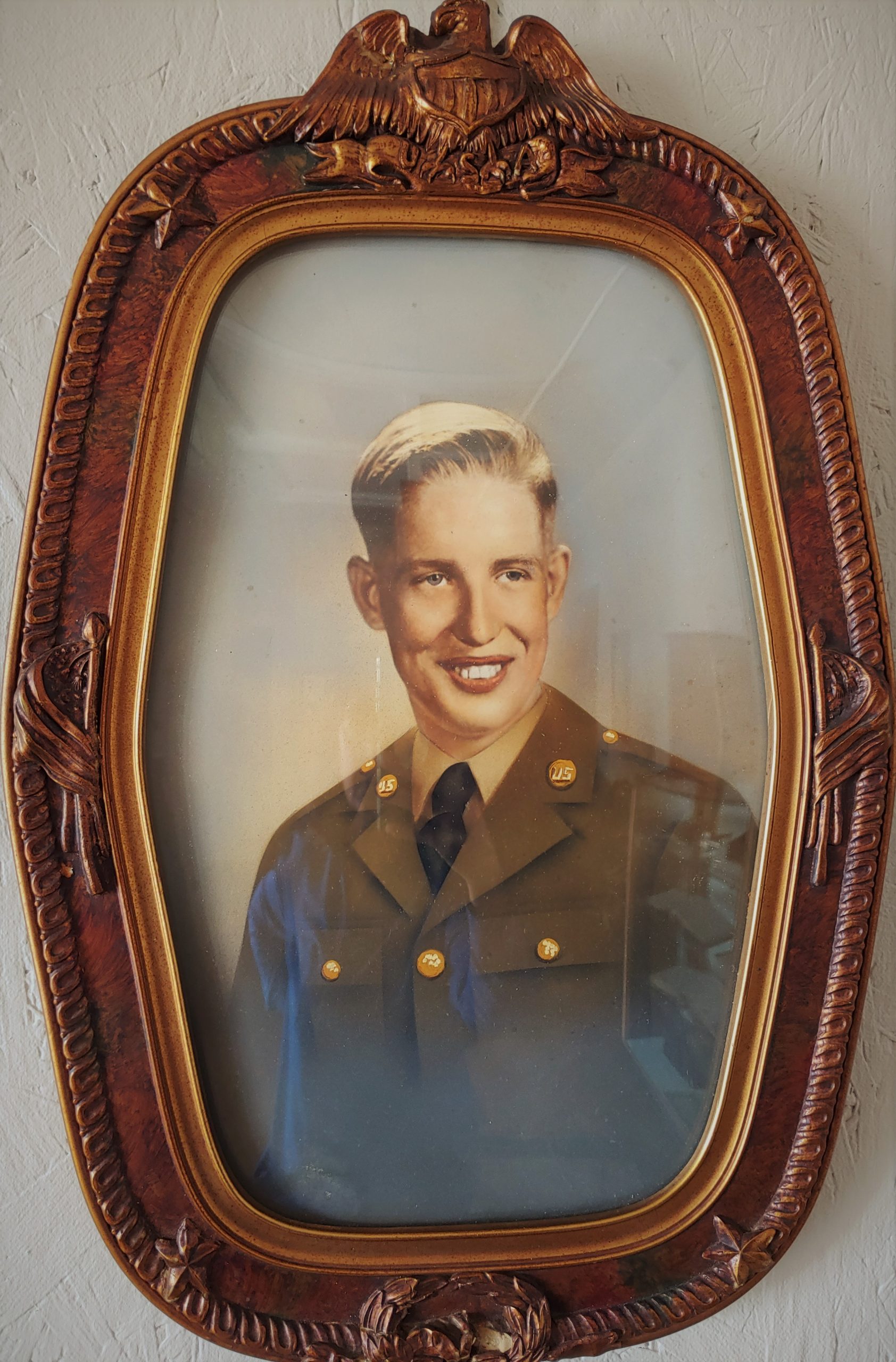 Hello mom and all,
How’s everything at home? Fine, I hope. Everything is okay with me. Well, I’ll be leaving here soon for California and then to Japan, but I will get a 13 day leave before I go overseas so I guess I’ll be home about Thursday afternoon any way. I hope so for I guess it will be the last one I’ll get until I get out of the army.
Lander seen Darrell Jones today and we are going over to see him tomorrow and I guess we will stay all day with him. When I get overseas, I’m going to make 50 dollars allotment for I will be making 96 dollars instead of 75, and then maybe I can make some money and save it. Lander is on cq tonight and I came down to stay with him awhile for it is Saturday night and I have nothing to do. I got a notice from the post office that I have a registered letter. I guess it’s from you. I never have got the fountain pen and pencil set that you sent off while I was home. I haven’t got but one letter from you since I got back from Christmas leave. I guess they got lost in the mail. Well, I guess I’ll close. Ans. real soon.
Love, Glenn
During the Korean War, William Glenn Spradlin answered the call to duty for his country. At the tender age of 18 Glenn was a young man away from home for the first time. He was an innocent young man full of dreams and aspirations for his future while eagerly awaiting news from home.
By August of 1950 he was in Korea fighting with the 2nd Infantry Division.
August 29, 1950 – Korea
Hello Mom,
I’ll try to understand your letter received the other day. Sure was glad to get it. It sure is hot here. I don’t know whether I can stand it much longer or not. Mom don’t worry about me. Which had you rather for me to do, come over here and fight or have them come to the United States and fight? Mom, you told me to trust in God. Well, the only thing that will get me back home is God and my rifle, and I have a strong feeling that I’m coming back.
I’m so sleepy that I can’t hardly hold my eyes open. I haven’t had any sleep in almost four days and you should see my clothes and my face. I haven’t had a bath or changed my clothes in over a week. Mom, you can send me stationary for I can’t get any over here.
Well, I guess I had better close. Hoping to hear from you soon and I’ll be seeing you as soon as we get these Communists back where they belong. Answer real soon and write every day.
Lots of Love, Glen
Six days after his letter dated August 29, 1950 PFC William Glenn Spradlin was killed in action on September 4, 1950. Private Spradlin posthumously received The Purple Heart for wounds received in action resulting in his death and The Bronze Star for heroism in ground combat in the vicinity of Changnyong, Korea.
Glenn Spradlin was born in McCreary County on October 7, 1931 to Ale Riley Spradlin (1906-1975) and Etta (Tapley) Spradlin (1906-1958). He had four siblings: Ale Orville (1925-1978), Leander (1928-1989), Roy P. (1939-1999), Shirley Faye (1942-2017), an Arnold Lee (1944-2000). By all accounts he was a kind, caring, and humble young man. He and his family attended Ross Grove Baptist Church.
The McCreary County Museum is honored to share some of PFC William Glenn Spradlin’s personal effects including The Purple Heart and Bronze Star. To further honor and remember this brave soldier, American Legion Post #115 will hold a military ceremony Saturday, April 10, 12:00 pm at the McCreary County Museum in downtown Stearns, KY. Several members of Private Spradlin’s family will be in attendance. Members of the public are cordially invited to join us in honor of this young man who gave his life for his beloved country.
March 4, 1952 – In Memoriam
Written in memory of my son who gave his life, a Hero of his country, in Korea September 4, 1950. Your sweet presence we cherish always; your face we’ll never forget.
He Is Just Away
I cannot say and I will not say, That he is dead – he is just away.
With a cheery smile and a wave of the hand, He has wandered in an unknown land.
Left us dreaming how very fair, It need must be since he lingers there.
So, think of him faring on as dear, In the love out there as in the love here.
Think of him still as the same I say, He is not dead – He is just away.
Mrs. Etta Spradlin, Revelo