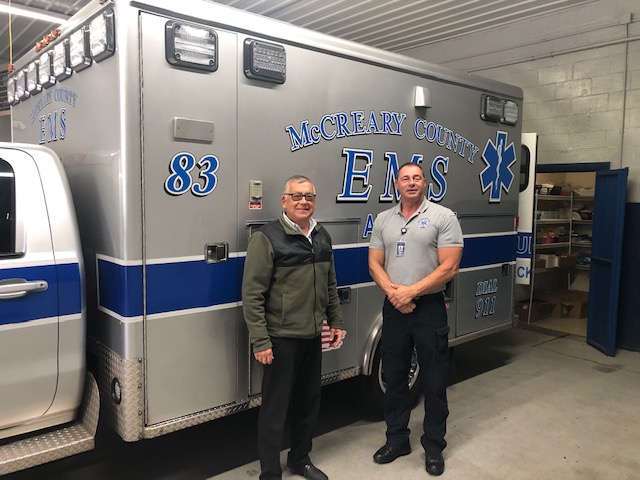 (In this edition, Judge Greene discusses the McCreary County Ambulance Service and E-911.)

The McCreary County Ambulance Service (EMS) under Director Jimmy Barnett’s leadership continues to grow at a phenomenal rate.
“The ambulance service completed an EMT class with a high pass rate and began a new EMT class with very promising students,” Judge Greene remarked. “They have increased training for employees and the public. There were twenty-seven classes of CPR (health care providers), sixteen classes of Heart Saver CPR and First Aid (layperson first aid), eighteen classes of advanced cardiac life support and eighteen classes of pediatric advanced life support.”
The McCreary County EMS is now affiliated with Louisville Metro EMS and is currently a training site for the American Heart Association. McCreary EMS has four CPR and Heart Saver instructors and one Advanced Cardiac Life (ALCS) and Pediatric Advanced Life Support (PALS.)
“McCreary’s EMS received new training equipment that will allow great benefit by improving classes and in-house training,” Greene noted. “They now have adult and pediatric advanced mannequins with the ability to let them practice skills, such as IVs, intraosseous, intubation, chest decompression, needle cric airway, wound packing, cardiac arrhythmia treatments, and medical treatments for several illnesses, lung, heart, and breath sounds. Additionally, they have also replaced three ambulances with new ones.”
The ambulance service has applied for use of pre-hospital ultrasounds. These ultrasounds serve numerous purposes with the main one being for trauma patients with internal bleeding. With McCreary County being so far away from a hospital with the capability of doing appropriate surgery, this equipment will allow the ambulance service to do an ultrasound, upload it, and let the receiving facility look at it before the patient and ambulance arrive. The receiving facility will know what is going on in advance. The ambulance service is already capable of doing this with EKGs. According to Greene and Barnett, the medical director has already approved the ultrasound equipment and agreed to training.
“We are just waiting on the Kentucky Board of EMS for approval,” Greene explained.
The ambulance service also received the McGrath Video Laryngoscopes which greatly help with intubation (a breathing tube for a ventilator.) This equipment helps with a difficult airways allowing quicker procedures and typically better outcomes. Instead of the paramedic having to maneuver around to see, the video laryngoscope has a screen and camera.
“Our ambulance service has some of the most aggressive protocols in the state for ground ambulances,” Greene stated. “This is very beneficial since our transport times are approximately an hour long. This year, EMS added medication administration of Zofran (for nausea), Phenergan (for vomiting) and Toradol (mild pain) for Advanced EMTs. Only Paramedics can perform that skill. We are still awaiting approval for several other protocols to improve services.”
McCreary’s EMS also received the Kentucky Board of EMS grant for $10,000 that was used for a truck remount. Additionally, EMS received the Assistance of Firefighters Grant (AFG) grant. Only 3.5% of these grants are awarded to non-fire affiliated EMS Services.
Judge Greene is quick to brag on McCreary’s EMS service during the COVID-19 pandemic.
“The ambulance service stepped up during COVID-19,” Greene said proudly. “Employees have pulled extra shifts, worked long shifts, and worked hard to do whatever else was needed to make sure we operate without hesitation. They did this despite having several employees in isolation or quarantine throughout the Pandemic.”

E-911 received grants totaling $19,946.42 to replace and update their GIS mapping system. The updated mapping system allows more input into the map, such as fire hydrants, mile markers, and landmarks. The update gives the dispatchers an advantage when it comes to accessing information for First Responders.
Additionally, texts can now be sent and from McCreary E-911 when phone calls are not possible. Anyone with a cell phone can text 911, and dispatchers can text back to get all needed information for first responders. This capability also allows location information.
The new upgrade to the phone system upgraded the recording system as well.
(In the next and final article of this series, Judge Greene will discuss economic development and his administration’s future plans for McCreary County.)