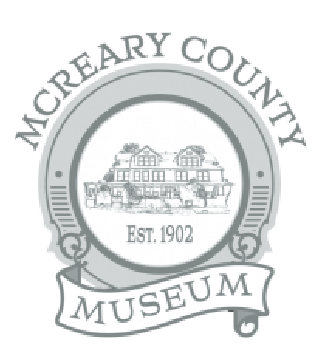 What’s In a Name?

The McCreary County Museum receives visitors from around the world, many of them seeking information about family members who lived or worked in our county. Recently, a man and his wife with the surname McCreary visited our county out of curiosity and inquired how McCreary County got its name and if McCreary was a common surname in our county. Interestingly, there are currently no families with the surname McCreary living in McCreary County.
The name of a county or town can disclose a substantial amount of information. A place name can be the result of an older settlement, a historic event such as a battle, or a geographical land mass. Examples of place names in our area are Bald Knob, Rattlesnake Ridge, Bear Wallow, Mud Cut, and Natural Arch. A given name for an area can be a testament to an earlier time or person, such as Stearns, Whitley City, or McCreary County.
McCreary County, the youngest county in the commonwealth of Kentucky, was named for James Bennett McCreary (1838-1918), a lawyer, Confederate officer, Kentucky Senator, Kentucky Representative, and Kentucky’s 27th and 37th governor.
An article about the potential forming of a new Kentucky county was published in the Interior Journal, a newspaper in Stanford, KY. The article stated that the Kentucky House of Representatives promptly refused to establish the county of Texas which was to be formed from Pulaski, Wayne, and Whitley counties. In June 1892, the same newspaper reported that Hon. Jon S. May presented a petition from the citizens of Pulaski, Wayne, and Whitley counties stating that when a new county was formed, they hoped it would be called Coal County. This name was discarded immediately since many representatives felt there were already enough pauper counties.
In February 1904, The Evening Bulletin, a Maysville newspaper, stated that the Kentucky Senate had passed a bill to create a new county from territory that was sparsely settled and where property values were extremely low. The name proposed was Thorne County after the 29th Lieutenant Governor, Wm. P. Thorne. A month later the Clay City Times published the same information. Four years later the Hopkinsville Kentuckian published an article about the new county and suggested the county be named Stearns County. A week later an article in Maysville’s Daily Public Ledger, stated the name would be Kenesee County.
The most significant early feature of the future county was the Jacksboro Road running from Jacksboro, TN to Point Isabel and Somerset. This pioneer road was an enlargement of the Tellico Trail, a route used by Native Americans for thousands of years. Several other trails intersected this road and led to the settlement of villages such as Pine Knot, Dripping Springs, and Flat Rock. The history of the names of these villages is interesting and may serve as the source of future articles in the Museum Memories column.
On January 20, 1910, the Clay City Times mentioned a bill to create a new county introduced by Representative Wm. B. Creekmore. The new county would be formed from sections of three surrounding counties – Whitley, Pulaski, and Wayne. Mr. Creekmore stated the reason behind the forming of a new county was that citizens had to travel 25 miles to reach one of the three surrounding county seats. The proposed name was Wilson County.
In March 1910, Stanford’s Interior Journal stated that Judge B. J. Bertram; Cecil Williams, editor of the Somerset Times; postmaster W.M. Catron; and Attorney J. N. Sharp protested before the Senate against passing the new bill. The reason behind their protest was “the only good to come of this would be to furnish nice fat offices for a hungry bunch of office-seekers in the territory”.
The Hickman Courier was one of the many Kentucky newspapers to publish articles about a new county with the subtitle County Named by People. In a short paragraph it was reported that the people of the newly created county had selected the name McCreary and were proud of the title.
The first mention of the youngest county in Kentucky was March 12, 1880. On March 12, 1912, thirty-two years later, the county of McCreary was formed after name suggestions of Texas County, Coal County, Stearns County, Thorne County, Kenesee County, and Wilson County.
Historic newspapers found on the Library of Congress website are excellent sources of information. To find out more about Wm. B. Creekmore, Governor James B. McCreary, county place names, or scenic areas in McCreary County please contact the McCreary County Historical Society, the McCreary County Public Library, or visit the McCreary County Museum.