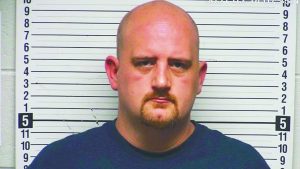 Jonathan D. Thacker, age 35, of Whitley City, working as a Deputy Jailer in Wayne County Detention Center was arrested by the Monticello Police Department on a warrant for 15 counts each for the alleged offenses of Official Misconduct 1st Degree (a Class A misdemeanor) and Promoting Contraband 1st Degree (a Class D Felony).
Thacker is accused of bringing contraband to inmates at the Wayne County Detention Center on multiple occasions during the time period 2/22/2021 through 6/23/2021. Wayne County Jailer Ronnie Ellis initiated the investigation after he and some of his staff found and seized some tobacco products and a small amount of controlled substance. Ellis sent a request to Monticello Police Department for assistance and according to MPD Chief Joey Hoover a warrant for Thacker’s arrest was executed. Two inmates have also been charged with Promoting Contraband.
Thacker will be arraigned in Wayne County District Court August 23, 2021. Thacker had been employed at the Wayne County Detention Center since February. Before that, Thacker had been employed as a transport officer for McCreary County