Community gathers to support one of their own 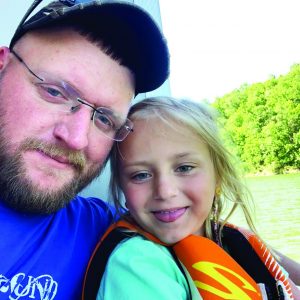 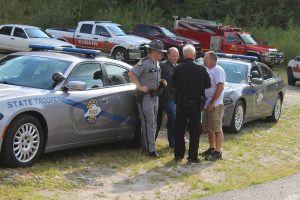 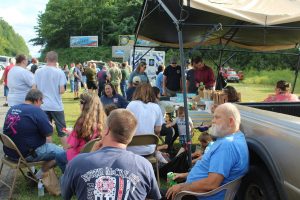 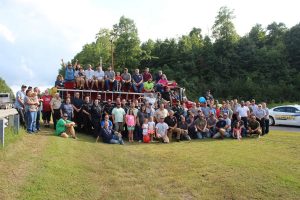 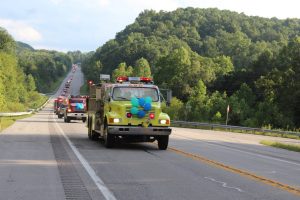 Photo by Eugenia Jones Firetrucks and police cruisers joined family and friends in expressing their love and support of Josh Goodin. Josh, who is Assistant Chief of the North McCreary County Fire Department and a Special Deputy for the McCreary County Sheriff’s Office, is battling cancer for the second time. He is known for his service, kind heart, and willingness to help others.

As the community gathered to
support one of their own, it was an
evening filled with emotion.
Along with the many family
members and friends who love him,
thirty-two year old Josh Goodin’s
family of first responders (including
firefighters from adjoining
counties) joined in a parade that
travelled slowly past his home with
lights flashing, sirens and horns
blasting, and heartfelt expressions
of love on display for the young
first responder who is battling cancer
for the second time in his life.
Designed to lift the beloved first
responder’s spirits, the event was
organized to show love and support
for Josh.
Friends, family members, and
first responders began by gathering
at the North McCreary Fire
and Rescue Helicopter Landing
Zone to honor Josh and purchase
concessions/give donations to help
Josh with medical expenses. Many
of those participating signed well
wishes to Josh.
Then, a parade of firetrucks, police
patrol cars, KSP cruisers, and
ordinary vehicles decorated with
banners and signs of support moved
slowly up HWY 27 to HWY 90 before
moving east on HWY 90 to
pass Josh’s home and journeying back to HWY 27 via Beulah
Heights.
At Josh’s house, the first
firetruck in the procession,
stopped, and over a loudspeaker,
boomed out the
words that echoed from
the hearts of all, “We love
you, Josh!” Several others
stopped and walked to the
house to speak with Josh,
who was forced to stay inside
because of his illness.
Presently the Assistant
Chief of the North McCreary
Fire Department, Josh joined
the volunteer fire department
at the age of 18. He is also
a special deputy with the
McCreary County Sheriff’s
Office, past deputy jailer, and
member of the McCrearyFest
Board. Josh is known for his
service to the community and
willingness to help others.
A fellow firefighter, Tony
Miller, perhaps best describes
Josh and how much
he means to the community
through these touching words
written after Miller visited
Josh during the parade.
“Earlier today, I went to
visit a rather remarkable
young man. Throughout his
life he has served his community
and the general public
in a number of positions.
Thinking back, I must say he
was rather diverse in that he
found so many ways to be of
service. Anyone who knows
him should be impressed
with his talents.
From the personal side, it
always impressed me that,
not only did he try his best
to do anything I ever asked
of him, but also that, anytime
he ever texted or called me,
the last word in his opening
line was “Sir.” Not that I expect
or deserve that title, but
it is a true testimony to Josh’s
upbringing. I know his parents
are proud of him, as they
should be.
But today, yet again, Josh
surprised me!
I saw the most courage I
have witnessed from anyone
in quite some time. Feeling
helpless in the circumstances,
I did what most do and
said “If there’s anything I
can do, please let me know.”
This young man thanked me
and said, “I reckon we are
good, we’re just waiting on
the time.”
No grief. No sorrow. Just
reality in accepting the circumstances.
This is true
courage.
My Friend!! I bid you God
Speed both here and in the
hereafter. You and your memory
will far outlive many of
us who make a feeble attempt
at our existence.
It is my pleasure to know
you, “Sir.